When I first reviewed the Trap Rock Restaurant in Berkeley Heights more than a decade ago, I predicted a very long honeymoon. Apparently, I was correct.

Because at a dinner celebrating the marriage of Prince Ludwig and Princess Therese (commonly known as Oktoberfest) the marriage bonds are still strong among the elements that make a great food/beer destination. Quality food, beer, service and ambience are essential to a strong bond.

Of course, some of the names have changed over time. Brewer Charlie Schroeder’s rubber boots have been walking for eleven years where Scott Sutera and Rob Mullin once trod. Chef Andy now works the scullery where other chefs have proffered their interpretations of Trap Rock’s culinary delights. And of course, the waitstaff changes, though the commitment to great service seems to remain a constant.

Charlie’s array of beers is growing, as is the demand for them. So much so, that plans are being made to expand production, according to Assistant Brewer Brett Crawford. Nine beers graced the regular menu, and three of them made it to the dinner list.

Jack O’Lager was a delicious, delicately balanced sweet potato beer that tasted remarkably like pumpkin and it accompanied a Traditional Creamy Chantarelle Soup in which crispy fried, cloth-poached dumplings swam. Considering that Founders Brewing was also in the house, it was an excellent pairing to begin the dinner.

House Made veal Bratwurst was augmented by Charlie’s Oktoberfest and my table partners all gave that pairing high marks as well. Speaking of table partners, three of mine had the distinction of having Trap Rock Beers named after them. That’s a neat (not to mention smart) way of building customer loyalty, and I was advised that at least three others at the dinner shared the naming honor. The main room was filled to capacity, and Charlie had to set up a long table in the next room to accommodate the faithful, so the strategy seems to have paid off.

Then it was time for a Dirty Bastard to come to the table. Ryan Staats, Founders Rep. (and a Jersey boy) was with us, and he allowed that in beer-making philosophy, Founders was “like the Dogfish Head of the Midwest.” He lamented in retrospect the fact that Founders hadn’t trademarked the “Bastard.” That lapse allowed breweries like Stone to apply the term to their beers. But no true beer lover will ever confuse the products, leastways those who know the difference between a Scotch ale and an American Strong Ale.
Without being arrogant, I felt the Dirty Bastard worked supremely well with Chef Andy’s Niman Ranch Pork Tenderloin Schnitzel and Spaetzle. So far, the courses and beers went three-for-three.

No Oktoberfest dinner would be complete without Sauerbraten, and this tender, succulent meat fell apart at the touch of a fork. I fell apart at the taste of Trap Rock Oak Leaf Bourbon IPA. Housed in a maker’s Mark Bourbon barrel that cost less than $100 and is paying for itself every day, this beer was well-balanced and passed the four-senses test quite nicely. Even an untrained nose could catch the Bourbon notes after three months in the barrel, and the fact that it was made with all leaf hops lent it a subtle, delightful complexity, as well as a distinctive finish. Four for four.

Dessert time, and Founders Breakfast Stout got the nod to accompany Schegel’s Farm Three-Apple Strudel with walnuts, raisins and maple crème anglaise. Most folks like coffee with their breakfast and dessert. Some like chocolate. Breakfast Stout had both, and enabled Trap Rock’s Oktoberfest dinner to go five-for-five. 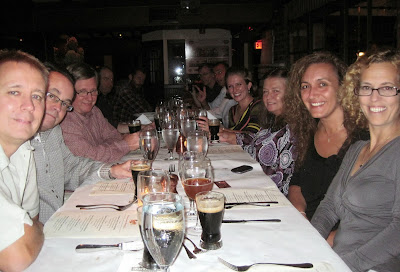 The days may be getting shorter, but the folks at the Trap Rock Restaurant are providing sufficient light to brighten the night. They do it with a combination of great food, great beer, great service and tasteful ambience that has attracted and kept a loyal following.

And created a seemingly perpetual honeymoon.