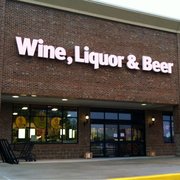 There is almost nothing good than can come from dropping a bottle of Left Hand Nitro Milk Stout at the checkout counter and having the resultant explosion reverberate through the store.

Because if I hadn’t dropped it, I wouldn’t have had the chance to meet manager Sean Bowling, who, perhaps by dint of the nitro explosion, appeared magically at the scene to supervise the clean-up and to allay my fears of a beer fatwa being laid upon my head.

“Happens all the time,” said Bowling. “No problem. We’ll get you a replacement.” By “we” he meant the JWG Wine and Spirits Store adjacent to Wegman’s in Woodbridge, where, ahead of the “historic storm,” I traveled near my home to lay in a supply of good, warming beers for the blizzard (hereafter known as the “Fizzard”).

But beer writers—and apparently professional meteorologists—don’t have crystal balls, so I wanted to be prepared. Hence, the Left Hand Nitro Stout in case the snowblower and the generator resisted a wake-up call from their summer slumber.

The store, which operates under the banner of Wegman’s Wine, Liquor and Beer is attached at the hip to the food giant’s building.

Bowling offered, “We are actually a completely separate store, as NJ law does not allow us to be in the Wegman’s and does not allow Wegman’s to own more than two licenses. We are connected to the store and we feed off each other much the same way a Kohl’s may be next to a Dick’s Sporting Goods or a Target may be next to a Michaels.  That being said, we have been open for almost 3 years in this location.”

I know that time is correct, because when it first opened about three years ago, I stopped in to an advertised beer-tasting with some friends and was impressed with the beer selection. I even asked the manager at the time if I could come interview her and do a story, but for whatever reason, the interview and the story didn’t happen.

Until I dropped the bottle of Left Hand Nitro Milk Stout. 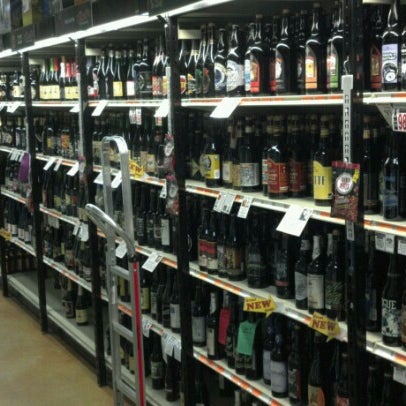 I asked Sean how many beers were on hand and he said six hundred, which prompted my follow-up question about the demand for craft beer, its impact on “traditional beers” and its concomitant demands for more floor space.

Bowling said, “The craft beer section is definitely growing by leaps and bounds but the category as a whole is increasing meaning much of the traditional domestics are also on the upswing.
Regarding the floor space issue, he said, “Absolutely! Like wine, the more people explore and try, the more they want to explore and try and our goal is to stay one step ahead of them by offering a great selection while also not looking past our traditional customer.”

So who decides which beers will make it onto the floor?
“Consumer demand is always first and foremost and of course we try and mix in some new items that are interesting to us that may start with no demand and build from there,” said Bowling.

He added that the store still does beer tastings on Sundays between Noon and 2 PM. As to what kind of beers get sampled, he said, “We look for beers that go well with the store concept – items that pair well with food and that interest us in general.”  Bowling announces those tastings via store signage and email, so to be kept in the loop, stop in and sign up, as I did.

It turns out that Bowling also knows a thing or two about pairing beer with food, which would make having a Wegman’s next door very convenient. And I’m sure food shoppers who like beer and wine are just as happy about the relationship. Symbiosis, after all, is a beautiful thing.

Some folks buy food and then ask what beer would go well with it.
The PubScout does the reverse.

And they all go well with the dish on the left.

I doubt if there is anyone of beer-drinking age who has not heard of “renting a beer.” That’s because beer and kidneys have a long, storied—and often humorous—relationship.

And it was just that relationship that motivated me and my beer/biker buddy Natalie to motor down the NJ Turnpike to Cherry Hill and the Forgotten Boardwalk Brewery.

As you can see by the badge at the right, my son is in need of a kidney transplant, so any event with volunteers who have sacrificed kidneys to save someone’s life gets my attention. That there is beer involved seals the deal.

Jamie Queli, the face of Forgotten Boardwalk Brewing (sometimes sharing billing with a feral cat named Growler) was not only proffering her beers, she was celebrating the ninth anniversary of the Gift of Life one of her brewery friends—Seth Dolled—gave to his mother Sharon when he donated a kidney to save her life.

I met both Sharon and Seth yesterday at this event along with others who have been impacted in some way by kidney disease. There were other donors, like Satyra, a volunteer from the Gift of Life Donor Program, who avowed that if she had one hundred kidneys, she would donate every one she could. And there was table mate Jason, a beer drinking kidney donor who was getting along just fine, thank you, since saving the life of someone he may not have even known. Both Seth and Jason asserted that they are fine and feeling great—and just as able to enjoy good beer as they always were.

And there was plenty of that flowing freely in the boardwalk-themed space, complete with skee-ball machines. It’s actually housed in the cavernous building that was once home to the Flying Fish Brewery, now relocated to Somerdale.

Natalie and I, as members of The elite Refuge Club which grants special privileges to members, arrived ahead of the crowd. We each grabbed a flight, and The PubScout was mightily impressed that this very young brewery was putting out some quality beers so soon. Brewer David Bronstein, who made his bones at Sly Fox is quite creative, and his beers were quite unique. 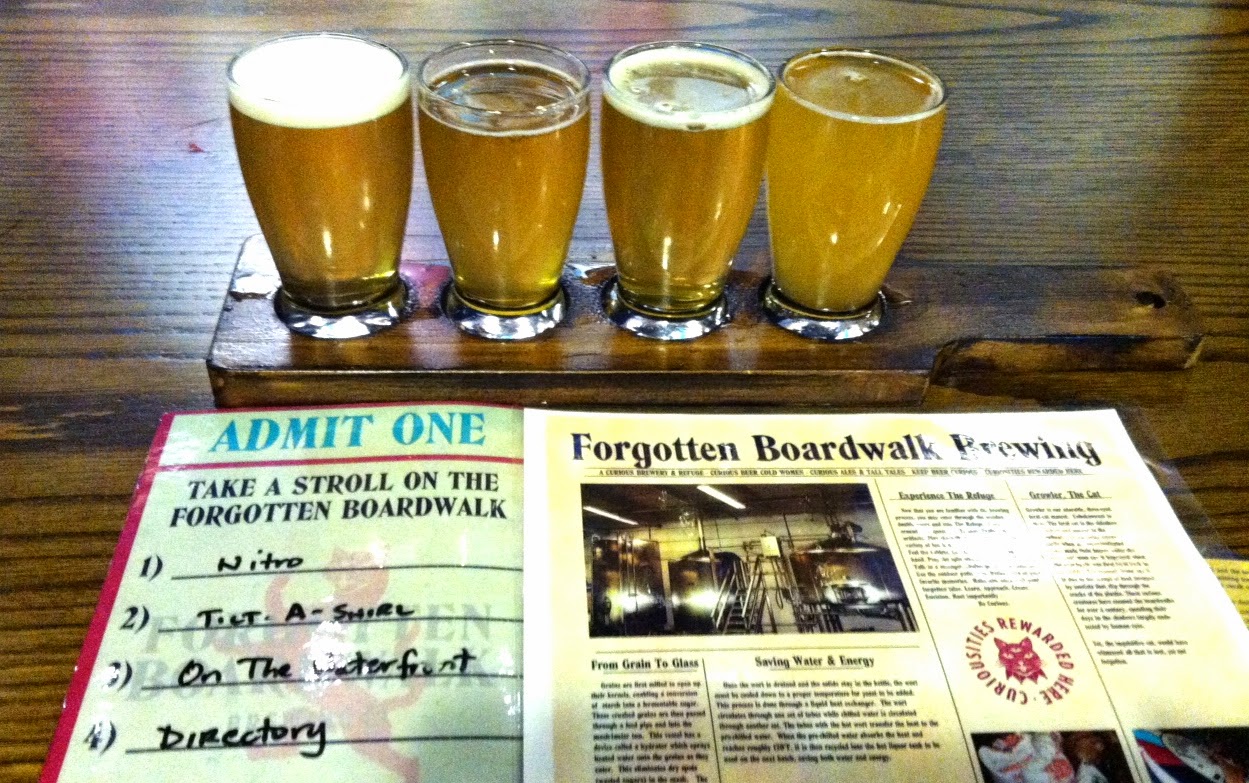 Funnel Cake Nitro with its vanilla cookie notes was quite good and very smooth, as was Tilt-a-Swirl and a citrusy, spicy Directory for Gentlemen. But The PubScout, not normally a quaffer of IPA’s in the bleak midwinter, was very impressed by the 1916 Shore Shiver, primarily because the hop character, while resiny and spicy, did not cause my cheeks to pucker back into my throat.

Jamie Queli, who once worked for a multimillion dollar company that built custom emergency vehicles—including two now used in the Presidential Motorcade—is the high-energy engine that powers Forgotten Boardwalk. But yesterday was not the first time I interacted with her. No, that opportunity arose when I sought three quality NJ brewers who would assist in supporting my kidney-transplant-needing son.

Without a moment’s hesitation or “sorry-but’s,” Jamie Queli jumped in. And the Spice of Life Event she held yesterday seemed tailor-made for this writer’s attendance. Speaking of tailor-made, the Spice of Life Beer created by Brewer Bronstein was outstandingly different. Using what Queli refers to as “The Butler” for a base beer, Bronstein added Amarillo hops and a healthy dose of locally grown habanero honey, provided by Spring Valley Honey. The result was distinctive, memorable and worthy of such an event.

Queli, as it happens, “is no stranger to charity events, having held multiple food drives, including one prior to receiving its state license to operate as a brewery, including a coat drive, donations to Sustainable Cherry Hill, a non-profit organization that fosters the global sustainability movement at a local level, as well as donating profits from the two Skeeball machines in the brewery tasting room to the Pink Boots Society as well as The Food Bank of South Jersey.”

Beer/biker buddy Natalie and I stayed for a few hours enjoying the beers, the company (which at one point saw people in pajamas playing skee-ball) and the visible support of The Cause.

If you see any of Forgotten Boardwalk’s beers on tap at your local watering hole, give them a try. I doubt you’ll be disappointed, and you can give your own kidneys a workout.

If you have one to spare, let somebody know.
Because somebody I know needs one. 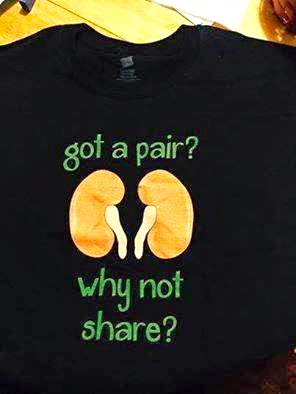 Trap Rock to Pair with DuClaw for "Fat Tuesday"

In a place The PubScout has called "reminiscent of an English Country Inn, there are some wonderful things happening. It appears Charlie Schroeder is adding to his considerable beer dinner resumé. And the food is ALWAYS topnotch!

The guest brewer for the Mardi Gras Beer Dinner will be DuClaw Brewing, of Baltimore, MD. They began brewing in Bel Air, MD, in 1995. After outgrowing that facility and a second brewery in Abingdon, MD, DuClaw Brewing Company is now housed in a large, state of the art facility on the outskirts of Ball’mer, dedicated to keeping up with the growing demand for their ever-expanding lineup of beers.They have brewed more than 35 unique beers and countless variations and blends.
Their motto, as printed on their bottle caps, is "“Craft be cherished, rules be damned."
The Mardi Gras dinner will be held on Tuesday, February 17th, 2015. Reservations will be taken beginning Tuesday, January 27th. Please mark these dates on your calendar.
More details will be shown on the beer dinner website at tinyurl.com/traprock as they become available.

Though his schedule is hectic, The PubScout is hoping to attend!

There was a Crooked Man... 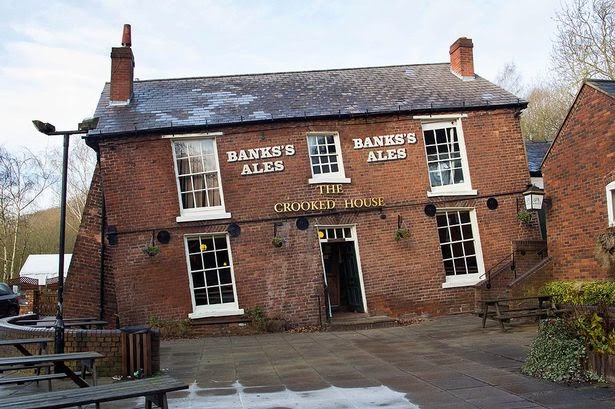 I understand that with the ubiquitous picture-taking smartphone, many pics might come out like this due to the picture taker's cockamamie view. But this was shot straight on.

In my quest to find unusual pubs, I suspect I'd be hard-pressed to upstage this one. I'd imagine that a lengthy session in The Crooked House might eventually make things seem normal. I'd also imagine that many pubs look this way to many pubbers who don't practice restraint, but this one is for real.

Read the story here. And check out this shot from The Crooked House web page...