Here's the skinny on this excellent opportunity to enjoy good beer while helping a worthy cause:

The PubScout will be there! Will you?
Posted by Kurt Epps-The PubScout at 2:11 PM No comments: 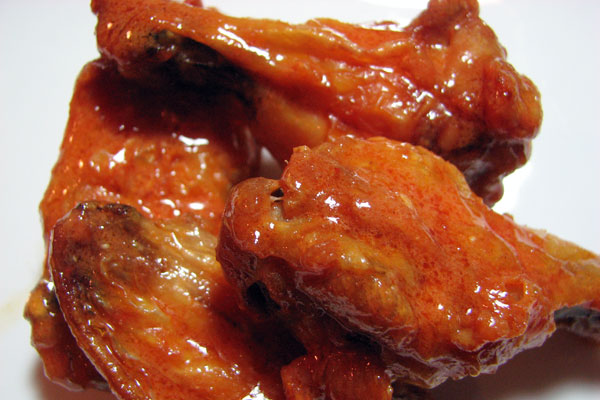 As a big fan of Mike Proske and Tapastre in Somerville, I signed up for an event last Sunday that, for all intents and purposes, was my very first “Wing-Off.”

Proske and Augie Carton of Carton Brewing had a throwdown involving the wings that emerge from Proske’s kitchen and those prepared by Augie himself.

There were four types of wings available--two from each proprietor.

The Vietnamese Caramel Ginger Wings from new chef Carlton Greenawalt were my first sampling and they were exquisite. It was no surprise to this writer that they won “Best in Show.” Tasty, sweet and flavorful, they should be a regular menu item; and since Proske has taken my suggestions on this score before, I’d look to see them offered.

The rest of the wing offerings were of various degrees of hotness. The Buffalo Wings were good, the Firebomb Habaneros (which gave me some trepidation) were better and the Silly Hots were, well, silly hot. Sneaky buggers, though, as the Hots weren’t initially all that overpowering. Not a fan of overpowering heat, my initial bites were very tasty and not overly hot at all. But I’m guessing that once on the palate, the Ghost Peppers used in their production kicked into high gear.

For a long time.

Which is why I’m just getting around to writing about the event today.

Close to fifty people showed up for the contest, using inside and outdoor seating, and all I spoke with were effusive in their praise.

Tapastre is a beer and food lover’s dream, which is why, like Arnold Schwarzenegger, I’ll be back. And I’m hoping those Vietnamese Caramel Wings are on the menu.
Posted by Kurt Epps-The PubScout at 2:32 PM 2 comments:

If You Bike It, They Will Come

Manager Charles Hunter joined the Tilted Kilt family in East Brunswick in December of 2012, and when he was sent for training at the corporate headquarters in Arizona, he was mightily impressed by the number of motorcycles that packed TK parking lots. Of course, the riding season in AZ is somewhat longer than here in Jersey, but the sight made a lasting impression on Hunter.
So, back in NJ, he proposed that his own Tilted Kilt sponsor its first Bike Night. Most bikers enjoy going where the food  and company is good, the beer is cold and plentiful and the view is often, well,  breathtaking. But Hunter decided to think bigger by reaching out to the community. He linked up with Liberty Harley Davidson of Rahway, which provided a Heritage Softail Classic to the event and the South Brunswick Lions Club to hold a raffle for the bike. After intensive negotiations with the management of the Brunswick Square Mall to do something  so avant-garde,  Hunter, who emphasizes the partnership of business and community, jumped into Bike Night with both feet. 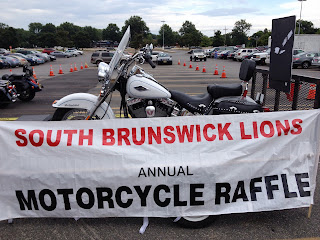 He roped off a chunk of the parking lot in front of the TK so bikes could have preferred parking. He initiated a 50-50 raffle with all of the house’s proceeds going to the Lions Club effort to assist the blind. And he waited to see what would happen, hoping a few bikers would show up. As we watched some rain clouds pass ominously overhead, he was visibly anxious, but he said he would use this event to learn what to do for next time. 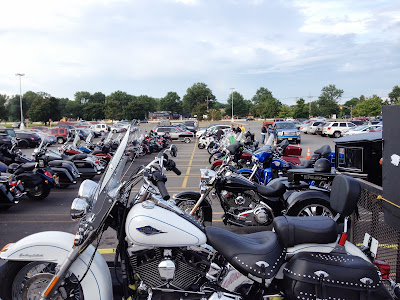 What he learned was that he needs to rope of a larger chunk of the parking lot. As the sun returned, more than one hundred area bikers descended on the Kilt, participating in the raffle, enjoying the food, beer and views, and even became cheering spectators at a pick-up game of Giant Jenga on the patio.
The crowd kept the lovely and friendly Tilted Kilt girls hopping—which hopefully translated into financial gain for them. There were Tilted Kilt guys there, too, working hard, but I somehow doubt they got the same attention. 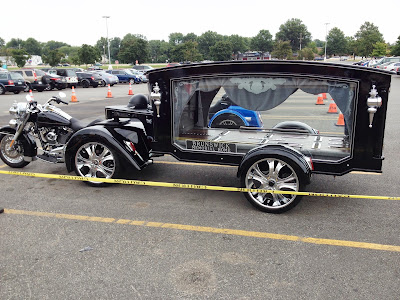 What did get a lot of attention was Michael Kulbacki’s Harley Hearse parked in the first spot off the patio. Everyone—and I mean everyone—looked at it, stopped to inspect it and took pictures. It has had so many modifications, HD no longer honors the warranty. Kulbacki, whose day job is as an airline pilot for United Airlines, moonlights as the director of the Brunswick Memorial Funeral Home. His tagline is “There for your ups… and downs.” Kulbacki, who says most of his “passengers” are elderly, transported his own 88-year-old grandmother to her final resting  place in the Harley Hearse—a $100,000 converted trike with a glass-walled, immaculate hearse trailer. “She never liked bikes, but she would have loved knowing that her elderly comrades talked about her last ride for weeks after she was laid to rest.” 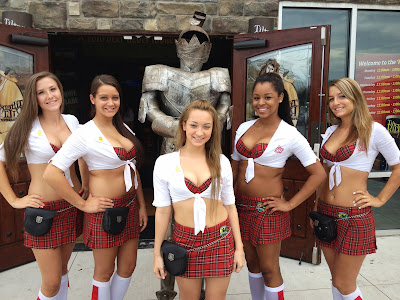 But  Manager Hunter had even more goodies in store, as every hour, his “Entertainment Ladies” would pass through the parked bikes and select an hourly winner of “Best Bike.” The winner would then benefit from a house giveaway, and the losers would benefit from reduced prices on selected libations.
Hunter has planned more regular Bike Nights—and even car shows. If his future “Event Nights” are as successful as this, the Tilted Kilt in East Brunswick will definitely be a biker hotspot—provided the clientele adheres to Hunter’s “Friendly Place Policy.” Essentially, fun, good behavior and no “colors.”
“We want to be known as a fun, friendly place to come to, as well as one that gives back to the community,” said the manager, whose anxiety had lifted considerably.

100-plus laughing, friendly, fun-loving bikers can do that to a guy.

River Horse gets past "hiccups" and opens in Ewing...Congrats and good luck!
Posted by Kurt Epps-The PubScout at 4:33 AM No comments: 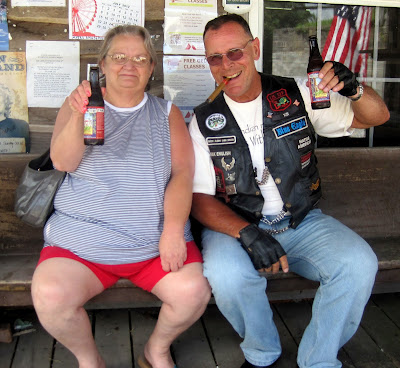 Science has long confirmed the link between good health and beer in moderation. As if in counterpoint to that data comes this news. Having already discussed this issue here, as well as having offered a solution, there is no need to repeat myself.

But sometimes these health folks persist with a perceived threat and go a bit too far with their own remedies, as the article above will prove. According to it, the best way to enjoy the outdoors is to eat garlic and drink apple cider vinegar?

Seriously? A diet like that will keep more than mosquitoes away, bunky.

But I did learn a new phrase: "off-gassing."
Through your skin.

My old-fashioned "off-gassing" was one of the main reasons the missus would remand me to the porch to begin with.

But that was OK, because I'd bring a cigar with me.
And there was nary a mosquito in the area who would venture into that chemical fog.

Which allowed me to enjoy my beer in peace. 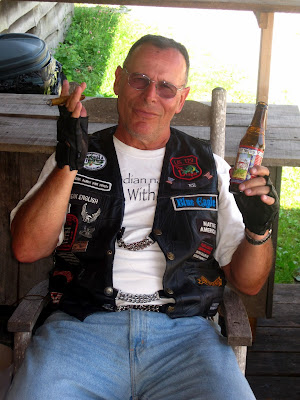 Calling Jon Taffer: Your Assistant is in the House! So there I was, at the comfortable bar in Isaac Newton's Pub, after Part One of an exhilarating motorcycle ride on another sparkling two-wheel day, enjoying a delicious Stone Farking Wheaton WootStout, and playing with my iPhone, Facebook and Twitter. when she came in.
She was petite, blond and looked about twenty-three.

"Is anyone sitting here?" she asked, pointing to the seat next to me.
"Nope," says I, surprised that such a comely lass would venture so close to a grizzled old guy in a patch-emblazoned motorcycle vest.
And she climbed up on the barstool. I went back to posting FaceBook and Twitter pictures of this outstanding 13% collaboration beer (which speaks volumes about my geezer priorities), and she ordered hers.

"I'd like some Lindemann's Framboise in the bottom of an Allagash White, " she told Tim Gannon, the barman.

That got my attention. What twenty-three year-old gal even knows about Lindemann's, let alone Allagash?

After she took a few sips, I turned to her and asked, "Excuse me, miss. But that's a very unusual combination. I write about beer, and I never heard that ordered before. Why did you order that?"
"Plain beer isn't sweet enough, and the Framboise makes it better."

Thus began a conversation which revealed Andrea Lynn to be quite as unusual as her beer choice. A TCNJ grad, she studied signing (she showed me some interesting various signs for beer), but her budding bar career seems to be getting first dibs on her life. After making her bartender bones at Chickie's and Pete's and tending bar at Park's Casino, she is a bar manager for a local athletic club. She is now "getting more heavily into beer" and is very involved in the Lower Bucks County beer scene.

She lives near Vault Brewing in Yardley, PA, and she has a special arrangement with Vault, allowing her to serve it exclusively in her club. She claims, "I'm in love with their Victoria's Secret IPA--and I hate IPA's." Lynn says their Sweet Potato Ale on Nitro is to die for, but getting it is not easy. "They can't make enough of their beer," she says. "It's so good, they run out of everything. I'm lucky they deliver just to me."

An ardent fan of TV's Bar Rescue and its star Jon Taffer, she claims that Taffer has been inspirational to her, and that watching the show has done much to help educate her in her own business--which is helping bars to get up and running. She purchased and uses Taffer's Pour System, and trains all her bartenders via that tool. Her dream job, she says, would be to become Taffer's personal assistant. Taffer's wife Nicole may have something to say about that, however.

I don't know if Taffer reads The PubScout's columns (if he doesn't
--he should), but with Andrea working (and worshipping) at his side, he might not yell as much.

Is This a Good Thing?

Cracking open a good craft brew is always a joy, but perhaps never more so than after completing a special task, assignment or Herculean feat, like, say, scaling Mt. Everest.

But just getting yourself up there is not an easy proposition, and carrying coolers (?) of beer for the celebration seems a bit cumbersome.

My buddy Larry, who agrees with the above, sent me this story, however, demanding that such a product be outlawed--or at the very least, eschewed by the beer cognoscenti.

Since you are part of the beer cognoscenti, what do you think?

Well, yes. At least according to this news story.
Maybe this is a drone program we can all support?

Cheers (and happy landings)!
The PubScout
Posted by Kurt Epps-The PubScout at 1:44 PM No comments:

I saw this note on Facebook from the hard-working and affable Steve Prince, the manager of the Ridge Tavern in Basking Ridge:

It is truly with a great deal of sadness that I bring you this news. Despite the tremendous amount of effort put forth by myself and my staff, we have not been able to achieve the sales levels that we had hoped for and projected. Ownership feels that a conceptual change is necessary and will begin renovations shortly with plans to open a more upscale dining establishment.

I wish to personally thank you for your support and I know that I speak for my staff as well when I say that it has been a pleasure to know and serve you.
Our last day of operation will be on or about August 15.
Steve

Sad to see this classic tavern change directions, but good luck to Steve, who tried like heck to make it a good beer destination with great food. Let's hope the good beer stays as part of the bar menu.
Posted by Kurt Epps-The PubScout at 1:47 PM No comments: