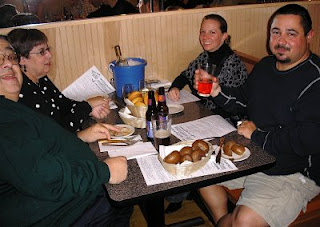 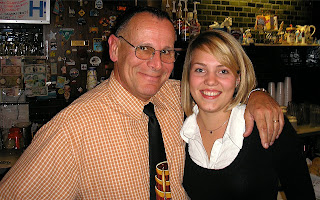 Dick's Dock, on Main St. in Metuchen, NJ, is not a big place by any stretch of the imagination. But it was certainly big enough to house a rollicking good time for the nearly seventy O-Festers who came to celebrate Prince Ludwig's marriage to Princess Therese.

Their spirits buoyed by Bob Dick's incomparable cuisine, a lineup of exceptional beers and an atmosphere ringing with the drinking songs of the Fatherland, the attendees ate, drank, sang and partied till nearly midnight.

As usual, the waitstaff hustled all night long to serve the Festers, and Sandy, Mary Ellen, Juan and Javier got a well-deserved round of applause for their efforts. Yours truly made some feeble attempts at humor and gave valuable life lessons--like how to say "brassiere" in Deutsch. Sorry, no free lessons on this site.

The festgoers were obviously satisfied, as these pictures will attest. One table not only celebrated a special birthday, it sported two REAL Germans in Reiner and Laura, an au pair with a future in a dirndl (see photo above). Festers were in fine fettle all night long, and they appreciated the giveaways that Bob and Sandy provided. In all, a most satisfying and enjoyable night was had by everyone fortunate enough to have a seat in the sold-out restaurant.

Oh, and Mike Sella took the opportunity to remind everyone that his restaurant will be hosting its own beer dinner on November 17. Call Uno's for reservations--732-548-7979.
Posted by Kurt Epps-The PubScout at 4:16 PM No comments:

The Star-Ledger's conservative columnist was in attendance at Basil T's in Toms River last week for the annual Oktoberfest celebration. Click below for his take on the evening. (Keep in mind that young folks haven't heard "old" jokes...)

If you run it right, they will come.

And come they did, to Basil T's in Toms River. The Gregorakis Brothers, both named Pete (due, no doubt, to some arcane Greek tradition called "momandouzo"), have managed to make this event better each year. So it should not be surprising that last year's count of 58 ballooned to 98, forcing the Petes to turn away fifteen folks and forcing the fun-loving guys in the Firehouse Polka Band to set up and play amid three tables full of O-Festers.

As they did last year, Beermeister Dave Hoffman and Chef Steve Farley crafted a beer and food extravaganza that had this year's attendees in awe. "The food this year was absolutely awesome," said Bob DePow , who has twice made the trek from his home in Perth Amboy. Some came from even farther away—like Branchburg—to participate in the revelry.

And revelry there was, including celebrating June's 65th birthday and the arrival of a first grandchild, courtesy of the Russell family. Andrew Russell entered the world at 6lbs., 8 oz. while his grandma and grandpa hoisted some Dunkel Weizen and ate Schwaibische Maultashen (a German ravioli with veal, vegetables and crisp onions). There were unconfirmed reports that, given the venue, the grandparents were lobbying for a German baby name.

There were even celebrities on hand this year, from Star Ledger columnist Paul Mulshine (which kind of looks and sounds like Maultashen after a few of Dave's Oktoberfests) and Gregg Hinlicky, beer artist extraordinaire. Jeff Linkous of The Beer Stained Letter blog was also on hand to enjoy his First Fest at Basil's.

The pairings of food and beer worked exceptionally well, from the Barnegat Light (which isn't light at all) and the Bavarian Shrimp, to the Pumpkin Porter and the Black Forest cake. The porter was malty, rich, toasty, and smooth. Colored a deep ruby/brown with the pumpkin notes gracefully understated, the Chocolate and Caramel malts in this 5.2% ABV delight worked well for those who don't like their pumpkin beer tasting like liquid pumpkin pie.

The Wurst course, with the most delectable weisswurst I've had so far this season, was accompanied by German mustards, gherkins and Dave's IPA.

The main course, heralded by the tapping of a traditional wooden keg of Dave's Oktoberfest, drew plaudits from every table, as the Pork Loin with beer sauce, potato pancakes and spaetzle was enhanced by Hoffman's classic Oktoberfest offering. There are some fine Oktoberfest beers in NJ this year, and Hoffman's always ranks exceptionally high for lovers of the style—like yours truly.

The oompah music, the singing of multiple "Ein Prosits," the fine food and beer and the general jollity of this very loud crowd (which is exactly what Oktoberfests are meant to be) all combined to produce a most festive occasion. The crowd was in such fine fettle that when door prizes were being picked and "Tina Fey" picked her own number, it erupted in cheers instead of "Fix! Fix!"

There are those who say Basil T's O-fest is the best in the state.

Surely no one at SRO-fest 08 would have disagreed.