In The Moshe Pit

Moshe Packs the House at Uno's

It was another large turnout for Moshe the Barman as he continues to display a growing expertise with the preparation and presentation of exceptional—some might say avant garde—cuisine.

Close to forty cerevisaphiles/gourmands packed Uno's back room for the tri-monthly confluence of Moshe's food, Mike Sella's grog and the madcap camaraderie that marks the event.

Next up was what Moshe called a once-in-a- lifetime Roasted Chestnut Soup, and it was paired with Troeg's Pale Ale, a perennial crowd favorite.

Ricotta-stuffed Seasonal Veggies were next and they were matched with the outstanding Sly-Fox Pils—from cans. A very creative and tasty salad with Beet Vinagrette was matched with Mike Sella's classic 32-Inning Ale.

Indeed, so plentiful was the food that first-time attendee, well-known Conservative Pundit Gene Hoyas was heard to say that if he ate any more, he would not have room for the Bronzed Pork Chop Entrée.

Which would have been a shame, bronzed to perfection it was, and having been paired with Old Brown Dog from Smuttynose Brewing. The selection was in honor of Ms. Nicole Batson-Chan, who has extensive experience with canines a la the Westminster Dog Show. She even determined the breed of the dog on the label of the beer without hesitation.

Dessert was a flourless—and exceptional--Chocolate Cake, which Moshe assured the crowd had absolutely NO calories, and it was joined in sin by Mike's Gust N' Gale Porter, much to the delight of Joe Skelly, on hand again after a brief hiatus.

Photos of the event are in my gallery on the top right of this page and are free to download.

Uno's next event will be a Cask Ale event on March 26th. Contact the restaurant for details.

Taking Beach Haus on the Road 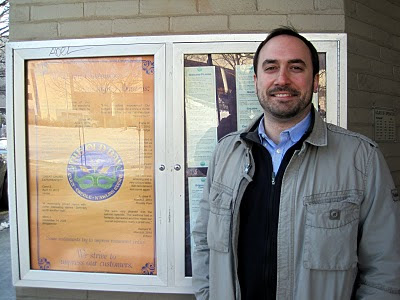 I met with Beach Haus Beer Rep Brian Ciriaco outside New Brunswick's storied Old Bay Restaurant a few weeks ago to pick up a test case of the Jersey Shore's Beach Haus Beer. My idea was to invite some folks to sample the beer before last night's beer dinner at Uno's to see how these beer nuts rated Beach Haus, which wants to be considered the Beer of The Jersey Shore. With Spring and Summer just around the corner, that's a smart and noble goal.

I took my handy-dandy Flip Video camera and recorded various beer lovers as they tasted and evaluated Beach Haus. Those videos will be available soon on Facebook on The PubScout's page. But in decidedly unscientific nutshell, the beer won over more than 95% of those who sampled it. Some called it a great "session" beer and others declared it would be their summer beer of choice—provided, that is, they can locate it here in Middlesex County. The brewing company's story, as well as places to find the beer, can be found on its website, and you can read about another successful blind taste test at my beer buddy Paul Mulshine's blog over at the Star Ledger. Beach Haus also has a Facebook presence.

There was only one taster who claimed he did not like the brew, and another claimed it was just "OK."

Check out the videos when they go up to hear the comments directly. So congrats to East Coast Beer Co. and Beach Haus, and thanks to Brian Ciriaco for the test case.

The Mardi Gras-themed Trap Rock beer dinner is set to let the good times roll. The Trap Rock restaurant is known for its superb food and beer, as well as its "Country Manor" ambience. Go here to see the menu and other details. There's even some video that I shot at last year's event.
Laissez les bons temps rouler !
Posted by Kurt Epps-The PubScout at 5:08 AM No comments:

This actually explains a lot...

Next you'll tell me NYC wants to ban smoking outdoors, including on beaches... (Just kidding...THAT would never happen. Would it?)

Have you ever tasted Harry Baals?

Harry Baals was the former mayor who was much loved and earned great respect among the Fort Waynians (?). They wanted to name the city center after him, but some government wonks decided that The Harry Baals Civic Center might not have the appeal of, say, The Fort Wayne Civic Center, so they overruled the populace who voted 10-1 to put Harry Baals' name on the place.

I think the guy's name is pronounced "Bales" not "Balls" so the city fathers' fear may not even be valid.

More importantly, there's an Irish Stout named after him, and it's pretty good according to Beer Advocate. If you'd drink Harry Baals Stout, why wouldn't you enter the Harry Baals center?

In any event, I'm raising a pint to Harry Baals.
You do what you think is right.

Here's a Stimulus Plan worth supporting...

Wait. No it's not. In fact it's just the opposite. Our friends at River Horse brewing have some weighty issues to deal with as a result of all this global warming we've received this winter. Let's hope the structural analysis allows them to keep brewing!  Good luck, guys!

Trap Rock Mardi Gras Beer DinnerMarch 8th, 2011
The next beer dinner at the Trap Rock has been set! It will take place on Fat Tuesday (March 8, 2011) starting at 6:30PM. The dinner will, naturally, have a Mardi Gras theme.
The guest brewery will be Ommegang from Cooperstown, NY, specializing in Belgian-style ales, described as "functional art, crafted to make your dining and drinking experience something to behold." Here is a sample of the ales that Ommegang is known for:
Hennepin Farmhouse Saison
Rare Vos Amber Ale
Ommegang Abby Ale
Three Philosophers Quadrupel
Ommegang Witte Ale
As usual, Chef Andy will be putting together an outstanding menu after sampling the ales that Ommegang will be bringing, designed to complement the flavor profiles of each of the beers to be served. The final menu and the number of seats available will be posted HERE when they become available. You might want to bookmark this link to keep in touch with the latest news about the dinner.
The price is $75 per person, including tax and gratuity. Please note, we will need a credit card number to hold your spot. Call the Trap Rock at (908) 665-1755, or come in to the bar so that we can add you to the list.
As usual, seating will be limited, so please make your reservations as soon as possible to ensure a seat at the table.
Bon Ton Roulet!

Thanks and a hat tip to MSU student and budding beer expert Julian Vidal who sends this to The PubScout on Super Bowl Sunday. Good Job, Jules! Now, how about doing some research on states that have great beer and absolutely NO snow...gets harder, doesn't it?