After at least three cask events as Uno’s Brewer, Zach Conner has the whole Cask Beer Fest thing down to a science.
“My first one was definitely more work in terms of acquiring and setting up the beers. That part’s easy now, thanks to all my contacts in the beer business.”

I arrived early to acquire a seat, set up my own beers and schmooze with my contacts behind the bar, so I chatted with Zach as he was tapping the iced-down kegs in preparation for what he hoped would be continuous throngs of beer nuts.

“The only thing I don’t know is how many will come or how long they will stay.”
In an attempt to encourage longer stays, Uno’s was providing live band entertainment from 3-5 PM. I didn’t stay to hear them, but I had a good excuse—helping my youngest son with a college assignment. And I didn’t want to be too many sheets to the wind, considering what I’m paying for his opportunity to graduate and go jobless for a couple of years.

Still, that looming task didn’t prevent us from stopping in, nailing down some half-priced Buffalo Chicken Quesadillas and sampling some of the ten beers on hand from six different breweries.

Firkins were provided by Uno’s, Kane, Carton, Forgotten Boardwalk, Harvest Moon and Bolero Snort. I first sampled Uno’s Coconut Brown from the hand pump, and it paired superbly with my quesadillas. Then it was on to Coffee Cake from the hot-and-getting-hotter Forgotten Boardwalk Brewing folks from Cherry Hill. A very unique beer that could actually substitute for dessert—or breakfast. Kidney buddy Seth Dolled happened in and took a picture with Beer Nut Natalie Lay (advertising in a conspicuous place) and me.

Then it was time for a delicious Harvest Moon’s Irish Coffee Stout (conditioned with vanilla beans and Jameson soaked oak. And, still in a stout kind of mood, I had my son Cody get me a Bolero Snort Lucky Bomb—delicious, but at just 4.4% not destructive of the thinking process I’d need later to help with the assignment.

I heard rave reviews from bar-mates, like Hailey’s Harp owner Chris Flynn, about Carton’s Hoppun, and Carton of Milk Stout is one of The PubScout’s regular faves.

As I always say, you meet a lot of nice folks at beer events, and this time it was a delightful lass named Amy Dundee with whom I chatted about beer and our mutual hometown roots.

It’s 7 PM as I write (“my” college assignment dutifully completed), and for all I know, the event may still be in full swing. I hope so. And so does Zach Conner. But if you missed this event, which was pretty crowded at 2 PM, you lost—not him.

In The Wayback Machine: Jake and Jocco's Riverside Inn

What with the Riverside Inn having received rave reviews in NJ.com's Best Bar Contest, I thought I'd share my review--from almost 17 Years ago! I'm glad to see the rest of NJ is finally giving this place the respect it so richly deserves. 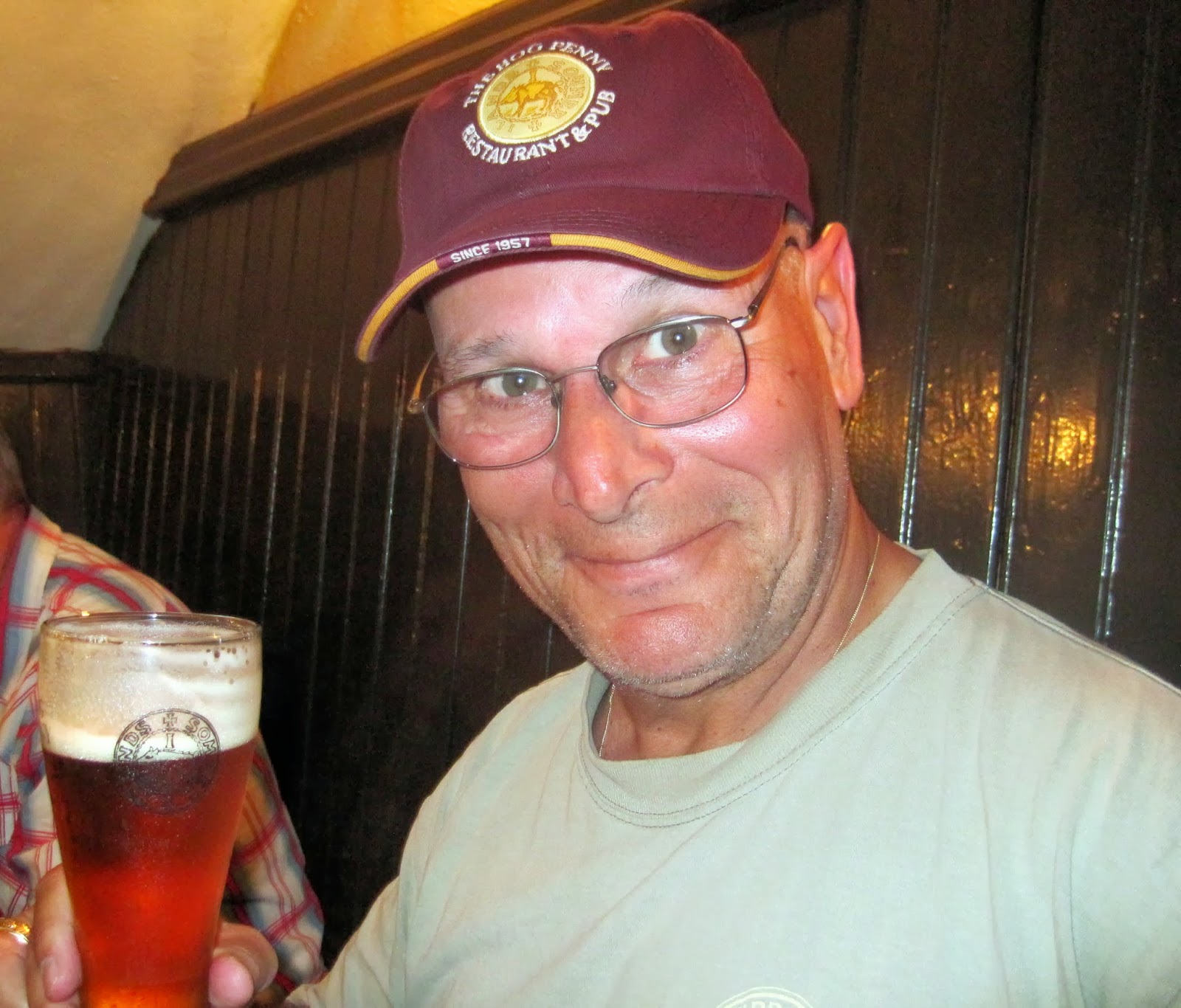 Books and Covers                                                     July 1, 1998
Cranford, NJ is not a big place, but it must have a beer karma. Within a one quarter mile area there are three outstanding places to get quality beers.
One is the famous Antone’s Pub on South Ave [now the fabulous Kilkenny House], visited and approved by no less an authority than Michael Jackson himself. Another, two blocks away and also on South Ave., is The Office, part of a chain of six upscale beer bars. And the third, Jake and Jocco’s Riverside Inn on North Ave., you might pass right by if you’re big on external appearances.
Too bad, because the place is a gem. This tiny local bar with a decor that wavers between Nautical, Bavarian and New York Yankees is a throwback to another era and has been a fixture in Cranford for decades. A former Model A Ford dealership, the joint is situated hard by the Rahway River at a spot that used to be a fording place for the Lenni Lenape Indians who resided there. Its kitchen is so small you’ll brush the walls if you blink your eyes. And if co-owner Jake (who’s big enough to have his own zip code) is in it, it’s a wonder any food comes out at all.
But the real wonder is  the food that comes out the door. It’s unusual for the PubScout to begin a review by talking about a pub’s vittles, but that’s what you’ll be talking about after you visit. The food is a factor of Big Jake’s (real name: Pete Jacobs) attitude toward his place, his customers and his work. “I just wanna cook, man. I wanna feed the world for five bucks a head, then go fishin’.”
And he’s pretty true to his word. The PubScout fed a family of five far more than we could eat, with outstanding appetizers and entrees (including Jake’s World Famous, Fight-Through-Storms-To-Get-It Crab and Cheese Crock) and multiple servings of drinks (at least three Boddington’s pints--on TAP!) for $46. The food was nothing short of sensational in portions and quality.
“I got whatever you want. If I can’t make it, I’ll run across the street and get it,” says the burly Yankee fan who keeps a fishing pole behind the bar for youngsters who may want to try their luck in the “mighty” Rahway River. He makes a daily trek to select his own vegetables, not trusting the quality of delivery services.
He also prefers to deal with beer salesmen who have access to Yankee tickets and who “understand his system.” Said system includes ten taps with a decent selection of micros that always includes an IPA, something light, something dark and some standard “canoe beers” (Bud-Miller-Coors) owing probably to Jake’s proximity to the waterside.
The micros available this night, a small but solid selection by anybody’s standards, were a measure of Jake’s experience in the business. On tap were Widmer’s Hefeweizen, Guinness, Bass, Harp, Sierra Nevada, Dundee’s Honey Brown, Beck’s  and--incredibly--Boddington’s. Not many places can boast a Boddy on tap, and it must have been nitrogen infused because it came with the classic bottom-filling creamy head and it was cold and delicious.
Though brother Jocco (Jeff Jacobs) was off this night, the place has a definite family air to it. Mama Jacobs makes all the salads, Jocco makes “all the stuff you can’t pronounce” and Jake makes the rest. Though neither brother ever planned to open a bar as a career goal, that’s where they are. “This is the place you come to before and after you go to the clubs,” said Big Jake, cutting food with a huge butcher knife as he spoke and alternately gesturing at me with it. “Both softball teams usually come here after their games. There’s always somebody you know here,” said the knife-waver who puts real Tootsie pops on every kid’s plate. Long time patron Paul Baruch (whose father was a patron) and his stunning blonde companion, Arizonan Victoria Lambert confirmed Jake’s assessment.
The PubScout’s better half, not a super-dedicated beer geek, bases her evaluation of beer bars on pubgrub. “I can’t believe that quality and variety of food came from one guy out of a kitchen that size,” she declared. “I’d come back here in a minute.”
So would the PubScout.
Just for the Boddington’s.