Being related to the 3rd President (in a rather arcane way), I have high regard for his abilities as a homebrewer. Yards' Ales of the Revolution Series features his Tavern Ale, and it's excellent. But this--this is something totally different. Can't wait for my buddy Dan Ratti to score me some of these. And after enough of them, I might just share the story of how I'm related to the man who authored the Declaration of Independence.Of course, that means you're buying...

The Best Beach Haus on the Jersey Shore...

...isn't where Snooki, Sitch and the gang make their weekly attempts to drag American culture even lower than it is. And now that the oft-maligned, zany, madcap guidos and guidettes from Jersey Shore are planning to shoot Season 4 in Italy (!) of all places, folks might think there's no longer a good reason to hit the shore anymore.

I drank one this afternoon, and it's called (appropriately) Beach Haus. It's billed as a classic American Pilsner--the kind that was around before Prohibition. While The PubScout can't attest to that claim, not having had the dubious experience of living during those halcyon days, I can tell you this: Beach Haus is one helluva good beer. Loaded with All -American flavor, a beautiful golden color, a wonderful balance of Mt. Hood hops and malt complexity, this beer may soon be the icon of the Jersey shore. You know a beer is good when its nose doesn't lie about its taste, and this nose is superb. Very smooth and clean on the palate and presenting a solid finish, Beach Haus will go with just about anything but Snooki Cookies or Ronnie's Mass-murdered Turkey Burgers. And it will hold its own all by itself as a session beer, especially on a hot summer day, whether you're at The Aztec, The Beachcomber or Bamboo.

John Merklin and Brian Ciriaco are the power guys behind this bold adventure, and Tom Przyborowski, a former student of mine and a heckuva homebrewer, works the malt magic as the brewer. Mesmerized by a magical zymurgical moment in Vermont, Brian recalled, "I can remember where I was when I had my first Long Trail Ale. The memory and the beer are synonymous to me now." Brian wants to replicate that feeling for others here in Jersey with Beach Haus.

I wanted to see if what I had heard about this beer was true, so I contacted Brian Ciriaco and met him near the Old Bay in New Brunswick ( a beer mecca in its own right) to pick up a case, as it's not yet available in many places north of Manasquan. In a hurry, but friendly and cordial, the youthful Brian gave me some samples that I will share with a select group of cerevisaphiles before an upcoming beer dinner event. I will record their evaluations and reactions on both paper and video, and I will share those results here and on Facebook. While I will supervise the tasting, I will not be part of the tasting team.

That's why I had to try some BEFORE the tasting session. You know, just to make sure it was OK for my beer buds to have, you see. I wouldn't want them to sample something I didn't think was up to their standards. So sacrificing myself (once again) for my craft, I popped the top of a Beach Haus and made a Swiss Cheese, Turkey, Mayo and Dill Pickle "sangwich" (as Pauly D says). Delicious! So now I will always remember where I was when I had my first Beach Haus--in my Haus.

As mentioned, this baby will go as well with fowl, seafood and salads as it will with JWoww. The PubScout wouldn't advise drinking it with any of the other, um, "ladies." First, you wouldn't want them in your Haus. Second, Snooki would be "in the bag" already, Deena would try to jump your bones and you'd probably want to smack Sammi with the bottle. Which, though it might wake her up some, would be a waste.

You can read the Beach Haus story for yourself on the website if you can prove you're eighteen. Too bad MTV didn't hook up with the Beach Haus boys--or vice-versa- to make this a staple in the Jersey Shore Guido Villa. What a branding score that would have been.

But don't you make that mistake. Summer is a comin' (though Jersey folks might be forgiven if you don't believe in summer anymore) and no beach house should be without Beach Haus.

In fact, no house should.

Cheers!
Posted by Kurt Epps-The PubScout at 6:53 PM No comments:

Stop by for a Qwiki

I volunteered recently to become an Alpha tester for a new website called Qwiki. The principle is like Google on Steroids, as whatever search term you input delivers a full audio-visual media background on the subject, complete with links to related stuff. the pictures are great and the information, as far as I can tell from my experience, is accurate and interesting. That it is apparently delivered by the same gal who tells me where to go from my GPS doesn't bother me at all. (She gets around, though, this GPS gal.)

But each day, the site sends me some new subject to explore, and guess what today's subject is?

Want to be a tester? Just go to the site and sign up. It's free.

Cheers, and happy researching!
Posted by Kurt Epps-The PubScout at 8:28 AM No comments:

The Man on the Flying Mouflan 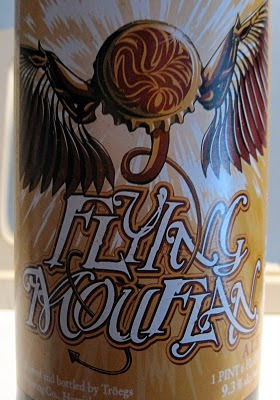 Opted for the Flying Fish Grand Cru Winter reserve the night of my last blogpost, and a great choice it was. But last night, with temps heading toward the teens and even single digits, and tired after a long day at the mats, I popped open a Flying Mouflan from Troeg's.

Not for beginners, especially if you never heard the term "barleywine." The Flying Mouflan is, however, not your ordinary barleywine. But I recommend it for any cold winter's night. Gorgeous caramel-red color, sweetish nose, redolent with malt. First taste will remind you it's a 9.3% big guy, but this complex beer finishes with exceptional balance.

I used an Allagash tulip glass (refilled once) to empty the 22 oz. bomber. Oh, and one more thing. This "over-the-cliff" beer is most wisely drunk at home or at a friend's where you can stay over. Excellent beer that I will try again, and they say it improves with age. That's what they say about us men, too, so I'm not sure I'm buying into that. Besides, winter ends in mid-March, so two months isn't making that much of a difference to me, and I'm sure not going to let it sit until next winter. Cheers!
Posted by Kurt Epps-The PubScout at 11:00 AM No comments: 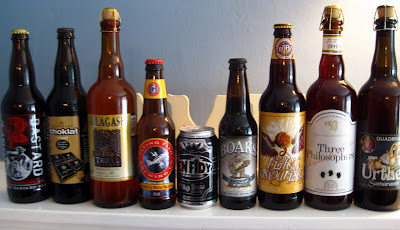 The frost may still be on your pumpkin, but you can chase it away at either of the upcoming beer dinners at local pubs and breweries. First up, Uno's Grill and Brewery in Metuchen near Menlo Park has set George Washington's birthday--2/22--as its next event. maybe in honor of the Father of our Country, we can acquire some GW Tavern Porter (Yards Ales of the revolution Series). The menu hasn't yet been drafted, but Moshe The Barman is being brought in to work his magic once again, so it should be outstanding. Reserve a spot for yourself and some friends now by calling Mike Sella and Co. at (732) 548-7979.

Speaking of Moshe the Barman, he's now plying his considerable crafts at Hailey's Harp and Pub, the cozy, friendly Irish pub at 400 Main St., also in Metuchen, near the train station. Hailey's is having a special beer dinner event on March 3. Irish Owner Chris Flynn, Italian Chef Johnny LaBarbera and Mensch Moshe are concocting a unique event you won't want to miss. Call 732-321-0777 to get info and make reservations.

Now back to business. Another round of "global warming" is set to hit us tonight, and there are weighty decisions of great moment to make.


A picture of all bottles is on top of column; individual bottle labels appear on photos link on the right side panel

Ah, the many difficult choices of a beer writer. Perhaps you'd care to make a suggestion to the PubScout from this list?

Going to the drugstore? Pick me up a growler...

In what is clearly a first, a Brooklyn Duane-Reade is putting a beer bar in a pharmacy. Talk about pain-killers....

A Duane Reade in Brooklyn With a Beer Bar - NYTimes.com