"This is the beer to end all beers."

Check out "The End of History," a beer with an unimaginable 55% ABV. But if you're planning on buying one, be prepared to shell out some gelt.

For the Boomer Generation, the town of Hoboken, NJ conjures up just two words, and one of them is "Frank." If I have to tell you the other, you ain't a Boomer. Hell, you may not even be an American.

But in the event you haven't been paying attention, Hoboken today is the place to be for Generation Everybody. Upscale, chic, bustling and close to the Big Apple sans the NYC prices, Hoboken is simply a hopping, happening place. Ol' Blue Eyes himself might never have imagined how his hometown could have evolved into what it is.

But it is something to see. Chock full of fine restaurants, beer bars, coffee shops and a host of boutiques and businesses, it's even billed as The Home of the Cake Boss, and the long lines to get into Carlo's Bakery on 1st and Washington Sts. testify to Hoboken Quality. Those lines, by the way, are equaled by the number of applicants for admission to the highly selective Stevens Institute of Technology, which makes its home atop Castle Point Terrace on Hudson in the heart of the city.

Ironically, it was a week-long stay at Stevens Wrestling camp for my RPS wrestlers that sparked my investigation of quality restaurants and beer bars in the city. While they were doing impossible Navy SEAL workouts under the auspices of Coach Mike "Maniac" Clayton, I was thinking about places to eat and drink good beer.

With my 26th anniversary approaching, I thought it might be a nice change of pace to bring the missus to the city—and a restaurant-- with the best view of The Big Apple, and my search yielded a gem in a place known simply as 3-Forty Grill. That happens to be its address on Frank Sinatra Way (hence the My-Way Highway), and if outstanding food expertly prepared and presented, superb service, some very good beers and eye-popping views are your bag, do yourself a favor and get there. Tell them The PubScout sent you.

Tammy, the assistant manager, was as pretty as she was affable and accommodating, and truth be told, the entire staff was both friendly and efficient. Our server Michael (himself a former wrestler for Don Bosco Prep) was an expert at pouring, and he filled my pilsner glass perfectly (three times, I confess) with the exceptional Brooklyn East India Pale Ale served at exactly the right temperature. My first sips, while looking out across the river at the building King Kong once climbed on, made me know I was in the right place at the right time—just before sundown.

The Brooklyn East India Pale Ale happened to be an exceptional match for 3-Forty's appetizer of Asian Style BBQ Gulf Shrimp—a portion large enough to have made it a stand-alone meal. Five perfectly cooked Jumbo Shrimp in a tantalizing Asian sauce made a wonderful introduction to what was to be a most memorable Hoboken meal. The missus, drinking wine this evening (hey, there's only so much I can do), had a Slow Roasted Beet and Crispy Warm Goat Cheese Salad. To say she raved about it is an understatement. In fact, she talked about it all the way home. She is still talking about it, and we've been home for an hour.

For my entrée, I chose the Asiago-Crusted Chicken Medallions (knowing full well they would pair perfectly with my BEIPA) and the presentation of this dish was only outdone by its taste. Thin-sliced, tender chicken, encrusted with an out-of-this-world Asiago coating, over a bed of orgasmic risotto, made this dish a winner. The missus had the Crab Cakes with the same risotto and had nothing but good things to say about it.

So full were we after the entrees, that we couldn't even entertain thoughts of dessert, and the dessert menu is fabulous. So we repaired to the Hoboken Waterfront—directly across the street-- with its spectacular views of NYC, where I waxed nostalgic over that exceptional meal with a fine, hand-made Alvarez cigar. As I soaked in the view, I quietly thanked 3-Forty owner Jerry Maher for setting up shop on the My-Way Highway. His outside seating areas are perfect for that early lunch or post-sunset meal. That's when the city lights come on. Even if you think you've seen the skyline before, it's magnificent.

Parking in Hoboken can be challenging to say the least—even on a Sunday night. But the Anniversary Gods smiled on us by providing a spot directly across from the restaurant. If they don't smile on you, you can park in the Littleman Garage around the corner on 3rd St. between River and Sinatra and have your ticket validated by 3-Forty which makes it an even better value.

There's something magical about viewing NYC from a short distance away, especially when the lights of the Empire State Building come on, and 3-Forty is the optimum spot for doing so. Couple that location with an outstanding meal, exceptional service and a chic ambience, and you'll know why 3-Forty is a prime spot in Hoboken.

We will definitely be visiting 3-Forty again. Maybe we should celebrate anniversaries more than once a year?

Not a bad idea at all. And maybe next time we'll save room for dessert.

Must be the heat and the pressure of the border disputes....From New Mexico comes this remarkable story of alcohol, "friends" and wagers and a condition I can only describe as "dumbassitis." Read below, but no laughing. 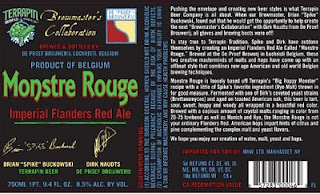 Monstre Rouge (Red Monster) is loosely based on Terrapin's Big Hoppy Monster with a Belgian twist. It is an Imperial Flanders Red Ale of 8.5%, fermented with brettanomyces and aged with toasted American oak. The malt profile includes a range of Crystal malts, Munich and Terrapin's signature Rye. It is hopped to 55 ibu's with a blend of American hops. It is a deep amber-red color capped by rocky off-white foam. It has a complex flavor profile - tart, sweet, sour, hoppy and woody. This limited production beer is available in cases of 6/750ml cork-finished bottles and 30L kegs. Suggested retail price is $15.99 per bottle

"I am very pleased to welcome Terrapin to the collaboration series," noted SBS Founder and President Alan Shapiro. "I believe Spike & Dirk have created something truly unique that will be enjoyed by discerning Belgian beer consumers."

"We consider it a great honor to be invited to partner on this beer," added Terrapin Co-Founder and Brewmaster Spike Buckowski. "It is a truly impressive list of brewers who have come before us and it has been a great experience to work with De Proef and SBS."

Each year SBS invites a noted brewer from different regions to co-design a beer and travel to Belgium to brew at De Proef. Monstre Rouge is the fourth beer in the De Proef Collaboration Series. Previous partners included Tomme Arthur of Port Brewing/Lost Abbey (2007); Jason Perkins of Allagash (2008); and John Mallet of Bell's (2009). The 2011 partner (from the Northwest) will be officially announced in September.

The beer will be launched and made available exclusively for two weeks prior to general distribution through The Rare Beer of the Month Club, the country’s most exclusive and prestigious beer club. “We’ve featured several past products from Alan’s collaboration series, and each has been an enormous hit with our very discerning customer base. Monstre Rouge embodies exactly what we’re going after in The Rare Beer Club, limited release, creative, outstanding craft beers.” http://www.beermonthclub.com/.

Highly regarded Belgian brewing engineer and professor, Dirk Naudts, founded the De Proefbrouwerij in 1996. He crafts each batch in an 11HL (9 U.S.barrel) brewhouse that blends state-of-the-art technology with traditional methods. Prior to creating DeProef, Naudts was the Brewmaster at Roman Brewery in Oudenaarde, Belgium and Brewmaster at the prestigious St. Lieven brewing program in Gent, Belgium.

Terrapin Beer company of Athens, GA was created by brewers Spike Buckowski and John Cochran in 2002. They are regarded as perhaps the most creative and adventurous brewer in their region. Terrapin beers are now available in
9 states. For more information visit: http://www.terrapinbeer.com/.

SBS Imports is based in Seattle, Washington and was founded by specialty beer industry veteran Alan Shapiro in 2002. In addition to De Proef, SBS also imports Aspall Cyders from Suffolk, England, Batemans Ales from Lincolnshire, England, and Bellegem's Bruin from the Bockor Brewery in West Flanders, Belgium. More information is available at http://www.sbs-imports.com/.
Posted by Kurt Epps-The PubScout at 1:11 PM No comments:

Metuchen is a great little town comprised of a great little shopping district and a classic small-town feel. The "Brainyboro," as it is sometimes called, is an oasis in an area of central jersey known for its shopping mall sprawl. Two items in the news call it to your attention.

The first is going to take place at one of my favorite NJ Irish pubs--Hailey's Harp and Pub on Main Street, and it comes straight from The Sporin himself..

Calling All Parrotheads (and anyone else looking for a good time!)

Friday, July 16th is Hailey's 1st official "Metuchenville" nite because its Five O’ clock somewhere! Join us for a selection of margaritas, Karma tequila (and Landshark specials, plus Chef Johnny’s unique creations, including, cheeseburgers in a paradise, a raw bar,
and finally Key Lime pie or nibble on sponge cake to end the night. Sounds of Buffett and giveaways will echo until Come Monday .

The other news, however, is not so good.

One of my favorite seafood places of all time--Dick's Dock, also on Main St.--has announced that its doors will be closing after thirteen years as a Brainyboro fixture. I haven't spoken with Bob (known as Bud to his patrons) or Sandy since the announcement was posted on their front window, so I can't share the reasons, if they're shareable.

In any event, Dick's Dock has been the scene of many a great meal and Beer Dinner and has sent countless numbers of diners and beerfesters out into the Metuchen night air fully sated from Bob's food and Sandy's hospitality. A BYO, Dick's Dock placed an emphasis on the freshness of its fare, especially its seafood, and Bob has a well-deserved reputation as being a wizard in the kitchen.

They will be missed for sure. Here's a pint raised to all the good folks--and good times-- at Dick's Dock. Good luck and Godspeed!
Posted by Kurt Epps-The PubScout at 5:06 AM No comments: