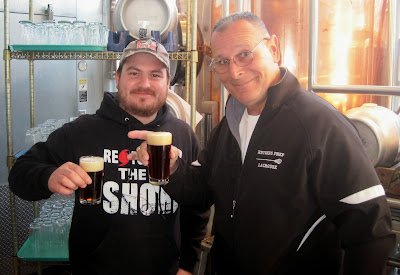 Uno's soon-to-be-former brewer, Chris Percello, put together a star-studded lineup of beers at his last Cask Fest, and Uno's soon-to-be-brewer Zak Conner was on hand to help--and take notes.

The fests at Uno's have drawn considerable attention from beer geeks and today was no exception. From far and wide they came to taste superlative brews, with representatives from Kane, Carton, Harvest Moon, Climax, Bolero Snort and Uno's itself.

Beer Goddess Megan Kennedy was on hand from the Shore area, and renowned Beer Writer Mark Haynie made the trek from near Cape May--portions of which are below the Mason-Dixon line.

Yours truly was on hand early, ostensibly to talk with the new brewer, but really to get a first taste of that much-talked-about beer from Bolero Snort--GingerBull Cookie Brown Ale--and it did not disappoint. Kane's Special Driftline Brown, made with Oak Nuggets (or some such thing) was also exceptional, and Carton's Wet Harvest, dry-hopped with Mosaic, also got plaudits from those who drank it. Of course, Dave Hoffman's outstanding Pumpkin was on tap at the bar, and it, too, saw a lot of action.


As Percello will be heading south to the nation's capital tomorrow to start his new gig at Right Proper brewing, it was a bittersweet event in some ways. Sweet because of the beer and people Percello's stint has affected, and bitter because of, well, the hops in Kane Ripple Session IPA and Climax IPA.
More pictures available here, and be sure to read the captions. Good Luck, Chris and Natalie!

And, just as importantly, good luck to Zak as he begins his new adventure. During our discussion, he allowed that his mission, aside from making the good beer Uno's has come to be known for, is to encourage more people to get under the good beer tent. "I'm excited," said the former Harvest Moon Assistant from Madison, NJ. "This is a great opportunity for me, and I can't wait to get started."

Conner indicated that he would love to see events like cask fests, blind tastings and beer dinners be regular occurrences at the Metuchen pub. Following in the footsteps of his predecessors, Mike Sella and Percello, he'll have big boots--and plenty of pint glasses-- to fill.