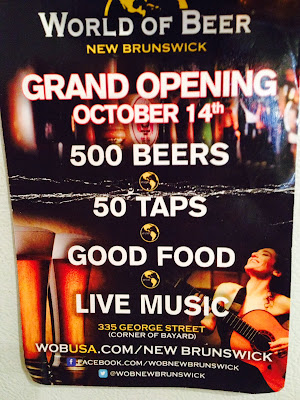 The PubScout, being totally and selflessly committed to informing his wide (and growing) readership of good beer opportunities, sojourned yesterday to New Brunswick to cover the Grand Opening of the new World of Beer facility there. Using this promo card as a guide, I reported here that October 14 would be G.O.D.--Grand Opening Day.

While the facility was "open," it was open only for what Manager Kelly Andre called "Beer School," a required staff tutorial on beer, its styles and the various nuances thereof. The real G.O.D. would be October 28th, he advised.

Which, in the grand scheme of things isn't so bad. Having your waitstaff properly briefed on beer, what it pairs with and what its characteristics are is a good thing, and certainly worth a two-week wait. It would avoid experiences like one I had when I once questioned a comely waitstaff wench in a pub which shall remain nameless. I asked her, "What's the difference between an ale and a lager." She responded with, "Um, lagers are dark and ales are light."
Such a response is not really the barmaid's fault; it is the fault of management. If you're going to sell good beer, make sure the staff--comely or not-- knows its stuff. Still, even among the unpacked boxes, those alluring, bright and shiny 50 taps on the wall beckoned The PubScout like The Sirens beckoned Odysseus. And while I was disappointed that I would not sample their nectar this day, I was not distraught. I will persevere. I will be there for the G.O.D.

In the course of our brief conversation, Andre revealed that he is opening a raft of WOBs around the tri-state area, including Princeton. (I privately mused that a Rutgers-Princeton rivalry might one day manifest itself in the form of competing beer dinners, but I digress.) 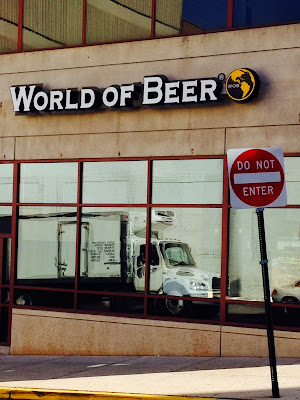 I will be putting that new waitstaff to the test on October 28th to see what they gleaned and retained from "Beer School," an educational institution where nobody cuts class.