...But it was still a rollicking good time!
Scaled down somewhat due to the lingering impact of Hurricane Sandy on local residents who usually attend, the festival was confined to one room rather than the two that usually are filled to capacity. But in some ways, the setting was actually more conducive to interaction among the guests, the emcee and the PolkaDelphia Oom-pah band that came from Philly for the event.

With Dave Hoffman doing the brewing and Chef Steve Farley churning out his usual succulent fare, the event was filled with Ein Prosits, mug-clanking, siggy-soggies and oy-oy oys.
The San Francisco Cable Car table, the Steve's Cousins Table and the Table of The Virgins were on hand to add to the festive atmosphere. 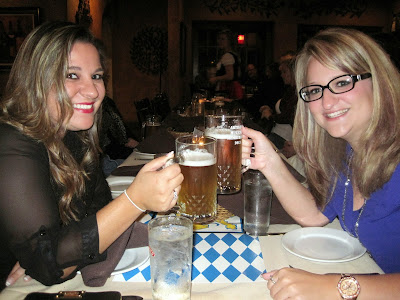 Other notables included Paul Mulshine of the Star Ledger, Chris Percello (soon to be former brewer at Uno's) and even Sandra Bullock put in an appearance. One wag commented that she came from Gravity into Depravity, but he was just joshing.

Actually the weather could have qualified as soggy--if not siggy--as torrential rain caused terrible road conditions, and a few tardies who had to navigate flooded roads to get to their Nirvana were accorded a warm welcome when they eventually arrived. Not counting the fester who yelled out, "Ayyy! Yo! Where the hell you been?"

It was especially good to see former Dirndl Beauty Margaret and manager Liz in the house, attending the event for the first time as guests.

In all, it was another successful Artisan's Oktoberfest Dinner at the House that The Petes built.
Even though one of them was at some other house.