Owner Jamie Queli and pal Seth Dolled of Forgotten Boardwalk Brewing in Cherry Hill are doing some wonderful things—and not all of them have to do with making really good beer. Take the Spice of Life Event they sponsored at the brewery this past Sunday, the second of its kind designed to increase awareness and participation in organ donor programs. 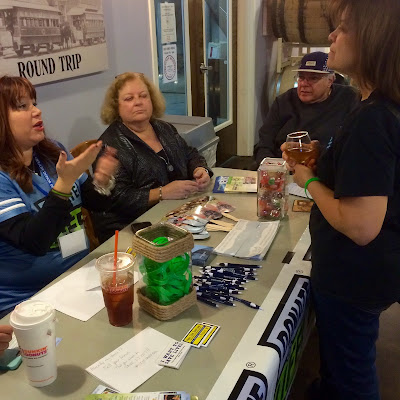 Featuring a host of their regular beers and two special brews from Brewer Dave Bronstein that showcased a variety of peppers, the owners saw their brewery packed with devotees of good beer and good causes. Jamie, the face of Forgotten Boardwalk Brewing, was not only proffering her beers, she was celebrating the tenth anniversary of a special Gift of Life. The main cause on this day was to encourage awareness about organ donation, a subject her brewery friend Seth Dolled knows a bit about. Dolled donated his own kidney ten years ago to save his mother’s life—and, because of his donation, his mom Sharon was there in full vigor to participate and promote.

Nor is Queli a stranger to charitable donations of other sorts, having held many food drives, a coat drive, donations to Sustainable Cherry Hill and to The Food Bank of South Jersey. She even regularly donates the profits of her two skeeball machines to the Pink Boots Society--except fro this day, when the proceeds go the Gift of Life and the Living Kidney Donor Network.

Forgotten Boardwalk donated a keg of their outstanding Shore Shiver to an event held in Foley’s Pub last year called Craft Beer for a Cause. The cause was to assist my own son Brett, who had recently been diagnosed with ESRD—End Stage Renal Disease. That he was “between insurances” when the disease struck necessitated the fund-raising efforts designed to help him until his work insurance kicked in, and Queli's charitable gesture was offered without a moment's hesitation. 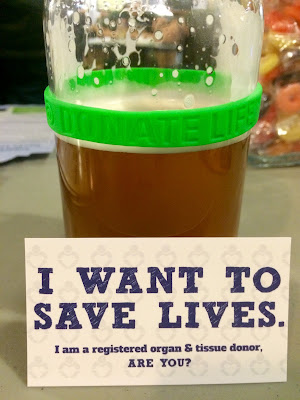 Therefore, the large turnout at the brewery to support Queli, Dolled and their cause was most uplifting, and the team will be making a sizable donation from the proceeds to the Living Kidney Donor Network. Twin sisters Mariah and Satyra (also a donor) staffed a table laden with information about organ donation, “Donate for Life” bracelets, information pieces and other items whose purpose was to spur those inclined to donate to do so, as well as to get those not yet so inclined to think about it.

But what about those special beers that headlined the event? The first was called Lady 8, which was a variant of the brewery’s “What the Butler Saw Wit.” Normally a watermelon refresher, this one had four different peppers provided by official “Pepperer” Bryan Glickman. Using Devil’s Tongue, Dragon Cayenne, Habanero and an even hotter Chocolate Habanero, Brewer Bronstein created a zesty brew with a relatively low ABV that was very drinkable and palate-pleasing. He used the same peppers and bumped up his “Pocket Trick Imperial IPA and dubbed it “Hot Trick,” but the result was a fascinating, thoroughly enjoyable 8.5% brew that was the choice of many in the room, including yours truly.

Of course, when the time came to grab one of the foot-long burritos from the World Wide Burrito Company Truck stationed outside, I switched gears to the Funnel Cake Nitro which would allow for more “gulpability” and less “sipability.” But after devouring the massive burrito, I switched right back to the “Hot Trick.” Even my spice-loving  missus (who claimed on the ride down that she would not likely drink any beer this day) found Hot Trick to be so thoroughly irresistible, that she sent her personal valet (me) back to the bar three times for refills.

Bryan Glickman gave the PubScout a quick course on peppers, and even provided the samples of his gardening efforts for all to see. Glickman shared that peppers are good to grow because no animals will eat them like they will other produce.
“What about bugs?” I asked him.
“Simple,” he said. “We installed a praying mantis nest in the garden. We don’t have bugs.” Talk about environmentally-friendly and sustainable…

“Hot Trick” was perfectly infused with the peppers—not so little as to be barely detectable, but neither so much as to set your forehead sweating and your hair on fire. As Brewer Dave said, “Making a beer so full of overly hot spices defeats the purpose of making beer with spices. At base, it has to be drinkable.” And it certainly was. I asked Dave how much spice he used for his batch of Hot Trick, and he allowed that for eight gallons he used less than one ounce of each spice. “Pepperman” Glickman added that he’s going to start growing an even hotter one with the name “Scorpion” in it. Stay tuned for the Scoville score on that baby.

The place was chock full of people, including some recognized luminaries of the beer world like beer journalist Kevin Trayner and Peripatetic Beer Taster Natalie Lay. At one point, there were no seats to be had, and the line at the bar was four deep. At another, two tables were left empty, but the line at the bar remained four deep. Wondering why, I went outside and found a host of beer and burrito folks basking and picnicking in the 57º sun. And, of course, the legendary skee-ball machines inside saw their share of action.

It’s very clear that the folks at Forgotten Boardwalk care about what they do in the brewery, and their beers are reaching more and more Jersey beer lovers thanks to Dolled’s marketing efforts. But charitable events like the Spice of Life also show that they care about people, too.

If that quality of caring gets more people to drink your product, that’s wonderful.

If it gets them to donate an organ to save someone’s life, it’s a win all the way around.

Did you know that ONE organ and tissue donor can save or enhance the lives of up to FIFTY other individuals?