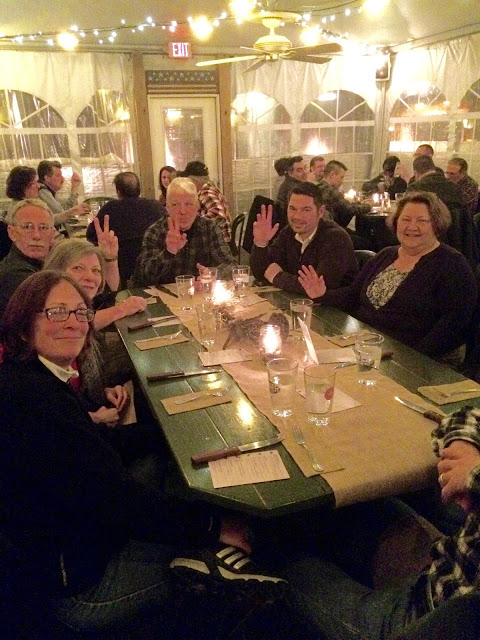 Staging a successful beer dinner, even for seasoned pros, requires many things to work together. The beer, the food pairings, staff efficiency, the venue, the host and even the crowd are all important cogs if the result is to be a beer dinner that runs like a well-oiled machine. To achieve that in your very first beer dinner, while presenting a food/beer event which is decidedly “outside the box,” is a testimony to the teamwork of the Stirling Hotel.


Tom and Dori Baldassarre, owners of The Stirling Hotel, gave the reigns over to Beer Manager Dan Schneider and his management team of John Baldassarre, Dan Moeri and Meghan Bury to run what was called a Colorado Craft Beer and Game Dinner. Along with his Exec Chef Ryan Chatfield and Sous Chef Brandon Campney (who proved their culinary wizardry), the team scored a huge win, at least if the reactions of the forty-plus guests were any indication. 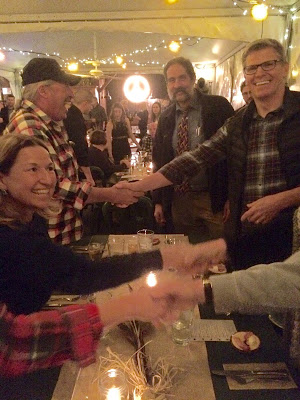 Set in the cozy confines of the outdoor heated patio, Schneider and Company delivered winner after winner in terms of beer and food pairings, some of which yours truly had never tasted. Wild Boar, Rabbit, Brook Trout and Elk are not The PubScout’s usual fare, even at some of the high-end places he has evaluated. Add Prickly Pear Granita and Crème Brulee—all with appropriate libations—and the table for success was indeed set. That such an elaborate offering was served with great efficiency is a credit to the staff, who also managed to clean up every setting after every course, silverware included, and replaced it with new settings.

In an unusual move, Schneider opted to pair the Wild Boar appetizer with Breckenridge Brewery’s 25th Anniversary Imperial Vanilla Porter aged in Barbados Rum Barrels. Beginning a dinner with a nine-percent monster was a gamble, but its smooth taste worked beautifully, and it was an immediate hit. After that course, the friendliness levels around every table skyrocketed predictably.

The Rabbit dish was paired with Oskar Blues’ excellent Pinner Throwback IPA, and it served as a mini-palate cleanser to prepare for the rare (in NJ, at least) Left Hand’s Sawtooth Nitro, which matched up with the crispy-skinned Brook Trout and Morel Mushrooms. Long a fan of Left Hand’s Milk Stout Nitro, the PubScout was so impressed with the Sawtooth that he requested a second glass.

That set the stage properly for the main event—Elk with Sage, Barley Risotto, Cumberland sauce and a flaming sprig of juniper. Tender, sweet and savory, the elk had everyone at my table “mmm-ing” in approval, and though I may not get it, I’m asking for the barley risotto recipe. That it was matched with Great Divide’s hearty Hibernation Ale didn’t hurt either.

I really need to watch “Chopped” more, according to the missus, because, as a meat and potatoes guy, I had no idea what Granita was…maybe a Spanish term of affection for a diminutive maternal grandparent? But I sure know what it is now: a term of affection for an excellent palate-cleansing dessert made with Prickly Pear Juice and Lime Zest. Along with Avery’s unique Liliko’i Kepolo, it would have made for a memorable end to a five-course meal.

Except this wasn’t a five-course meal—it was a six-course meal, maybe seven if you count the Welcoming Glass of Mama’s Little Yella Pils served with Serrano ham, Salame Feline and aged goat cheese with black truffles on a polished slab of pine tree stump.

And the last course was an exceptional Crème Brulee made with egg yolks from the chicken coop out back, and honey and lavender. Schneider made another “out of the box” move by pairing it with Redstone Meadery’s Sunshine Nectar Mead. The smart money says that that’s not been done often—if at all—at a beer dinner.  A cost of $65—including tax and tip—for a six-course dinner of this quality is, quite simply, a steal. And every guest walked away with a pint glass favor filled with tchotchkes as a remembrance of the night.

The Baldassarres, Schneider, the Chefs and the staff received a well-deserved round of applause for The Stirling Hotel’s very first venture into the beer dinner scene, and the gracious hosts invited The PubScout to visit when the weather is more conducive to outside events, which will showcase The Ponderosa I wrote about here.

I will take them up on that, and you might want to consider getting to their upcoming beer dinner to be held next month. It’s going to be a New England-themed dinner with appropriate beers and foods. I’ll publish more details when Dan Schneider sends them to me.

It will likely be another Stirling effort. 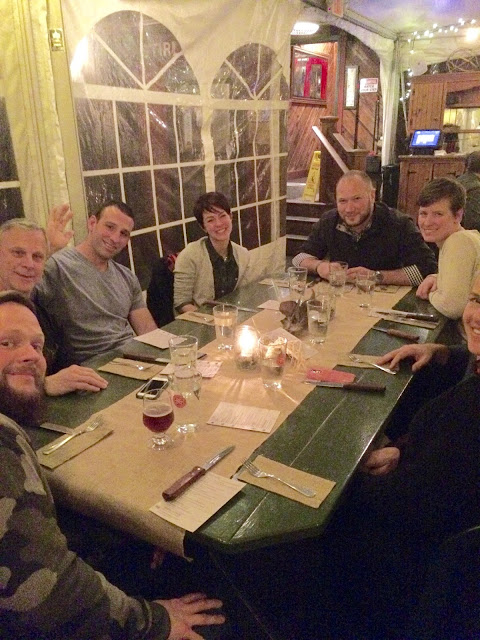