Like iron filings to a powerful magnet, faithful beer nuts lined up outside the now-famous Maloney’s Pub in Matawan in temps below 40º a half-hour before the 11 AM scheduled opening of what has become an annual tradition.

Well, the polite ones did, anyway, as there were a lot of boors—male and female-- who decided to get there just at 11 and cut the line, which could have made for some unpleasantries were it not for the sensible folks who made resolutions not to let rude mamalukes bother them in 2016.

But once inside this classic beer bar, which is much more spacious than it looks from the outside, the raw weather and the wait were quickly forgotten as patrons claimed seats at the bar and the tables. Sporting 125 taps with many hard-to-find, outstanding beers, Maloney’s has been running this event for five years, according to owner Meghan. It began when brewer Lost Abbey came on board and requested a launch on New Year’s Day. The idea appealed to husband and wife team Florin (a former Greco-Roman wrestler) and Meghan, and the couple has been running a full brunch beer-tasting for the past four years. 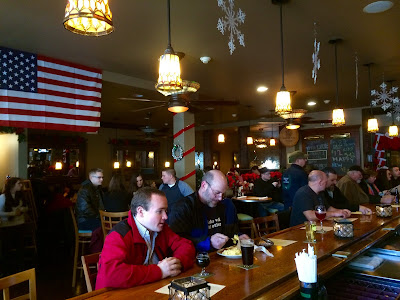 Apparently with great success, as Maloney’s was packed on this day. “ Our busiest day, St. Pat’s Day, is just a bit bigger than this event,” said Meghan. "But this one is always big." Maloney’s is also a family-friendly venue and Meghan allowed that they have, on occasion, had to go up to the attic to bring down more high chairs to accommodate the wee ones.

The brunch ($28) is apparently a very popular attraction, as the food lines snaked through the bar waiting for a shot at Maloney’s always-good food. Maloney’s organizes its beer list sensibly, and one can select from Ciders and Meads, Pumpkins, Belgians, German, Jersey Brews, Stouts and Such, IPA’s and Pale Ales, Wheats and Fruit Beer, Session Beer and “Other” Great Beer. Helpful, short descriptions accompany all of them.
But today’s PubScout Tasting Team, somewhat depleted due to excessive New Year’s Eve revelry, eschewed the food in favor of the beer, and they had quite an array from which to choose.

Cody, a fan of Jersey beers, enjoyed
Carton 077XX and Kane Head High, following those with the tart and unusual Avery’s Liliko’l Kepolo, which, in Hawaiian, means “Cut in front of me and I’ll tase you, bro.”

Wes went with an Allagash White and a Firestone Walker Union Jack.

But we all sampled--and raved over--Aecht Schlenkerla Oak Smoke, a doppelbock using beech and oak-smoked malts. It's barman Roger's favorite beer. Smooth and perfectly balanced, it will be our first choice when we return to Maloney’s, which is as renowned for its clean taps and lines as it is for its beers.

Hopefully, that will be very soon with a fully reconstituted PubScout Tasting Team.


And on a day when we don’t have to Liliko’l Kepolo (use our tasers) to contend with line cutters.