The first microbrewery in Bergen County—Brix City Brewing-- has hit the ground running. Owners and high school buddies Joe Delcalzo and Pete Reuther, like many now in the Jersey beer business, got their start as homebrewers. Working with a beermaking kit, they produced their first beer—a robust porter—and according to Pete, their first beer was a big hit among their circle of friends.
“We thought it was pretty good, and when we took it to a party, everybody else did, too,” said the US Army veteran.
Considering that everybody at the party was feeling no pain at night’s end, Reuther and Delcalzo figured they had a winner.

Change that to winners, as the duo, along with Brewer Sean Foley, are cranking out close to seventy barrels a month in a variety of styles. 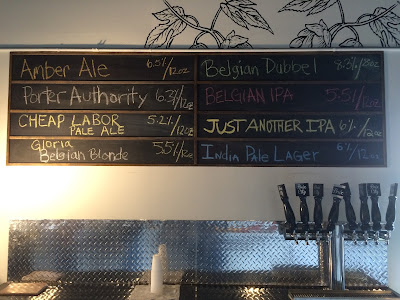 Their “Porter Authority,” probably an homage to their first beer, is an outstanding example of the style, and was the first one Delcalzo offered The PubScout on a recent visit to their Little Ferry operation. Along with Gloria Belgian Blonde and Cheap Labor, a hoppy pale ale, the smooth Porter is part of the year-round lineup.

Five IPA’s—one for every taste-- also can be found in the rotating beers: Brews Willis (an American IPA), Just Another Double IPA (an Imperial IPA hopped with Citra) and its little brother Just Another IPA are three of them. Kill The King (KTK) is another Imperial IPA coming in at 8.7% ABV, and it’s joined by Chuck Bowman, a Black IPA hopped with Simcoe. On the day of our visit, The PubScout Tasting Team (The PTT) was offered a very tasty Belgian IPA as well.
A delicious and beautiful-to-behold Belgian Dubbel, a Belgian Tripel (unsampled) and a Czech Pilsner called Jaromir Lager (also unsampled) round out the rotation.

Seasonal offerings include St. Stephen, a saison, Brix City Marzen and a 9.5% Imperial R.I.P. Stout. Derek Wheater is a an American Wheat beer hopped with Sorachi Ace.
The team is also enamored of sour beers, and is considering setting aside at least one tank as a “Brett” tank.

The PubScout Tasting Team was impressed with most of the offerings, and Pete and Joe even brought out some “green” beers to sample.
Such a repertoire must keep Brewer Foley, a Rutgers Prep alum, pretty busy. But, as a former wrestler, he’s totally up to the task, even if he has to take occasional advantage of a suspended hammock in the brewhouse on occasion.

“Everybody here is busting their butts,” said Pete. “But we are on a mission to produce good, flavorful, bold beers. And we know that someday our hard work will pay big dividends.”

In many ways, the operation—and the name-- is itself an homage to Newark’s legendary brewing roots, and the entire back wall is a huge map of The Brick City in 1895, delineating with large numbered dots where most, if not all, of its famous breweries of yesteryear set up shop. The map is the handiwork of Pete’s dad, Doug. So impressive and nostalgic is it that The PubScout suggested they produce smaller, take-home handouts to give to those who visit the tasting room. They’d make a nice keepsake. As would bottles in the shape of bricks....

Tastefully appointed, and bearing more of Doug’s artwork, Delcalzo and Reuther built much of the interior by hand, including a long bar which beckons the beer drinker to belly up. There’s even a Graffitti Cooler you can sign with a Sharpie in case you want to let future visitors know you were here.

In addition to those beers mentioned above, upcoming offerings will include 1064 City Bock (sampled, and very tasty), Brix Barleywine and Silk City Stout.

Delcalzo and Reuther are planning to distribute their beers to more local pubs and restaurants, too. Currently, they can be found in forty-four establishments, and some of those places are among the “heaviest hitters” in Jersey when it comes to beer. You can see the list and locations here.
Just about a forty-five minute ride up the NJ Turnpike from Central Jersey, Brix City Brewing is well worth the visit, and if the owners’ plans for expansion come to fruition, there will be a Biergarten outside for fair-weather quaffing very soon. No food is available, however, but you can certainly bring your own munchies.

The next time The PubScout Tasting Team hits "The Brix," that’s exactly what we’ll do.
If you want to join the Team, send a request to pubscout@comcast.net 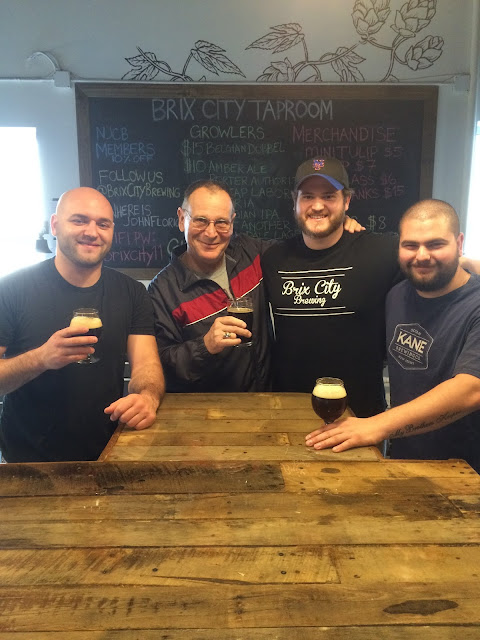