In what has become a tradition at the end of the District 12 wrestling tournament, I usually meet up with the South Plainfield coaches to re-hash the great moments while we re-fill our pint glasses. Given their team’s success on the mat (32 consecutive district titles and a recent State Group III Championship), they have every reason to hoist a few.

Me? I don’t need a reason beyond the act of hoisting and enjoying.

But we decided to convene this year’s session at the Garden State Ale House (nee George Street Ale House) in New Brunswick this past Saturday. As fate would have it, NJCB’s Mike Kivowitz and Company were warming everyone’s cockles with some excellent beers at a Winter Cask Fest a half-block from GSAH. And they were aided and abetted by the beer staff at the venerable Harvest Moon.

The wrestling/beer session was set for 8 PM, but the cask fest was from 2 PM till 11 PM—or till the casks kicked. So my son Cody (a former wrestler himself) and I headed to the Hub City around 5:30 PM.

Parking in the Church St. deck, we walked the short distance to the Moon and found the place as packed as the parking deck. SubScout Natalie Lay (who may attend more beer events than I do) had been there since the opening with her friend Pooja and her husband Dave. She said the capacity really hadn’t changed much since the 2 PM opening.

It wasn’t hard to see why. Kivowitz and Moon brewer Kyle McDonald had an array of Jersey beers that acted like a magnet to Garden State beer geeks:

With four-ounce or eight-ounce pours available, quaffers could sample a nice variety of good Jersey stuff—some of which are not always available. For example, the Carton Don’t Panic is not easily obtained outside the brewery and is always on cask.

With more quaffing set for later in the evening, yours truly had to pace himself while relying on son Cody to serve as a surrogate taster, a role which he has been taught to relish since he was a Great Dane Puppy.

First up for me was Bolero Snort’s Bravehorn Scotch Ale, and, truth be told, it was so good, I would have been happy if that were the only cask there. But it wasn’t.
Harvest Moon’s Luna DIPA and Kane’s Head High were also extraordinary, as was Tom Zuber's Gluttony from Demented. Spellbound’s Maple Peppered-Bacon Coffee Porter was as tasty as it was unique. Gretchen Schmidhausler’s Duck Boy Pale Ale (Little Dog) was what we’ve come to expect from NJ’s first GABF Gold Medal-winning Biermistress, and Oceanus was hazelnut-flavored chocolate milk with coffee in a glass—adored by some attendees, but too sweet for others according to my totally random and unscientific poll. Personally, I liked it. I also enjoyed the regular menu Hoppy Monkey that Dave Czapka recommended. 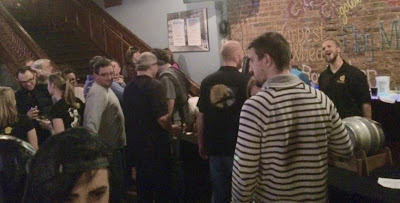 Only two of the offerings exceeded 8% ABV, and Demented Tom’s Gluttony was one, prompting the affable brewer to complain that even HE couldn’t get a full pint of the stuff. (Well, maybe not here. But back at the brewery in Middlesex, I doubt that’s the case.)

Anyway, Cody and I had more drinking to do up the block, and we wanted to put some food in our bellies first. We walked for 30 seconds up to the Garden Street Ale House and, because this place was hopping, too, grabbed two seats at the almost-full bar. Matt, a most knowledgeable and convivial barman, brought us some menus after handing us a very extensive beer menu and dutifully asking what we wanted to drink. Normally, I’d have ordered a beer immediately, but I wanted to have a look at the food menu first.

I asked Matt what he thought was good (and what would go well with a Founder’s Azacca IPA), and he pointed to a Chicken Caprese sandwich and an Ale House burger. Cody got the former and I, the latter. Matt’s beer/food recommendation was dead on. The Chicken sandwich was both large and delicious according to Cody, who got a second Azacca to help wash it down. My large burger was also perfectly done, and I had a Forgotten Boardwalk Morro Castle for dessert. I wanted to speak with manager James Zabib to learn more about the place, but he was busier than a one-armed paper hanger. I’ll have to return for a chat and a few beers. It’s a tough job, I know….

The South Plainfield Crew showed up and jumped on the Azacca (except for one guy who only does Jack and Coke), and they loved it. I even had a spare four-ounce pour ticket from The Moon that I gave as a congratulatory present to the head coach.

But I doubt he was able to use it, because I learned that almost every cask at The Moon kicked by 8 PM, and the Tiger coaches were probably not done celebrating by then.

What with the Region Wrestling Tournaments coming up this weekend, we’ll likely have to find a celebratory spot, and either of these places would work.

Or depending upon the outcome, we could celebrate at both.