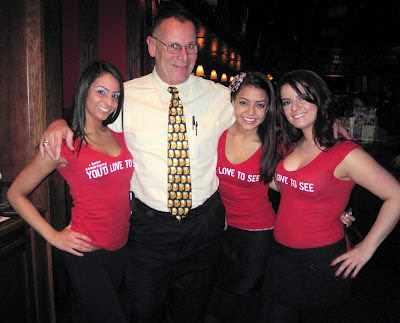 Preparing for just his second beer dinner ( after a most successful debut ), Michael Scofield has provided the PubScout with a beer dinner menu that few beer and food lovers can resist. Scofield, bar manager by day, but master chef by beer dinner night, has enlisted the aid The PubScout and one of the PubScout's favorite breweries--Ommegang--to complement his food. For those unfamiliar with this beer or its products, it's a remarkable operation in Cooperstown, NY that focuses on doing things the Belgian way. Built in 1997 on a former hop farm, the brewery will serve at least four award-winning beers at The Fox and Hound  in Edison on June 18.

Course 3--Caramelized Onions and Garlic with Cavatelli
Succulent sweet onions, browned to perfection, mixed with zucchini halves and minced garlic, atop a tender
bed of cavatelli, drizzled with balsamic vinegar and garnished with thyme--paired with Ommegang Rare Vos

Course 4--Chicken with Prosciutto and Sage, Sauteed Spinach with Golden Raisins
Juicy chicken cutlets layered with sage leaves and thin slices of savory prosciutto prepared in white wine and
olive oil, served with a side of trimmed spinach sauteed with golden raisins--paired with Hennepin Farmhouse Ale

Now if the beer is served the Belgian Way--in approriate glassware--this could really be a night to remember.
Contact the pub for reservations and details.