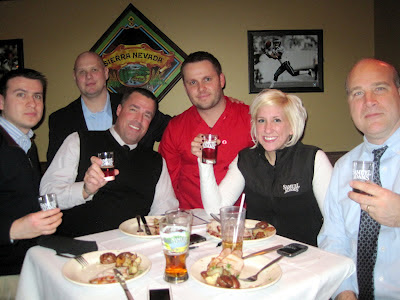 There is a big difference between having a beer with dinner and having a Beer Dinner. While the former can be delightful with the right choices, it is usually more mundane than special, and far less social. The latter is—and has to be-- a special occasion. The sly folks at the Fox and Hound near Menlo Park Mall, launching its inaugural beer dinner voyage, seem to know this.

Descriptions—in color—of all the beers served awaited guests at their tables, as did professionally printed menus with beer selections included. The seating arrangement was designed—smartly—to enhance the convivial aspect of the evening. It seemed clear to The PubScout that management knows what’s needed to spark interest in a pub as a welcoming place, especially in pubs that offer a variety of good beer along with normal pub-grub.

Manager Mike Scofield, who did all the cooking for the Fox and Hound’s First-Ever Beer Dinner, made sure that the menu was a special one, not just the normal fare one can get any day at this spacious and comfortable pub. Normally, Mike is the general manager, and does none of the regular cooking, though he allowed that cooking is his passion. Judging by the comments of the crowd of thirty that gave this experiment a try, he should be given more access to the kitchen. The crowd, by the way, was the largest crowd ever for a beer dinner launch in the central Jersey area—at least in The PubScout’s extensive experience. And all with whom I spoke were impressed—impressed enough to promise a return to the next one in three months.

A good third of the crowd were good-beer-and-food devotees from neighboring establishments that have hosted special beer dinners. The F&H used its social media connections like FaceBook , Twitter and an email blast to alert customers to the event. That kind of corporate cooperation is critical to both launching and maintaining a credible--and creditable--beer and food operation.

Scofield, a reader of The PubScout’s blog, was coming back from a session with his F&H District Manager Mike Simpson, when he suggested that the company begin doing beer dinners. To Scofield’s surprise, Simpson said that the company was about to begin doing just that. The green light was on.

While Scofield clearly knew his way around the scullery, he was smart enough to seek professional help on the beer side by enlisting the aid of Rachel McAdams, an upward-bound distributing exec with star-quality looks, to provide the Sam Adams beer and the ancillary goodies that make beer dinners special—like hats, key-chains and quality glasses the guest can take home. Jim Koch would have been proud of her as she advised the crowd to “romance” their beer, rather than just slug it back, as the “Guys from Brooklyn” wanted to do—at first.

A rousing game of Presidential trivia, in honor of President’s day got the NJ Devil’s table two free tickets to the next beer dinner, tentatively set for each quarter, thanks to the ingenuity of Erick Bollinger, a bar manager in training who served effectively as maitre d’ the entire event. The waitstaff of Ashley, Leesha and Erica were friendly and efficient in serving the food, and they became expert beer pourers as well.

For a first attempt, the Fox and Hound has much to be proud of, and Scofield’s creative wheels are already turning with themes of future dinners. Given the plethora of good beer that lies waiting in his taps, future dinners could see a very nice variety of combinations. With the promise of corporate cooperation, as well as a solid quarterly commitment to regularly scheduled beer dinners, the future looks bright indeed. While the recipe for success is not difficult, implementing it properly is, and the Fox and Hound has done that admirably.

Check out the pictures at right. Click on any picture in the Photostream or on View My Gallery, then Fox and Hound Dinner 1.