Two-For-Two at The Fox and Hound 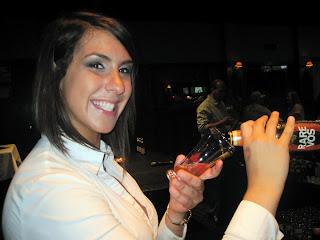 Any ball player who gets a hit every time up during a game is widely praised and celebrated with headlines. That’s because hitting a small baseball approaching you at 90 mph with a rounded surface like a bat  is considered the most difficult act in sports.
Beer dinners are pretty demanding in terms of coordination, too Why should the host of a Beer Dinner—who’s currently batting 1.000--  get any less recognition?

This is the second time Fox and Hound bar Manager
Michael Scofield has gone into the kitchen, donned his chef’s hat and stepped up to the plate(s). 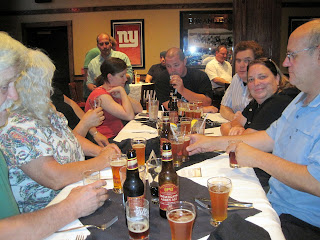 Partnering with Ommegang Brewery, Scofield and crew put out some fabulous fare with some very solid beer pairings to make his second at-bat another hit.
Attended by forty, up from twenty-five last time, this dinner showed why Ommegang has been so successful since 1997, and why Scofield may require more area for the next dinner. You can see the menu here, and Scofield even added an extra beer to the mix—the original Ommegang Abbey Double—to tide the guests over through a very minor entrée delay. That’s in perfect keeping with the Fox and Hound tradition of customer satisfaction, and will probably account for a larger guest list next time around.

Scofield’s serving staff, comprised of Sarah, Nicole and Erica, did yeoman’s work throughout the night. It was most heartening to see so many younger folks (most of them comely lasses) there trying and learning about good beer. And it’s always good to see old friends. 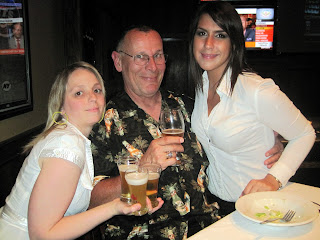 As always, there were varying opinions about which beer or which pairing was best, and that’s as it should be. In the beer world, you like what you like. But I was very impressed with the Cavatelli and Rare Vos combo. But in The PubScout’s view, you can’t go wrong with anything from Ommegang—especially when the Three Philosophers are in the house.
The only current question is can Scofield go three-for-three? We’ll keep you posted when his next at-bat occurs.
You can check out the pics of the event here, or click on the Gallery to your right.
Posted by Kurt Epps-The PubScout at 6:43 AM