Working Overtime at The Office

Some years ago (like, maybe ten), I did a story and an interview with John Augustine, who was the go-to Beer guy in The Office Restaurant chain hierarchy. He was primarily responsible for guiding The Office restaurants into the burgeoning world of craft beer. (That story, entitled From Bouncer to Boardroom, won me a writing award, by the way.)

I don't know what's become of John, but I can tell you that The Office chain is still promoting craft beer--and much more. 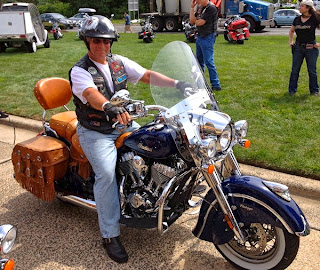 After a motorcycle ride last month (on the 2014 Indian Chief), my biker pal George and I decided to stop into the Office in Bridgewater on Rt. 22 for a burger and a brew, where we met Manager Greg Santoro. When I identified myself as The PubScout, we began to chat about all things craft beer, and I discovered that Greg is totally tuned in to the scene. Immersed, in fact.

You want proof? He recently sent me a nice, follow-up note, which follows, and which deserves some attention from beer nuts. Check this out:

I am reaching out to you to invite you to one if not all of the events we are currently having here at the Office. We have so much going on over the next few months, here's the break down. Starting today we are celebrating Oktoberfest in a big way. We have a whole menu dedicated to Oktoberfest food and beer. Everything from Potato Pancakes to Shnitzel, Brats and German Potato Salad. We are also featuring some Marzen beers such as Spaten, Sam Adams and Brooklyn.
Soon to be tapped we have Paulaner Oktober, Riverhorse Hippolantern and Hacker-Pschorr Oktoberfest.

In the spirit of Oktoberfest Sam Adams is having a stein hoisting [competition] here at our location on Thursday September 26th from 5-7 PM with lots of give aways and of course the coveted chance to win a trip to Germany for Oktoberfest, courtesy of Sam Adams. Of course only one person in the country is selected each year based on who can hold the stein the longest.


On top of that, all throughout the months of September and October we will be doing a promotion called #CLANKING. Sponsored by the Sam Adams beer company, it's a contest solely based on friends clanking mugs of beers together, taking a picture of the act of clanking either in store or off premises and posting it to our face book page under the name #CLANKING. Prizes include a 3 day trip to Boston and a tour of the Boston Brewery. The other grand prize winner will win $1500 cash. It's all about who takes the most unique and inspiring photos clanking mugs to promote good beer, good friends and good times. 18 to enter and win 21 to be shown clanking with alcohol, details found at locations or our website.

From now until February we are featuring a NFL game day menu that features our HUGE fresh never frozen wings and home made sauces, soft pretzels, buffalo pizza and much more plus great prices on beers any time there is a NFL game on. We always have sports on one of our 10 flat screens, and show every game all week long.

Last but not least I wanted to send you a list of our current draft list in hopes that we can get some love from you guys to try and drive people out to have a great time at the Office of Bridgewater.

We also have a great selection of bottled beer as well including Ayinger, Chimay Victory and many many more. Please feel free to contact me any time. Any love and support we can get from you and your team/community would be welcomed and greatly appreciated. We extend invitations to our upcoming events to you and your crew and followers. 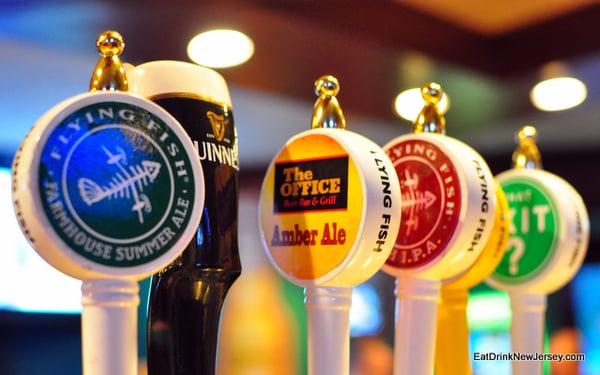 Sounds to me like The Office in Bridgewater under the supervision of Mr. Santoro has "got it going on."

So head out there, and say hello to Greg. Tell him The PubScout sent you.