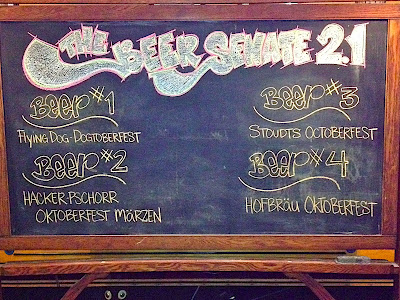 The momentous question regarding Syria was not broached at all.
Two intentions, however, were actually dealt with:
Moshe Atzbi's beer selections and food offerings at this Oktoberfest-themed senatorial session.

As per usual, Moshe's culinary preparations were the subject of raves, especially from the two newest Senators--Kaz and Alex-- sitting at my table. A multi-sausage dish with succulent red cabbage, some absolutely heavenly German-style wings and a huge, buttery pretzel accompanied by three orgasmic sauces sated the Senators' appetites, while Moshe's beer choices slaked their thirsts.

Also as usual, Moshe & Co. had some surprises in store, including  a giveaway of tickets to RU's game this Saturday and a generous helping of Moshe's special stash of Southern Tier's outstanding Pumking. Veteran Senator Natalie Lay won the tix, and in a remarkable display of Senatorial Courtesy, awarded them to the two rookies at the table.


The session was also informed about the well-known history of Oktoberfest and the little-known history of Moshe's German Uncle Klaus and Chris Flynn's brief
--but memorable--stint as a paratrooper.

The next senate Session (on the 2nd Tuesday of October) will discuss the merits of Belgian Dubbels and Tripels.

Regarding the beer contest, Stoudt's Oktoberfest won the evening, but an important issue did arise that perhaps one of you well-informed readers can answer. It was noted on the side of the Hacker-Pschorr bottle that the liquid inside is called an ale. Paulaner (not at the session) says the same thing. Marzens are traditionally lagers--especially in Die Faderland. And while some excellent marzens have been made using ale formulas, it was surprising to more than one Senator to see that info on the bottle.
We shall investigate. Calling Dave Hoffman!