What does your beer say about your politics? 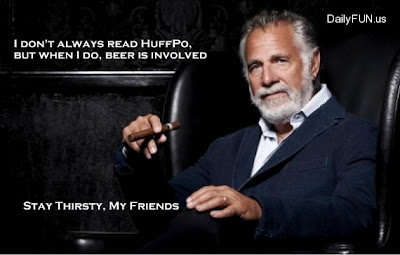 I assiduously avoid making political commentary here. This is after all, a beer blog, not a political one. And I don't even tell political jokes here. I've seen too many of them actually get elected.
I will, on occasion, discuss political figures and their relationship to beer, as you may have read during the heightened interest in the current homebrewery product at the White House. My beer-buddy (and political opposite) and artist Gregg Hinlicky has supposedly saved me a White House Honey Ale he brewed using the recipe from 1600 Pennsylvania Ave., and I have asked other local brewers to try to make it as well. As soon as I can put some on my palate, I'll report.
In the meantime, another beer-buddy, Dave Bruneyko (and political brother-in-arms), sent me this link which attempts to assign a political position based upon the beer you drink. I can't vouch for its general accuracy, but then again, the general political polls we see daily have their shortcomings as well. And I'm a big fan of the only poll that really matters--the one held on election day.
The link implies that somehow Dos Equis drinkers are the most politically moderate, while Heinie drinkers align with Dems and Sam Adams guys gravitate toward the Republicans.
In any event, enjoy the findings and see where you supposedly stand, remembering that if you don't practice moderation, you might not be standing for anything--for long.
Cheers!
The PubScout
Posted by Kurt Epps-The PubScout at 5:54 AM

it's waiting in the fridge for you, my friend
-Gregg

it's in the fridge waiting for you, my friend
-Gregg