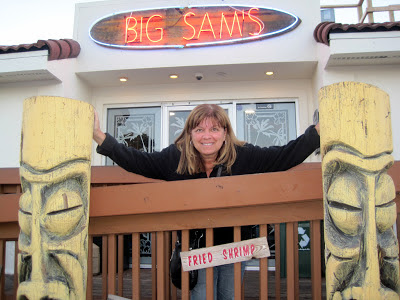 Back in April 0f 2010, I discovered a seafood/raw bar gem in Virginia Beach misnamed Big Sam’s. It’s misnamed because it’s anything but big, though its owner sure is. Back then, I wrote:

“Stepping into the place did nothing to dispel my original assessment. Four foot flames licked out from a galley on the right as two cooks dodged the fiery tongues and did their best to manage the meals. A quick look about as the waitress led us to our corner table revealed that Big Sam’s was anything but. Still, it sat right on the water of the marina and the menu looked about as down home as you could get. The more I looked about, the more I felt a baseball-hatted George Clooney and his fishing crew from the ill-fated Andrea Gale might be having some beers at the next table. It wasn’t the fanciest of places, for sure. The best places rarely are fancy. But there was a definite charm about it that made it feel like a haven from life’s storms.

Finding myself back in VB after a vacation in NC, I knew I had to bring the missus to Sam’s. An October Thursday night saw a ten-minute wait, so you can imagine the craziness that, Brooke, our waitress, said the summer season brings. 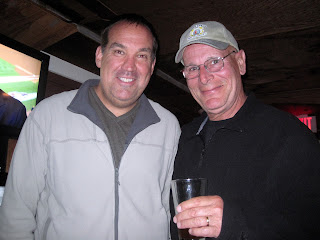 Big Sam himself ambled over to our table and we made our introductions. Sam allowed that when he first started the business, he was enamoured of craft beers, but eventually got away from it “a little bit.” Apparently, his regulars appreciated good beer more than he anticipated, and slowly but surely he re-introduced the good stuff. I had a  Pumpkin Ale from Alewerks  that was simply outstanding (rated a 94 by BA), and it went perfectly with Sam’s signature Hatteras Clam Chowder. Of that broth, I wrote in 2010:
,”…quite possibly the best chowder of any variety I have ever had anywhere. Clear broth, chock full of delectable, tender clams and peppery to the palate, it might be worth a six-hour return trip just for that combo.”
I was happy to find that the soup is just as good as it always was, and its intricate, yet hearty, flavors worked to bring out the spices in the pumpkin ale. Brooke brought out a platter of Buffalo Shrimp, so I had another Pumpkin Ale, and it, too matched up perfectly. Big Sam does all the beer ordering, and he’s very comfortably back in the groove. With a very decent standard beer list, Big Sam also offers excellent selections on a rotating basis. When he bought the business, his goal was to open a friendly place where folks could get a good meal, good service, good conversation and a cold beer. He now is actively replacing the adjective “cold”  with “good.” 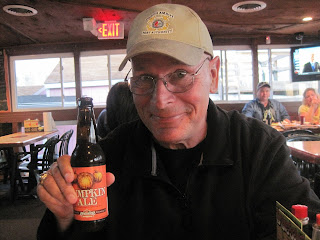 But Sam’s doesn’t pack them in just because of his beer selection. His food is the attraction, and it should be. It’s well prepared (by a trained culinary school chef), served by pleasant, efficient staff and reasonably priced. The missus loved her Shrimp Tacos, though they were accompanied by a souped-up Bloody Mary and not a beer.

Don’t let the Tiki gods out front or inside intimidate you. They’re relics from his surfer days and his marriage to his wife Dawn in Bora Bora. They are welcoming you to a good time, good food and good beer in a neat place you should not miss if you’re in Virginia Beach. Even if you have to wait awhile.