They’re not called “bennies” in NC?

A recent trip with the missus to NC’s Carolina Beach put The PubScout in close proximity to a favorite pub-of-the-past, The Front Street Brewery in Wilmington. I reviewed this pub more than a decade ago, after traveling round trip through the USMC base at Camp LeJeune on a weirdly foggy summer night that had me looking for Rod Serling “at that signpost up ahead.” A follow-up review, sans fog, was long overdue. Two visits in ten years will not qualify me as a “benny,” even by the harsh standards of my beer buddy Paul Mulshine. I would, however, be considered a “tourist,” in the more genteel tradition of the South.

Kevin Kozak, FSB’s brewer for the past six years, was not brewing during the last visit, but, brother, is he brewing now. With a plethora of interesting beers on the menu, and being the beneficiary of some very encouraging state laws, Kozak generates 1300 bbl per year from his ten-barrel system. The former Green Terror (McDaniel-nee-Western Maryland) graduate got his start in brewing cleaning out the tanks of others at places like Cap Cities in Shirlington and Arlington, and made his bones at places like Old Dominion. Originally considering a law career, he gave up parleying for barleying, and he’s never looked back since. “There are days when it’s surely work,” says Kozak, “but there isn’t anything else I’d rather be doing.” The quality of his beers attests to that. 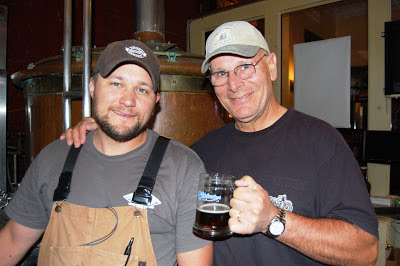 An early riser, he gets to the brewery around 6 AM and begins his duties. Along with Assistant Brewer Christopher McGarvey, the beers that keep Front Street Brewery hopping in both summer and winter, flow regularly. Kevin’s Scottish Ale, a malty 8%, true-to-style classic is by far the best seller—summer and winter. “We’re a summer town for sure,” says Kozak, “and the locals kind of go into hibernation when the visitors [NC’s polite version of Jersey’s “bennies”] are around. But our regulars re-emerge when the tourists leave, and they keep us hopping all winter.” He does concede that January and February are a bit on the slow side sometimes, but overall the pub is doing well.

That may be because Kozak and assistant McGarvey are seizing opportunities to educate more and more folks about the pleasures of beer. McGarvey, a devout Orthodox Christian seminary student, decided to teach his own church congregation how to homebrew. Kozak expanded on the idea and invited other congregations to join in the fun. With a program titled “What Would Jesus Brew?” (He-Brew, The Chosen Beer being taken), the two held sessions on the second floor of this deceptively-large building (which can actually host wedding-type events for 100 people) to a very interested audience. It was a smart move, considering that early colonial settlers usually made a church their first building, and a tavern their second.

As are many brewers, Kozak is also environmentally aware, saving his spent grains for a local farmer who was walking in with his dolly as I was walking out with mine. Speaking of the missus, she raved about Kozak’s Coastal Kolsch, which I considered a major victory in the battle to wean her away from, first, Bud, then Blue Moon. The PubScout enjoyed Kevin’s Oktoberfest—served in its own special mug, for just $10 for fill and mug. I also sampled the Haka Pale (excellent), the Scottish Ale (equally so) and the 9% Baltic Porter aged in bourbon barrels (kick-ass). His beer was fresh, well made and very true-to style, yet some of his beers also ventured into the experimental area, like the American-hopped Belgian Tripel called “Absurdity.” Kozak also does daily brewery tours from 3-5.

While “Historic Wilmington” has no dearth of eateries and pubs, many I passed on busy Front Street had hawkers on the sidewalk enticing passersby to come in and sample their fare, with one guy dressed as a beer barrel. Front Street Brewery, on the other hand, was passing out those square buzzing lightpads that lets the holder know when a table’s ready. That should tell you something. Though the PubScout did not get a chance to sample FSB’s food on this visit, its reputation surely deserves a return visit.

The pub opens at 11:30 AM, and FSB does not take reservations, so forewarned is forearmed.