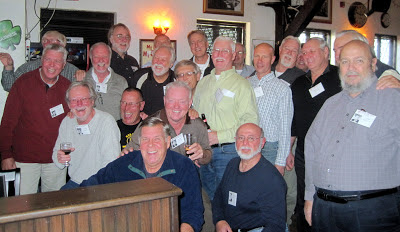 The year was 1968. A lot of serious, crazy stuff was happening in the US. But the college guys I ran with were pretty much oblivious to it, preferring to focus on more important issues.
Like going to Tierney’s Tavern on Valley Rd. in Montclair.

A group of us Montclair State students (of drinking age, of course) would convene regularly at this classic Irish pub to suck down a brew or two, gorge on the delicious cheeseburgers, talk sports, ogle girls and engage in what we considered high philosophical debate. (I once proved that we don’t exist because “now” is too infinitesimal to measure. It’s amazing how smart college students think they are after a few beers.)
But outside of our apartments, Tierney’s was the place that the song from Cheers talked about, where everybody knows your name. Mine was Old Eem. 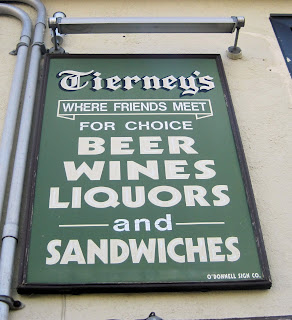 Fast forward forty-four years. My alma mater has changed considerably since I trod its footpaths. My college changed its name from MSC to MSU and its mascot from a noble, proud and revered American Indian to some bird, a politically correct act for which I have never forgiven it. And the dorms are co-ed! What’s up with that? I got kicked out of mine for wrapping a comely, willing lass up in a rug and transporting her to my boudoir to see my itchings etchings. And now it’s officially approved by the college? Just shows how forward-thinking I was.

The tab to attend is also a tad larger than I remember, too. I know this because two of my progeny are attending MSU as I write; hence I have no money.

Fortunately, some things never change. Like Tierney’s Tavern, or the flag therein which says: Ireland—United—Gaelic—and Free. Things were not much different in Tierney’s in 2012 than they were in 1968. Same buff colored walls done in ersatz wattle and daub, same huge American flag dominating the back wall, same hustle and bustle near the kitchen door, same long hardwood tables and chairs for twelve on either side.

The HD TV’s positioned in key locations around the walls were a far cry from the mounted TV I remember over the bar that had only six channels—and dials on it that you had to actually get up to change. “Clickers” hadn’t been invented yet. 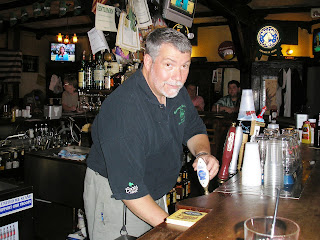 Also interesting is that Tierney’s offers far better beers than those generally proffered in my heyday (you know which beers I’m talking about)—not that any in my circle gave a damn back then.

TJ, the burly, friendly and welcoming bartender (another thing about Tierney’s that has remained constant) is part of the ancient Tierney clan that has run this iconic pub since 1934. He had 10 taps running, and many of the beers were worthy of a beer geek’s attention, like the Saranac Pale Ale, which was perfectly poured. I asked TJ if I could snap his mug shot, and he said, “Absolutely no problem. The Sopranos shot an episode here in Tierney’s and I was in it, serving beer, of course.”

Four-plus  decades ago, when we’d leave Tierney’s, it was a foregone conclusion that we’d return. Today we did, as brothers of the Gamma Delta Chi “Singing” Fraternity, and although MSU was holding its own Homecoming events on campus, the brothers of Gamma Delta Chi held theirs within the semi-sacred confines of Tierney’s.

Attended by more than twenty brothers from classes as far back as the early sixties, this meetup, organized entirely by “Easy” Don Naylor and MSU’s Joseph Morytko, saw friendships that had lain dormant for more than forty years spring immediately to life when eyes locked. Also springing to life were the stories that accompanied those days, and we laughed just as hard as we did when they actually happened. “Papering” someone’s dorm room, shooting water—and once, incredibly, lighter fluid—under somebody’s door, marching outdoors naked—inexplicably-- whistling the Colonel Bogey March as a police cruiser pulled up—these and more brought us back to the days of a carefree, relatively benign college existence in a world which was still relatively in order and our hair was not only more abundant, it hadn’t turned the color of cotton. Our teeth, like our personalities and lives, were pretty much all our own.

Who would have thought we’d be here at Tierney’s Tavern almost five decades later sharing pictures of our children and grandchildren? Not us. We couldn’t envision parenthood, much less grandparenthood. And definitely not geezerhood. But thanks to “Easy” Don who printed out the words in VERY BIG LETTERS for us, we belted out the good old fraternity drinking songs with a vigor that prompted the non-brothers in the bar to applaud quite loudly when we were finished. That it might have been because we were finished didn’t register with us.

Still, for four hours in the friendly confines of Tierney’s we bonded (again), cracked jokes, told stories, drank and ate freely—just as we did when the term “back in the day” wasn’t even a legitimate term. We never realized that those days would be our heydays, and that someday we would willingly—and damned accurately--recount them to our fraternity brothers, re-living them as though they had just happened.

Forty-four years is a long time, and many things changed for all of us. Some changes were unpleasant, like losing brothers who were far too young; and others were life-changing in a positive way. What did not change—and likely never will-- was the spirit of camaraderie we shared as college students, our senses of humor and the lasting friendships we made.

One other thing didn’t change. Tierney’s.
And we wouldn’t have wanted it any other way.

You can check out the pics here.

Kurt,
You were our Gamma Composer back in the day and today you became our "painter". Your words captured the essence of the day and the bond that developed over 40 years ago. This brotherhood has survived the miles and years that have separated us, and today we have come back to experience it again.

The Blue and the Gold, it's men will grow old, but cherish it all through the years!