It's two-wheel time again, and the Bucks County area calls me frequently. I usually eschew the touristy New Hope and Lambertville spots using Yogi Berra's classic line:
"Nobody goes there anymore--it's too crowded."

If I'm not heading to Stockton, Frenchtown, Milford or Riegelsville up north, I usually hit Titusville, Newtown and other spots further south. You can read about Jersey's Patriot's Crossing in Titusville here, and you can learn about a young lady named Andrea Lynn who I met in Isaac Newton's in Newtown here.

At the Washington Crossing Brewfest last week, I met Frank Lyons who owns the 150 year-old Continental Tavern in Yardley, and he invited me down for a chat. So after crossing the river at Washington's Crossing today, I hung a left on PA 32 and headed for Yardley.

As fate would have it, Frank was off premises, as was his beer man Ross, but a bevy of beautiful beers served by pleasant female servers were definitely in the house. The tavern itself has a Revolutionary ambience throughout, so much so that you just "know" Revolutionary stuff went down here, even though it was restored to the way it looked in 1877. And I didn't even get to see the secret "Underground Tunnel" in the kitchen.

My bar server Vickie testified that it was indeed there, though. But she did show me a list of beers that had to amount to at least 150  bottles, not counting what was on tap. Those beers were topnotch and varied: Rogue Dead Guy, RJ Rockers Peachy King (9%), Bell's Oberon, Stella, Hoegaarden, Guinness, Deschutes Black Butte, Laughing Dog Sneaky Pete Imperial IPA (10%), Left Hand Milk Stout, Anchor Liberty Ale andYuengling. (Hey, it's Pennsy.) I had come a few days too late to try the Troeg's Scratch Series Session IPA out of a firkin at the bar.

As I was enjoying that stout, I recalled that Andrea Lynn from the story above said she lived near Vault Brewing in Yardley, so I asked Vickie where it was.

"Two buildings down," she offered.

So I paid my tab and ambled out, walking the 100 feet to what looked like a bank. 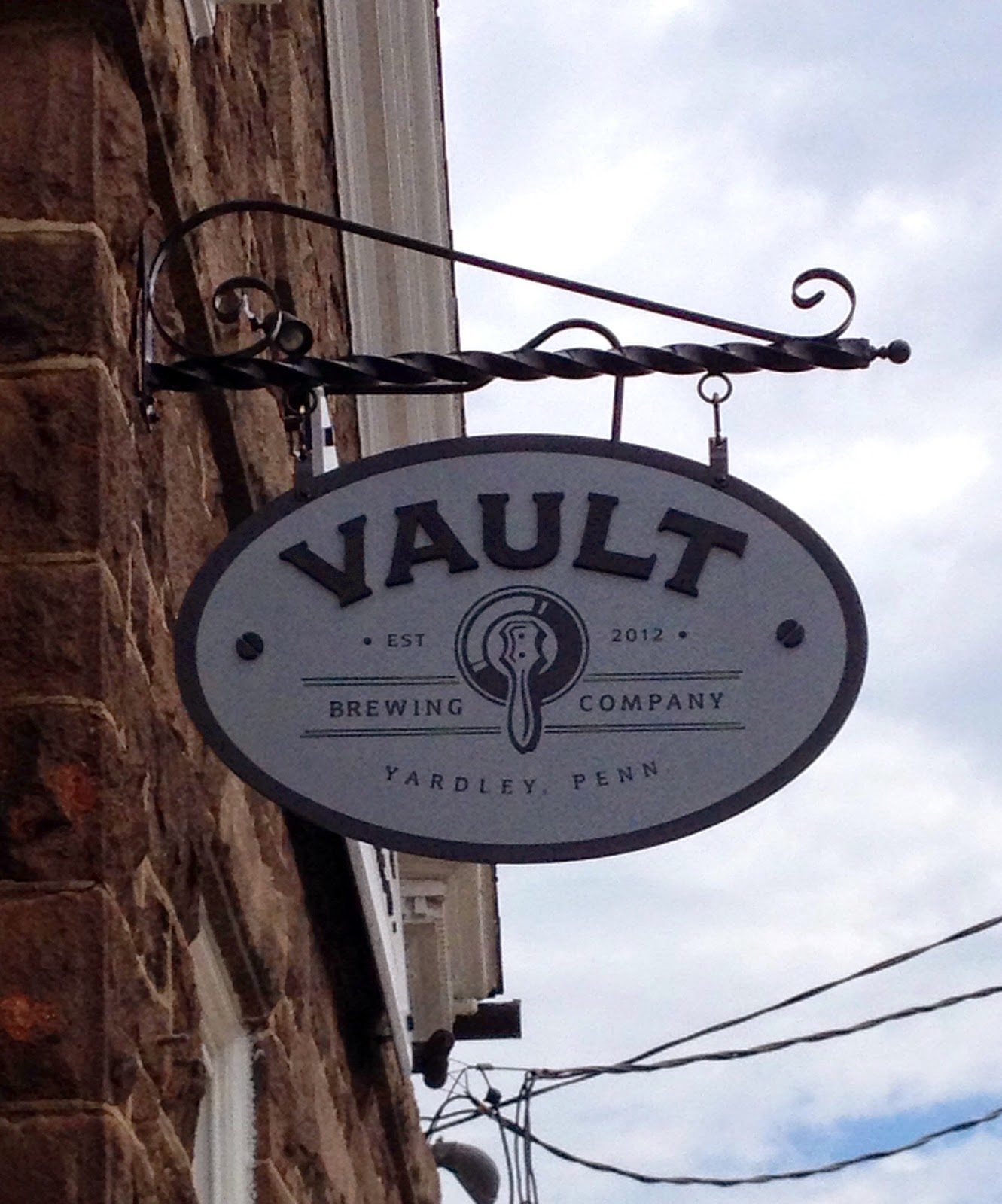 The sign said it didn't open for business until 4 PM, which eliminates it as a lunch place, but the door was open, so I walked in. I immediately met the core of Vault Brewing, including owner James Cain. His brother John is co-owner. And they have definite ideas about what they want their establishment to be--and NOT be.

We chatted for a bit and exchanged contact info, and I told him I would be back to do a full review very soon. There is much on the menu that I suspect would pique the appetite of the missus.

On James's website, I learned that the striking interior of the Vault was devoid of TV's, as TV's detract from interaction with other patrons, something which the Vault encourages.


I think that's a great idea. And the fact that your beer travels just fifteen feet from the kettle to your glass is another positive.

Now if they would only confiscate peoples' cell phones and lock them away in a Vault for the duration of the visit, we might get some real interaction...

Stay tuned for the follow up review, but by all means, check out the quaint town of Yardley, PA. In the words of Arnold Schwarzbier, "I'll be bock."