In The Vault at Vault Brewing 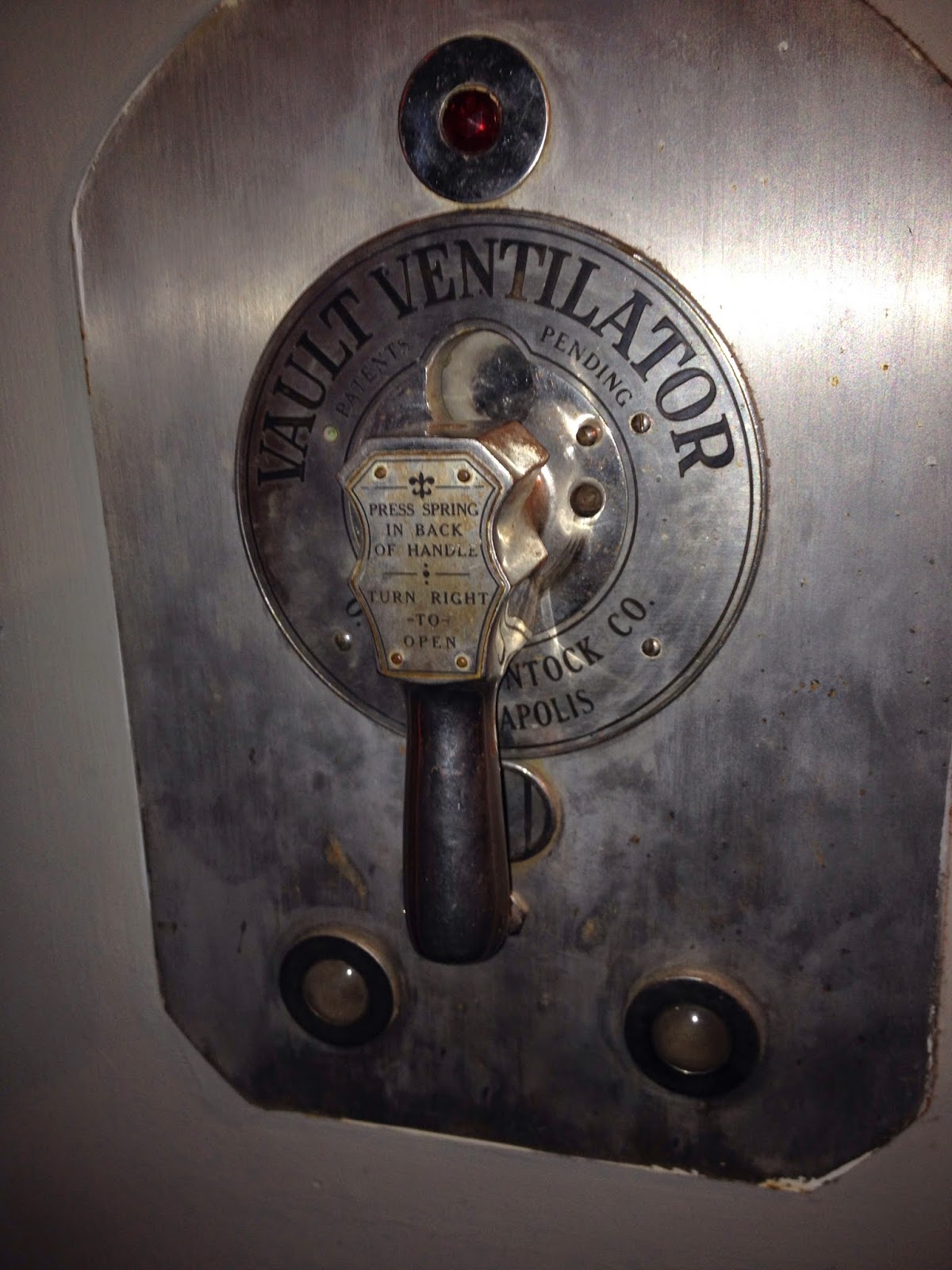 In his famous short story, "The Cask of Amontillado," Edgar Allan Poe's Montresor led his nemesis, Fortunato, into the deep recesses of the catacombs. Once down there, Montresor chained his enemy to a damp wall and then sealed the opening with bricks. Fortunato is still there, according to Poe, though probably not in the same condition he was in when he went down.

I thought of that story today at Vault Brewing in Yardley, PA, when co-owner John Cain brought me into his vault. Vault Brewing is housed in the former Yardley National Bank, and that imposing structure, with walls two-feet thick, was built around the vault.

The vault now houses cold kegs of the beer John and his brother and co-owner James make on the premises. John lured me in under the guise of showing me the device that serves as the logo for Vault Brewing. It's a valve that was installed when the bank was built, and it has a special oxygen provider that can (still!) be activated to pump oxygen into the vault in the event some hapless bank teller got locked inside accidentally. Those two-foot thick walls would not permit any sound to penetrate, so the trapped person would be able to breathe until help arrived. John demonstrated it, and as it whirred, I felt a twinge of Fortunato-itis, so I exited quickly. Besides, it was cold in there.

And the premises, like the food, the beer and the co-owners, are fascinatingly unique. John and James, Doylestown-born, traveled the world with their peripatetic parents, and they found themselves in Mornington, Australia, a bit south of Melbourne. They visited a friend's brewery and simultaneously had what John calls an epiphany: HEY! WE COULD DO THIS BACK IN BUCKS COUNTY!

So they did, but not without some obstacles. They had settled on Yardley, a charmingly quaint suburb of Philadelphia with an appealing demographic for what they had in mind. They first tried to launch in an old brick building in another section of town, but the neighbors--probably canoe beer drinkers-- weren't keen on having a brewery in their backyard. So the hunt for a suitable space was back on.

Coming upon the closed bank, they walked in to explore and had another epiphany: WHOA! WE COULD REALLY DO SOMETHING COOL HERE!

And indeed they have, though getting the rooms the way they wanted posed some serious challenges. How, for example, to get those big mash tuns and fermenters in through any existing door. Bank doors, especially back in those days, were far from wide and welcoming. The solution? Cut a wide door opening in
the side of the place, and use winches to set the massive equipment in place. It was worth the effort, however, as anyone entering is met immediately with towering, gleaming tanks and a comfortable bar. There are also tables in two rooms and on the deck for patrons to enjoy the food.

The food, according to John, was a pretty big obstacle itself. When the brothers realized they would need more than just beer to attract their target clientele, they turned to James' wife Anna. (James was actually married to Anna in the famous Fonthill Castle at Doylestown.) Anna, the first chef, designed the first menu, though she has since handed over those duties to others who work in an open kitchen with a gleaming copper wood-fired stove.

Vault Brewing's servers are trained to know which food to recommend with which beer, especially when new beers come out, like the one percolating and fermenting in this brief clip. The staff is genuinely friendly, so get to know Alex, Jackie and Brooke.

James and Head Brewer Mark Thomas set the brew schedule, and they like to experiment. I asked John what was the weirdest beer to come out of their collaboration, and he said, without hesitation, "Habanero IPA." That it sold exceptionally well is proof that with risk comes reward.

John also allowed that their beer menu is varied and wide, as Vault Brewing wants to provide something for everyone. A look at what's currently on tap on their website will verify that approach. I had a St. Cecelia's bitter, and it was delightful and right on style. At 4.4%, it's as good a session beer as you'll find.

Their growing clientele, in the 30-45 demographic, appreciates good food, good beer and a great atmosphere. They also seem to appreciate the fact that there are no TV's in the place. That was by design. The owners want their guests to interact with each other, and as I strolled through the place, that's exactly what they were doing, though looking somewhat askance at me. But I'm used to that.

With James spending the day at the Jersey Shore, I asked John two final questions. First, where do you see Vault Brewing five years from now? He allowed that that had been a recent subject of discussion, but said that they would like to see "horizontal growth," meaning more locations, and/or a wider distribution for their beer if the bottling system can handle it.

And it was, ironically, because of a bottled beer that The PubScout visited Vault Brewing today. Every Sunday the brothers plan to sell specially bottled beer to the public, with a limit of two per customer. Today's offering was a 9% Barrel-aged Russian Imperial Stout. So there I was.

Final question: Are you having fun?
And a broadly smiling John Cain replied, "It's hard not to."

If you go, turn off PA Rt.32 onto E. Afton, go over a small bridge, then look for Canal St. on your left. That's the easiest way to park right behind the place.

And if you get invited to visit the Vault, make sure the guy inviting you isn't named Montresor.