Worth the Wait at World of Beer

After a three-week delay, New Brunswick's World of Beer finally opened its doors.
It was totally worth the wait.
Sure the gleaming interior, with those fifty taps ready to obey your commands, and those two huge, brightly lit cold cases full of soldiers awaiting their orders will attract the eye. 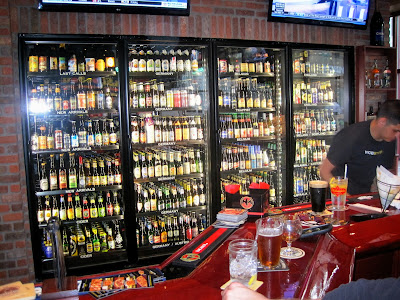 And the entertainment area will no doubt attract the ear (though the stage had to be rebuilt because local ordinance mavens didn't like the stairs, causing part of the delay).
And the beer choices and the food (the flatbread offerings are excellent) will certainly attract the palate and the nose.

But this quaffer was wowed by something else entirely: an efficient, friendly and surprisingly beer-savvy staff.
Not that they had any choice. Just to be a server here requires two weeks of training in Chris Metcalf's "Beer School." What Chesty Puller was to the Marine Corps, Chris may be to the WOB.
"I love beer training," said Metcalf, technically known as an "opening coordinator." 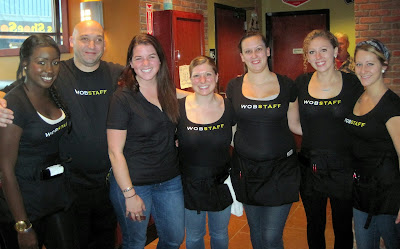 Chris brought out the two tests his staff had to pass to get the job. One of them was fifteen pages long, and there were 150 total questions. A grade of 90 was needed to get the job.
As I looked at some of the questions, I had my doubts that all servers--including my own, the affable Glenn Miller-- knew this stuff.

With Glenn Miller off somewhere getting "In the Mood," I put a passing server, Christina, to the test, asking her to answer the question about the difference between a mead and a braggot.
"Mead is a honey wine, one of the world's oldest fermented beverages; and braggot is mead made with malt and honey."

Dayum. That's what I call "prepped."
"This group learned a lot about beer in a very short time, and they were a very attentive class," said Metcalf. If it took an extra three weeks to become this beer proficient, it was clearly worth the wait.

So will the customer learn, considering the beer info provided at the table. Two large menus are provided at seating--one with the fifty current tap offerings and another with beer history and alphabetically listed beer styles

Food prices are pretty reasonable, too, with Ale-Battered Shrimp coming in at $9 and the delicious Flatbreads checking in at just $7. And the food menus cleverly come with beer pairing suggestions. My BBQ Chicken Flatbread paired very nicely with my Breckenridge Vanilla Porter. There's even an item called a "Pint of Bacon," which should attract millions.


The place is not "Cheers" cozy, nor was it designed to be, but its layout is very conducive to interaction, and at 5:45 it was SRO. There was a grand opening ceremony set for 6 PM, but having been there since 4 PM faithfully serving my loyal readers by doing my "research," I didn't stay.

How long the honeymoon period will last at WOB cannot be known. Nor will WOB's impact on local beer spots in close proximity. But one thing is certain: WOB is a WIN for beer nuts.

Add to that a knowledgeable, friendly and efficient staff, and good food, and WOB should be a pleasure to visit.