It began as a night of serious beer education.
But it concluded as a night of hearty laughter,  an unforgettable demonstration of "dry-hopping," raucous camaraderie--and not a few surprises in terms of beer winners.

Scott Van Guilder, Manager of The Office Beer Bar on Rt. 22 in Bridegwater, has been assiduously monitoring his beer lists, providing his customers with some exceptional offerings. But only locals seem to know about them. So Scott and yours truly devised a plan to widen his "catchment area," and, in the process, to let the word go forth that this Office has quality beer.

Part One of the plan was put into action last night with a blind beer tasting that involved educating about 30 fun-loving folks, a number of them beer neopyhtes, as to the best way to appreciate beer using all five of your senses. You can take that same course by clicking on the Beer Sense link in the top right corner of this blog. Ten beers would be sampled and evaluated and the numbers tallied to see which beers appealed to most "average" beer drinkers.


"This actually helps me in terms of deciding what beers to bring in, "said Van Guilder. A distributor or brewery rep can push whatever they want, but what matters to me is what sells, and this event opened my eyes."

The audience, though perhaps "average" in terms of beer experience, was laden with celebrities. Three of the wrestling coaches from South Plainfield's Undefeated No. 1 Wrestling team were on hand. Budding news anchor Rob Dickerson made the trip, as did 24 members of the storied CJMRG Motorcycle club, perhaps the most famous area club behind The Fugawis. And Brewer Mike Sella of Uno's and Basil T's fame showed up, though a home emergency necessitated his departure. Former Playgirl models Nancy, Natalie, Angie and Heather were also on hand. 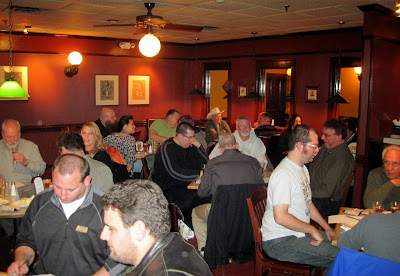 Given rating sheets (and pens) for ten offerings, the attendees conscientiously rated the beers in terms of appearance, nose, mouthfeel and taste, and then assigned an overall impression grade. In between servings, there were trivia questions and giveaways, and a brilliant local raconteur told of his own embarrassing experience in the Finals of a $10,000 Trivia Contest in Atlantic City.


The results of the tasting, though, were surprising.

In order of appearance, the beers were:

With soon-to-be weekend anchor Rob Dickerson assisting me, we tallied the votes when the tasting concluded. Keep in mind that, unlike in the wine arena, no beer "experts" will ever tell you what you should be drinking. The simple rule is "Drink what you like." And in ascending order, these are what this group liked:

And the winner on the night was--GREAT LAKES EDMUND FITZGERALD PORTER! 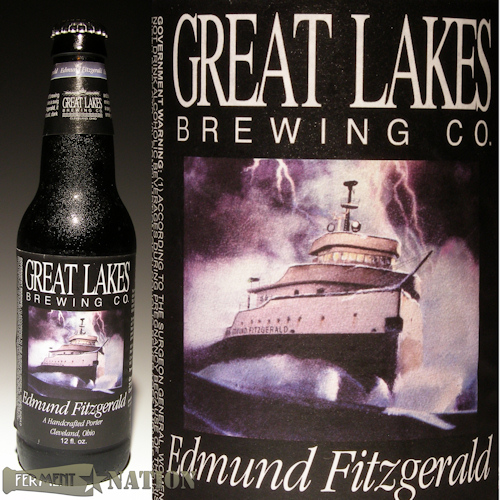 But the event did serve to alert people to the fact that The Office has some outstanding beers--and food--available. And by simply printing this page, you can get 10% of your beer and food order anytime you visit the Rt. 22 locale. Rob Dickerson decided that The Office is now his "Official" new bar, even though he comes from 30 minutes away. The smart money says more will follow.

1.
I
Part Two of the plan goes into effect on December 3 with a full-blown Holiday Beer Dinner. Scott did solid prep work with this event, and I'm looking forward to hosting that December dinner. With shirt and cap giveaways--including a giant Beer Bong won by "Lucky" Natalie Lay, the dinner promises to alert even more people to the notion that at this Office, anyway, it's perfectly acceptable to work late.