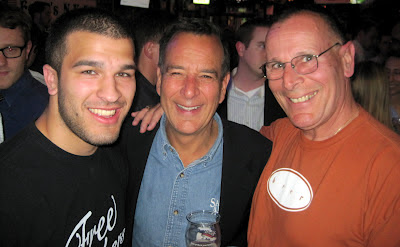 Shaun Clancy owns Foley’s, an Irish pub across from the Empire State Building, and the pub  made news in 2009 when its point man  John Mooney banned the singing of “Danny Boy” on St. Patrick’s Day. The ban, considered sacrilege by diehard descendants and  lovers of the Olde Sodde, made the news and earned the iconic pub scads of free publicity.
Mooney and Clancy teamed up again before last year’s Super Bowl to institute another ban, this one of any beer made by Sam Adams (Brewer-Patriot, if you didn’t know) in order to show their NY loyalty to the eventual champion Giants. 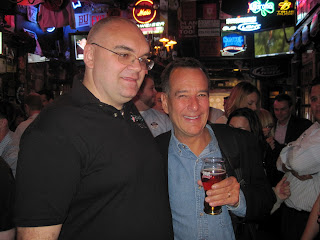 The Giants may have won the Super Bowl, but the Patriots--and Foley’s—won last night. Jim Koch himself, owner of the Boston Beer Co., arrived at Foley’s last night and “The Patriots” took over 18 of Foley’s 40 taps with only Sam Adams stuff being poured during the night.
Doing some of the pouring was Koch himself, who, thanks to a brilliant advertising campaign, may have a higher recognition factor than NY’s Mayor Bloomberg. Koch is devoid of pretense, talks to folks with a twinkle in his eye and a joie de vivre, and exudes a love for beer that is infectious. Notable quote: “All beer is good; some beer is better.” He was a magnet for the Foley’s crowd last night as everyone pressed close to meet him and snap a picture with the guy who began brewing in his kitchen and turned his company into the largest American-owned brewing company.
A company does not get that title solely because of adverts, however. The bottom line is the beer has to be good, and Koch and his brewer patriots are committed to quality in everything, from ingredients to final product. In the PubScout’s view, as well as in the view of top professional brewers like Climax’s Dave Hoffman, Sam Adams beers are always “dead on” when it comes to style. That’s not to say that everyone will—or should—like every style, but you can’t go wrong with a Sam in a style you like. The number of styles seems to be increasing every day. 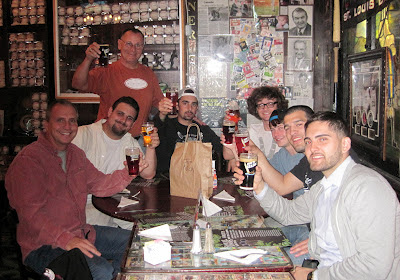 And The PubScout likes many of them. Via invitation from Mooney, who is also linked to promotions at Garwood’s Kilkenny House, I attended last night’s affair with The Malt Mavens of Montclair State University, a group of nascent craft beer lovers who are eschewing cheap, watery swill and learning to become discerning—and responsible-- beer drinkers.  You can’t ask for more than that during American Craft Beer Week. You can see their pictures and others here, and take note of how Kyle gets Jim Koch to crack up by asking, “So, is the word Budweiser considered a swear word in your house?” 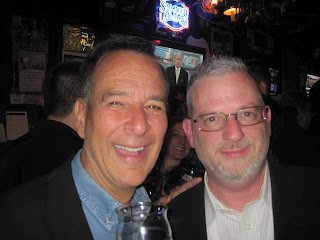 Although this was The PubScout’s first visit to Foley’s, it will surely not be his last. And if you’re a lover of good pubs, good beer and especially baseball, make haste to Foley’s. You’ll likely be there for a long time just marveling at the memorabilia in the place—and at the facilities in one of the oldest men’s rooms in the city. The food is good, the service efficient and the servers delightful. A special shout out to Kathy, Ciara and Steph is warranted, just for putting up with Larry. And though he had us all in stitches most of the night, they’ll know what that means.
Posted by Kurt Epps-The PubScout at 7:35 AM