Rt. 35 Alehouse Tavern on a Mission 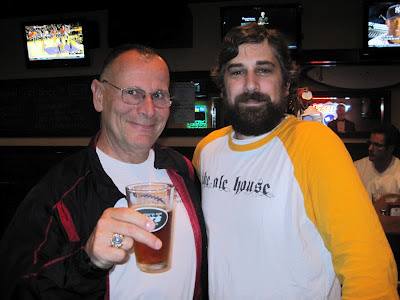 Residents of central Middlesex County, especially in Sayreville, South Amboy, Perth Amboy and environs may remember an iconic bar on Rt. 35 in Sayreville known as Connie’s Bar. The same goes for fans of a band called Bill Turner and Blue Smoke from way back in the day, because they played frequently at Connie’s. It was a magnet for country-western lovers as well as for mainstream beer lovers.
Connie’s has gone the way of the eight-track tape and cassette, but a new place has risen called The AlehouseTavern and Tap, and they may be on to a winning business plan. The place itself is hardly opulent, reminiscent of the old shot and beer joints of days gone by, but a place doesn’t have to be flashy to be good. Apart from the plethora of good beer choices, the menu, consisting mostly of pub-grub, is very reasonably priced, and more importantly, pretty good. I had a really good, juicy and tasty Classic Alehouse Burger, and the missus enjoyed her bar veggie pizza, which was a lot bigger than most I’ve seen. I looked down the bar and caught another couple enjoying wraps so large, only Sasquatch could hold them in one hand.
I noticed that Jason the barman had some very toned and muscular calves, probably because he had to run between two split bars to serve his customers, and that stream increased as the clock ticked past 8 PM. He advised that both bars would be packed by 10 PM. There aren’t many tables if you’re looking for a secluded romantic evening, unless observing a spirited game of billiards is your idea of romantic. But there is another kind of romance, and that comes from sitting at one of two oval-shaped bars where you can see the folks across from you, and maybe strike up a conversation with those adjacent to you. You know, the kind of bars that actually encouraged human interaction before the iPhone monopolized it.
Thankfully, the new owners are diligently trying to wean away the locals from bland, fizzy, overly-cold mainstream beer into much more interesting and flavorful beers. In fact, this place is unique because it has almost as many flat screen TV’s as it has beer choices—30. Beer choices between tap and bottles approach 50, and barman Jason allowed that he has a Herculean task. Most of his original local patrons  are, like Connie’s old clientele, devotees of mainstream stuff and may have to be dragged kicking and screaming into the world of good beer. But Jason says, “Little by little, they’re coming around, and liking what they’re drinking. Then they order it again and experiment even further.”
Taps are rotated regularly, and the pub is always looking for suggestions for new beers, especially those of the local variety. To that end, Kane’s and Carton’s offerings were prominently displayed, and Beach Haus may be getting a call.
All the North and Central Jersey bennies who dread spending two to three hours in choked Parkway traffic on their way to the shore this summer would do well to spend those hours here, as Happy Hour runs from 4-8 PM. After grabbing some fortifying food and brew, you can easily hook back up with the Parkway by going south down Rt. 35 to Laurence Harbor and hanging a right turn...total distance about two miles from the Ale House, after the traffic has eased.
Sure, the place isn’t fancy, but  neither are its prices. A couple can eat and drink well for $30 and feel sated upon leaving.  In all, a very comfortable pub to call home—and to call home about—and it seems the clientele is increasing every day.The PubScout will definitely make a return visit.