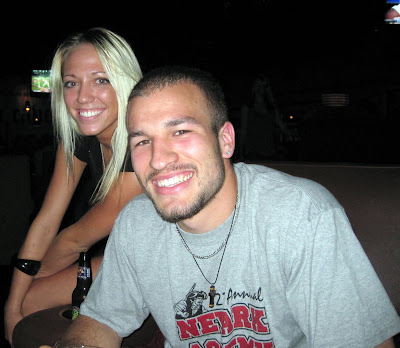 Parents send most of their life messages to their children by example. And as a parent, you always wonder if your message is getting through. When I began writing about beer in 1996, my three sons were young--9, 6 and 3, to be exact. Yet they were constantly exposed to good beer--at my table and on the road. I fully believe that by the time 5 years had gone by, they had visited more pubs, brewpubs and breweries, both stateside and abroad, than many adults.
It was my hope that by exposing them early  to quality beer, what it was for and how it was to be savored and enjoyed, they might avoid the pitfalls of high school--and more importantly--college binge drinking. I did not want to learn that they were part of a group that attached funnels to their heads.
I was buoyed somewhat when my eldest, Brett (above), went away to college and within a week expressed some shock that "these kids are drinking Natty Light!"
That choice, of course, was likely dictated by economics rather than beer knowledge, but I thought that perhaps my approach had borne fruit--of a sort. His own wallet being none too fat, I'm sure he sampled the watery wares of Keystone Light, et. al. from time to time. 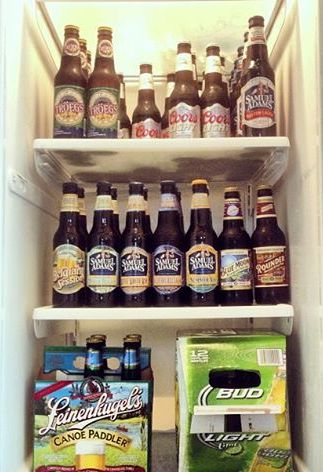 But he has apparently progressed satisfactorily, if the picture here is any indication. He took a shot of his fridge before a gathering at his home to share with me what he had in his cooler. Apart from the top center and lower right, it would appear his early beer education was worthwhile.
When I questioned him as to the presence of Coors Light and Bud Lime, he said that they were for his non-beer savvy guests.
Which is one of three reasons I ever had Bud or Coors in my fridge. The other was that I wasn't about to waste good beer on those who had no appreciation of it--nor wanted any.
The third reason was it was very cheap.

A dad always likes to think he's made a positive difference in the lives of his progeny.

In the beer category, at least.

Good job, son!
Posted by Kurt Epps-The PubScout at 8:00 AM