The Durham Boat (the very kind George used to give the Hessians a memorable Christmas present in 1776) at the Festival entrance did not augur well. Unlike last year, when she produced one of the ten best days of the year, Mother Nature threatened to be far less accommodating for beer lovers who flock in droves to this riverside event at Washington's Crossing State Park on the PA side.
But the stormy forecasts produced little rain at the event where 64 breweries from around the country proffered their wares to a thirsty, happy group of beer-revelers. At just about 3:30, rain sent beer nuts under the tents for about 15 minutes, and then the skies cleared again.
As always, certain brewers had longer lines than others. Surprisingly, (or maybe not) Avery kicked before the two hour mark, and the lines at Southern Tier were equally as long as the lines to the porta-potties. Also as usual  a handful of solid food vendors peppered the area, and lots of folks could be seen balancing a Nomad's pizza in one hand and their two-oz. serving glass in the other. Others had the pretzel necklaces for sustenance in case the lines got too long. 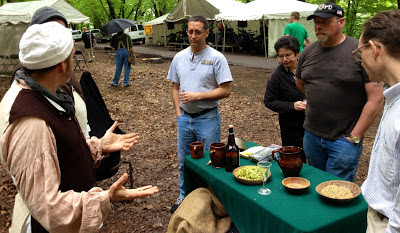 In a very welcome and interesting twist this year, the organizers invited the Brewers from Pennsbury Manor to provide ongoing demonstrations of colonial brewing practices, and their presentation, made in period gear with period accoutrements was fascinating. Their product, which Doug Miller of the PA Historical & Museum Commission graciously allowed yours truly to sample, was darned good. One needed only to pirouette to the Bavarian Pretzel stand behind and acquire a huge pretzel sprayed with Madeira to be at one with George Washington himself.

The festival itself, headed by Glenn G.W. Blakely, owner of Isaac Newton's Pub in nearby Newtown, PA, is designed to assist the Friends of Washington's Crossing Park in their quest to maintain and preserve the historic area. Glenn and his fellow patriots opened the festivities with a Huzzah-filled volley of shots across the river from the Durham boat at the entrance. The video is here and the participating breweries are here.

As at most beer festivals, the taste buds go into shock after the first 50 or so 2-oz. samples, but there were some fine offerings that generated long lines. Green Flash Le Freak was one and Yard's, offering their outstanding GW Porter and TJ Tavern Ale was another, in addition to those aforementioned. Husband and wife team Kristin and Tony Caine (yes, they met in a bar) handled the busy drafts throughout the day.

There are always breweries at this vent that the average beer drinker doesn't usually get to sample. My eye, inexplicably, was drawn to one called Naked Brewing.  The brewfest being a generally classy event, I did not get my hopes up too high. But any disappointment evaporated after chatting with the very personable and enthusiastic Kathy and Jennifer. Kathy's husband Brian is the VP of Brewing and their beer was very tasty indeed.


In all, and in the face of an angry Mother Nature, Glenn Blakely and friends provided another memorable May outing at the riverside. And, truth be told, what's a little rain when you consider what George and his embattled, beleaguered troops had to contend with there to give birth the good ol' USA?

I'll drink to that any day.