The Battle of NY and Boston: A Personal Perspective 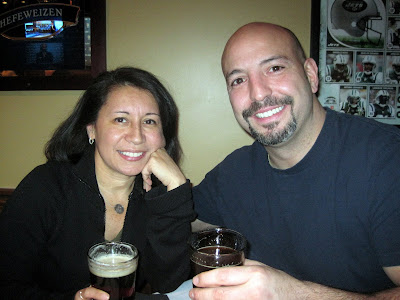 The beer musings of Beer-Nut John Gonzalez have appeared here before. But this time, SubScout Gonzo shares his own unique perspective of the recent Battle of The Beers: NY and Boston held recently at the Edison Fox and Hound, at which he and his lovely wife JulieAnne were paying guests. One look at her, and it's easy to see he married "up."
Herewith his offering:

What a blast my wife, JulieAnne, and I had at the Fox and Hound Monday night for the Brooklyn vs Boston Beer Bash…our first, and for sure not our last, beer dinner. For those who have never been to the Fox and Hound, this fine establishment comes dutifully equipped with plenty of large TVs, an abundance of fine dark wood, prime seating throughout, and an excellent array of beers on tap and in bottle.

Arriving early, I couldn’t wait for the dinner to start, so on the suggestion of the Pub Scout – I had 2 bottles of Founder’s Arrogant Bastard – a fine Scotch Style Ale of 8.5% ABV). The Fox and Hound looks to be real homerun location for any and all occasions when you want to turn a long day into a good night!

Pitting the Brooklyn Brewery vs. Sam Adam’s Boston Beer dynasty in a beer dinner was a most creative and inspiring concept, and both breweries gained at least one new loyal customer.

The Bash begins with a Shrimp Toast/Bruschetta combo which was very nice, served with Brooklyn Sorachi Ace and Sam Adams Tripel. Round One goes to Brooklyn on my scoreboard, hands down! I begin to understand what I’m actually doing here! Chef Michael has done his homework – matching the right beer with the right food so that your taste buds say thank you instead of…well, you know.

Round 2, the salad (What did Homer Simpson say about Salad?), was accompanied by Brooklyn’s Local One and Sam’s Tripel. I felt that the Local One HAMMERED the Tripel this round and now leaves the venerable New England juggernaut on the ropes. But not for long, rounds 3 & 4 – the pasta and entrée rounds – Sam rallies back with a great one-two punch of their own serving the Mr. Consistent Sam Adams Lager and their flavorful Griffins Bow barley wine compared to Brooklyn’s own lager and their barley wine, Monster. At this point my taste buds are doing double duty and loving it! Chef Michael has gone above and beyond pairing the right foods with the right beers. Each serving came across seamlessly and made for a great dining experience.
So it’s tied up two rounds apiece – the overtime tie breaker round comes up next! The delicate dance of pairing beer and dessert reminds me of a time in my life where I felt any and all beer goes with any and all dessert! Now that I am so much more mature, stately and well-rounded (…thanks to my dear wife), I know better.
Brooklyn’s Black Ops versus Sam’s American Kreik turned out to be a such a tremendous battle, I had to ask for more samples! The Kreik’s light body, great aromatics, and fruitiness was superb, but it could not withstand the perfect balance the Black Ops brought to the table. A great dark color, mild sweetness and with flavors of coffee, chocolate, and a hint of citrus made it an ideal beer for dessert. A dessert itself, It could easily help me end an evening with a cigar or with a scoop of vanilla ice cream.

On my score card , I have Brooklyn ahead on rounds winning 3 to 2 versus Sam Adams and company. Overall it was an exceptional night and JulieAnne and I look to repeat. Hopefully soon!
Posted by Kurt Epps-The PubScout at 6:06 AM