Boston vs. Brooklyn--A Night to Remember

After a week of bone-chilling temps--and with no football on the screen--who wants to come out to a pub on a rainy Monday night?

Well, if the pub is the Fox and Hound in Edison, and if the Chef is Michael Scofield, and if the beers are some of the finest in the country, apparently “only” 107 people.

“We’ve come a long way since our first beer dinner which welcomed just 25 guests, “ said Scofield, who is a management partner at the Fox and Hound by day, but a SuperChef by night. “What pleases me is that those same 25 are still coming out and are now part of a growing base of beer dinner fans here at The Fox and Hound.”

By utilizing an ever-more imaginative approach to his dinners, Scofield, who shows a deft hand in the kitchen, keeps packing them in. Adding a new wrinkle to this--his fourth dinner, he concocted a Battle of the Beers between Boston and Brooklyn, and for the first time in the PubScout’s extensive experience, the various courses were accompanied by two different beers instead of just one. The guests were asked to evaluate which beer went better with each dish, and their scores were tallied at the end. Even the giveaway glassware (with fancy bottle opener included) was arranged in the shape of  “B.” Sam Adams glasses on one side of the table; Brooklyn glasses on the other. And that was, unsurprisingly, another Scofield idea. 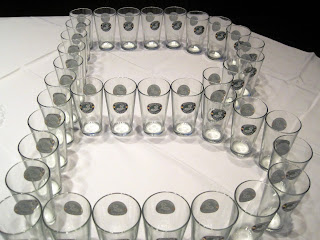 Playing on the lasting rivalry between New York and Boston, Scofield and his Shore Point point man, Gary Rosen, came up with exceptional offerings from Sam Adams (Boston) and Brooklyn Brewing. You can follow this link to see which beers accompanied which dishes.

His Fox and Hound serving gals were kept hopping delivering beers and food to the 107 guests who occupied two large rooms and packed the place. A little trivia with some very nice giveaways from the beer guys and a few (new!) jokes from yours truly kept the mood light. Because they were all supplied with pens and a scoring sheet, my personal visits to a various tables to show them the “2nd Grade Teacher Joke” seemed to bear healthy humor fruit.

But Scofield did not stop there. Seeking to make his next dinner even more interactive, he distributed “Build Your Own Beer Dinner” sheets, inviting guests to select the beers and the food menu for his next one. The winning entry will win two free passes to that dinner, and at $50 a pop, that’s some serious incentive.

But enough already with the blather. Who won? Boston or Brooklyn? Giants/Patriots, Knicks/Celtics or Yanks/Sox?

As the night progressed, I visited many tables to assess, in an admittedly unscientific way, how the guests were evaluating the beers. I discovered a prominent theme at many tables, and that was that the Brooklyn beers got the nod over Sams when drunk alone. But the Sams seemed to outshine the Brooklyns when paired with each dish. And that, after all, was the basis of the contest.

Indeed, the finally tally reflected that trend, as Sam Adams won every dish. To Brooklyn’s credit, the scores were close (kind of like those New York/Patriot Super Bowls) in every category except one--dessert. There Sam Adams American Kriek totally dominated Brooklyn’s exceptional Russian Imperial Stout known as “Black Ops.” 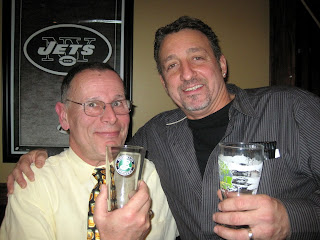 But the real winners on the night? Everyone who came out to see Scofield and his dedicated staff work their magic at his fourth Fox and Hound beer dinner.

When he announces his next one, mark your calendars.