The pluck, skill and general stick-to-itiveness of Brewer Chris Percello were all on display at last night’s Uno’s December beer dinner. Percello, who’s doin’ some fine brewin’ at the Metuchen site, took over the reins knowing what he wanted to do and where he wanted to go. And one of the places he wanted to go was home—that is, to keep a fifteen-year beer dinner tradition alive.

If that means he has to come up with the recipes himself, so be it. If that means he has to bring in fine commercial brewers—like Kane—to share the stage as he did last night, so be it. If that means he orders his fiancée Natalie to churn a creative ice cream for days while violating all sorts of child labor laws, so be it. And aided by a willing staff, Chris pulled off another winner, putting his signature on the Uno’s beer dinners with a solid exclamation point. He even added a few new wrinkles— a specially brewed IPA to accompany the Cheese Course and party favors for everyone--not just trivia winners—to take home.

A bit about that IPA first. The standard Ike’s has always been a PubScout favorite, but Chris decided to experiment with Belma hops, a relatively new hop, and offered it alongside his Station House Red for the Cheese course. Yielding all sorts of flavor notes, the Special IPA, served directly from a keg, drew raves from regulars and newbies alike.

And the raves just kept on coming with the second course. Officially listed as  Mushroom and Mozzarella Arancini Paired with Driftline Oatmeal Brown Ale, the dish somehow (probably thanks to Lenny) acquired the name Chris’s Balls, since Percello made the risotto mixture and actually shaped the globes. Whatever they were called, The PubScout admits to having found them delightful, and the pairing with Kane’s Driftline was a winning combination. I could make a meal out of that pairing, though I would admittedly, need more than just the standard number of balls that came with the package, and my Driftline portion would have to be longer.

Mike Kane was in attendance, along with his very knowledgeable sales guy, Glenn Lewis; and both gave excellent descriptions of the beers they brought from their brewery in Ocean, NJ. All of their fine beers, besides being unfiltered, refer in some way to the ocean.  “Single Fin” (an old-school surfboard) accompanied the salad course in a fine manner, but for The PubScout’s money, the pairing of Chris’s Spicy Stewed Beef with Cheddar Cheese Grits accompanied by Kane’s Head High IPA was the combo that really scored. The PubScout is not a fan of overly spicy foods, but Chris’s beef dish just walked up to the border without crossing it, and the Head High served as a perfect complement.

If Uno’s dinners are known for anything, it is the dessert pairing. No flowery description necessary here. Chris’s Scotch Ale (less “chewy” than in the past, but exceptionally smooth) and ice cream made with it, topped by a large triangular fudge brownie had many attendees sitting back and loosening their respective belts. They would have to eat their special party favor chocolate covered pretzels on the way home if there was room at their “inn.” 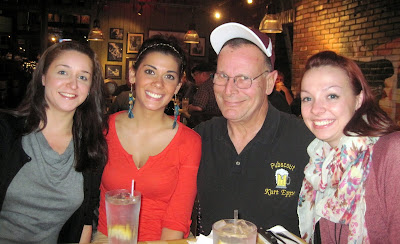 Or today if there was not.
The PubScout was definitely in the latter category.