For The Rogue in All of Us… 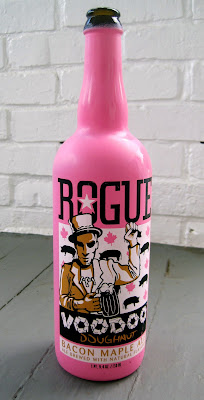 “Mama C” has provided me with some superb wrestlers since I’ve known her, but she may have outdone herself when it comes to beer. Some time ago, she posted a picture of FB of a pink-bottled beer called Rogue Voodoo Doughnut Bacon Maple Ale. When I commented on it, she sent me a bottle via her soon-to-be-Seminole son, Pete. Because, being a good woman and a wrestling mother, that’s how she rolls.
Today, middle son Kaz and I decided to crack it open. As required by the Five Sense test, we examined its color first. Listed as a brown ale, I assumed it would be much darker than it was, but it was nicely amber, albeit on the dark side of amber.
Then we schnozzed it. (That’s smelled it, for all you whippersnappers.) And simultaneously, we both exclaimed, WHOA! Maple and smoky bacon whacked our olfactory lobes.
Mouthfeel was almost as chewy as a good porter or stout, perhaps just a hair less. But it sure was smooth. And at 5.6% ABV, a bomber bottle won’t keep you from a late-night trip to Voodoo Doughnuts (Oregon) or Dunkin’ Donuts (your town). 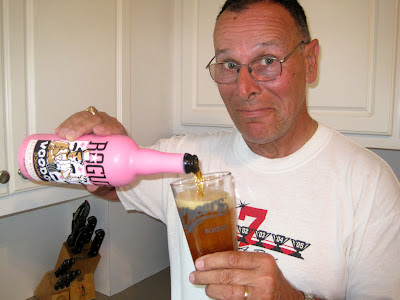 In the taste department, smoky malt was predominant, and there are good reasons for that. The bottle says there are thirteen ingredients go into the Voodoo Doughnut, and the first three are Briess Cherrywood Smoked, Weyerman Beechwood Smoked and House-Smoked Hickory. Add Great Western 2-row, Munich, C-15 and C-75 and the malt profile is completely understandable.
Then add Applewood Smoked Bacon and Pure Maple Flavoring. Follow that up with Rogue Micro Hopyard Revolution and Independent hops, Free Range Coastal Water ( I was unaware water could be “ranged” like a chicken) and Pacman yeast, and you’re in business.
A collaboration of sorts with VooDoo Doughnuts out in Oregon,where Rogue is located, and supposedly patterned after one of Voodoo’s signature donuts, this ale is said to pair well with doughnuts (Duh!) and pork. Maybe, but I don’t buy it. First of all, pork is a lighter meat, and as such probably pairs better with a a lager—like a Marzen. Can we say Oktoberfest? I think pancakes would probably go better with it, though anything with bacon would, too. (Is it just me, or is there like a bacon-orgy going on all over social media?) It’s not overly sweet, either, so don’t expect that it will replace the faux-syrups like Aunt Jemima and Mrs. Butterworth’s. Nor will it supplant real, authentic “maple surple” from Vermont. 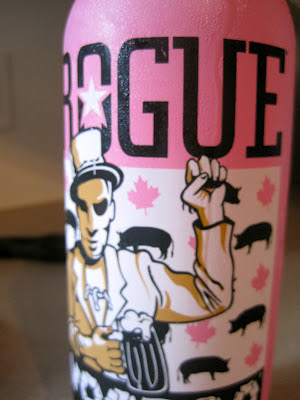 But it’s a good ale, and certainly worth trying. A bomber will run you about $13. Not bad, and you can substitute it for breakfast anytime you don’t feel like cooking or going to Denny’s.
Thanks, Mama “C,” and keep your eyes open for other cool beers.
And, um, wrestlers, if you have any free time.
Posted by Kurt Epps-The PubScout at 3:55 PM