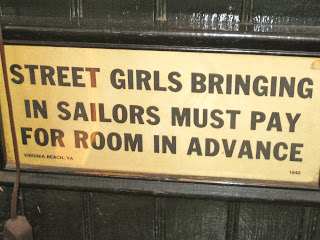 “Citibank Bill,” “Marathon Jen” and “Italian Vince” might well have been fictional characters in the legendary newspaperman’s many stories, but they are real—at least in a place in Lambertville, NJ called The Boat House.

The Boat House itself is a former garage, a carriage house, actually, set way back off a narrow street named Coryell St. in the Delaware River town. In fact, unless someone tells you where it is, you might never find it on your own, because it’s not listed on any of the regular maps and tour brochures. But that would be your loss, as the Boat House is nothing short of a remarkable hidden gem of a pub. 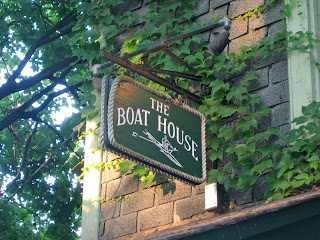 Serving only liquid fare, and with a very small bottled beer list, this iconic joint is not only hard to find, but worth the effort when you do. Situated directly opposite a more famous set-back restaurant called Hamilton’s, it is a feast for the eyes and the soul, especially if the seafaring mystique courses through your bones. 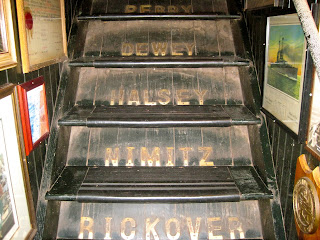 A friend tipped the missus and me to the place, and since The PubScout’s mission is to discover unique pubs, we located it. Its official address is 8 ½ Coryell St., and it’s frequented mostly by locals. With two floors and walls that scream “Nautica,” the pub is nothing short of fascinating. Even the bathroom walls tell sea stories, and the steps leading up to its second floor location are emblazoned with names like Perry, Nimitz and Halsey.

It’s a place designed for people—including perfect strangers--to meet and converse. Cell phones are verboten, which, in this writer’s view, is a blessing. Nothing is more annoying than people who come into a place, especially in groups, whose first impulse is to whip out their mobile devices, and surf or text their time away while there are real, live people to interact with. If I’d have been texting, for example, I would never have heard the well-heeled, silver-haired, cognac-drinking dowager on the second floor say, “You can come here a hundred times and find something new on the walls or ceiling that you’d never seen before.” 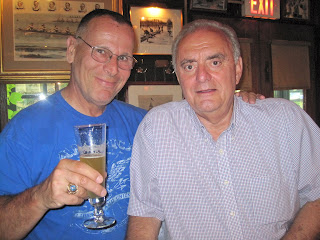 I struck up a conversation with one of the Boat House regulars, a very friendly, older guy named "Italian Vince." Formerly from Newark and with extensive experience in New York City, he regaled us with stories about his life, his family, his friends (Citibank Bill and Marathon Jen) and the Lambertville scene. An “Old School” type guy, he knew who Damon Runyon was, and his jovial manner and friendly repartee were delightful, the complete opposite of what you might find in your standard “bar boor” who talks your ear off because he’s lonely. Italian Vince was funny, friendly and sharp as a tack. He was also quite generous, refusing to allow the missus and me to pay for our drinks, despite our protests. 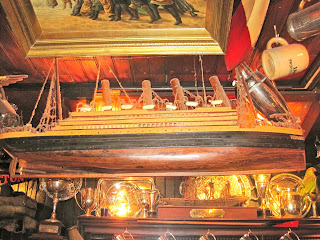 And speaking of drinks, the missus raved about her Bloody Mary (s), while I was quite satisfied with my Allagash White (s). What the Boat House lacks in beer variety, however, it makes up for with an incredible ambience, a museum-like interior and a clientele that is one of the reasons a guy goes to a pub in the first place—to socialize. Described as the perfect place to go for drinks before or after dinner, the Boat House is worth a visit. Or two. Or a hundred, just so you can keep discovering things. And it must be the definition of "cozy" in Winter, with that pot-bellied stove ablaze.

Parking can be a problem, so bring quarters in abundance, as the local constabulary checks meters until 9PM. You can outfox them, however, by chatting with guys like Italian Vince who will let you in on the free parking “tricks.”

Get to theBoat House. Turn off your cell phone.

And discover why pubs were invented.