A tasty "Lawnmower" Beer for your porch 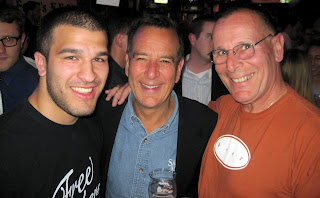 After learning of my connections to beer, the seniors I taught in high school would invariably ask me, “What’s your favorite beer?”
My response was always the same: “Whatever I’m drinking at the moment.” Of course, I had to disabuse them of the notion that the stuff they typically inhaled via a funnel strapped to their head counted—in my book, at least—as beer, and the funnel was certainly not the best way to enjoy it anyway.
They were fascinated to learn that beer actually came in a wide array of styles, for consumption with virtually any food, for a person in any mood and for me, at least, depended heavily on things like the seasons and seasonal styles. Whether or not I made an impact, I don’t know, because many of my former students tout their love of beers like Coors Light and Corona. 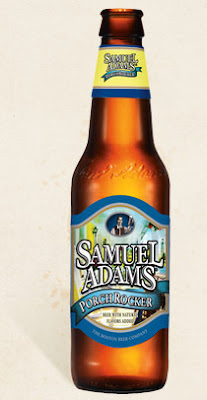 Not that there’s anything wrong with that. As I’ve always maintained, you should drink what you enjoy, and do it responsibly.
That said, I’m going to sing the praises of a relatively new beer from Sam Adams, made expressly for the summer season, though I view it as a reward for mowing the lawn and doing other hot, sweaty yard work.
It’s called “Porch Rocker,” and it’s done in the German Radler style. A Radler is a mixture of lager and German lemonade, supposedly born during some long ago German bike race by a publican who did not have enough lager to slake the thirsts of a tour of bicyclists. He therefore added lemon soda to the mixture, doubled his capacity, satisfied the bicyclists—and gave birth to the Radler style. Radler means “cyclist” in German.
There is no question that Porch Rocker is a summer beer, a Helles, actually—light, crispy, tart then sweet with a most interesting finish that sees the lemon, hops and malt dance together.
I have read many reviews about this beer, and while many pan it as too sweet, I did not think that to be the case. Unlike some reviewers, I tasted no saccharine qualities at all, but I did taste the marriage of lemons, hops and malt. I found it to be very different, refreshing and tasty, a beer which would probably please many younger drinkers of both sexes as not being too overbearing or--God forbid--DARK. It would pair exceptionally with a salad, lighter cheeses and seafood—especially calamari.
Granted, it’s not what you’d call a “session beer” and you certainly wouldn’t want to finish a sixer all by yourself. Three might even be too much, but one or two cold ones after some hot yard work can actually make you look forward to getting that task done quickly.
Porch Rocker is lemony, all right, but it’s also a real beer. It is NOT Mike’s Hard, Bud Lime or Corona. It is a classic twist on a classic Helles, proving once again that when Jim Koch’s brewers are working, the product is going to be on-style.
Do yourself a favor and pick some up. Sit out on your porch or stoop—or even poolside-- on a hot summer afternoon or evening and enjoy. I think you’ll be pleasantly surprised. As always, let me know.
Cheers!
The PubScout
Posted by Kurt Epps-The PubScout at 12:34 PM

PubScout, What would go great with that beer is an OPUS X cigar by Fuente.

True dat, Harry! There aren't too many things that cigar wouldn't go well with....