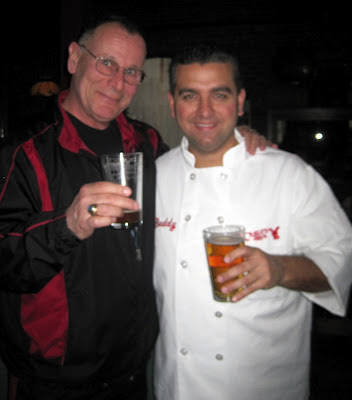 Bittings brewpub, Cake Boss draw overflow crowds
3/10/12
I had stopped into JJ Bittings brewpub in Woodbridge in the early afternoon to grab a sample of their anniversary Belgian Ale. Found a parking place right outside the front door, too. When I met Mike Cerami inside, he asked if I was coming back for the “party” celebrating Bittings’ 15th Anniversary at 4 PM. Having done the very first review of Bittings fifteen years ago, how could I decline?
So I had a pint of Brewer Sheehan’s very fine Belgian Abbey, sampled his Vintage Cherry Stout and left to do some errands and returned around 4:30.
Forget a front parking spot. In fact, I had to weave around a phalanx of video cameramen and photographers who had come out to chronicle the arrival of TV’s The Cake Boss (Buddy Valastro), who provided the special cake for this very special event. It was not only a celebration of Bittings’ tenure, but a hefty chunk of the proceeds on the day were targeted for a special foundation to a scholarship for a Woodbridge Marine who died in Afghanistan this year. Cpl. Kevin Reinhard of Colonia was one of six Marines killed on Jan. 19 during a helicopter crash in Afghanistan.
Even after dodging the paparazzi, as dignified and important a guest as yours truly (!) was relegated to a parking space way down in the NJ Transit parking lot behind the brewpub.
A party atmosphere inside was already in progress—free buffet with delicious foods, a band, the Cake Boss and his entourage, balloons and plenty of iPhone-wielding customers who wanted a keepsake of Buddy. Considering that the lines outside his Hoboken store often wind down into Jersey City, this was probably the closest they would ever get to the legend. Buddy was congenial and accommodating, giving everyone a chance to pose and he even signed autographs. One of those who posed was legendary Woodbridge Mayor John McCormack, a good friend of Bittings owner Cerami and an equally good friend of the craft beer scene. And cake, I suspect, by the smile he flashed standing next to Buddy.
Spirits were high throughout the afternoon with roving bands of cameramen following the celebs around this more-than-100-year old edifice hard by the NJ Transit tracks. Most of those in my immediate area, far from the madding crowd, had words of praise for the anniversary ale. Opinions were mixed on the Vintage Cherry Stout—which I enjoyed. Sheehan’s Barley Legal barleywine, on tap for about a month, also got good reviews from most. I’m sure its 9% ABV had nothing to do with that.
Having midwifed Bittings’ birth, I was quite proud to see how it has evolved under Cerami’s steady hand. It has surely seen its share of brewers, but Cerami has been fortunate to seek out and acquire some of the best available. Bittings is a neighborhood place, quaint and very much like the Cheers bar, where everybody knows your name. And that’s a major reason for its success.
The PubScout raises his glass to Bittings and its crew, wishing them at least another decade of success. The 25th anniversary party however, might necessitate my parking in Perth Amboy just to find a spot.
Check out more pics here!
Posted by Kurt Epps-The PubScout at 4:15 PM

I just take a peek and I discovered your post. I had a great time reading your blog and I find it very informative and this is worth reading.