Beers on the Boards a Huge Success 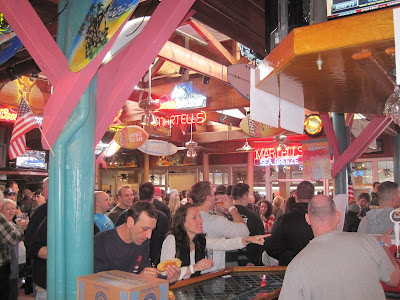 Not that anyone expected a Chris DePeppe production to turn out otherwise. DePeppe, who does about nine of these events a year in PA and NJ, including Beer on the Pier at Belmar, had his engine firing on all 12 cylinders for this first-ever event at Martell’s Tiki Bar in Pt. Pleasant. The place is perfect for this type of event, too.

The weather, which looked promising early on, took a chilly, rainy turn hard by the gray Atlantic, but no one demonstrated any displeasure as the entire event took place inside the cavernous space known as Martell’s. Twenty-six brewers were on hand to share their wares, and share they did, to the delight of the crowd. What set this beer fest apart from so many others, however, was that food was included in the price. And I’m not just talking overcooked pigs in blankets. Martell’s put out a buffet that was worthy of any gourmand, most being made with some of the beers being served. Selections included Macaroni topped with Crab, Beach Haus Hot Dogs, Cricket Hill Kielbasa and Kraut, Beef Brisket made with Yard’s Philadelphia Pale Ale, Fish and Chips made with Yard’s Brawler, Blue Point Tipsy Chicken, Balsamic Chicken with Bleu Cheese and Apples made with Winner Rental from Beach Haus, Scalloped Potatoes and a fruit and Cheese Italian Antipasto.

I spoke to many attendees, and while all praised the number of beer offerings and the variety of same, every single one commented specifically about the caliber of the food in the buffet, so Martell’s deserves great credit. So does DePeppe, for where do you get a buffet like that included with the admission ticket to any Beer Fest? And let's not forget the other co-sponsor, the Point Pleasant Beach Chamber of Commerce. It's nice when entities work together on projects that benefit the public and the community.

That could account for why both sessions of the event—afternoon and evening—were sold out. There could be close to a thousand palates passing through Martell's today. I was fortunate enough to be standing near the blokes who were unpacking Palm and Steen Brugge—two excellent beers—when I noticed a case of Rodenbach on the floor behind the bar.

“Are you putting that out today?” I asked the barman.

“Not till later,” he said with a wink. Needless to say, I was there when “later” happened, and the Rodenbach and I got along famously. But that’s not to say I eschewed the other offerings. Just the opposite. Using my handy two-ounce glass, I worked my way around to various tables—Carton, Kane, Tuckahoe, Beach Haus, Brooklyn, Staropramen and others—and enjoyed the samplings immensely, as did everyone else on the place.

With entertainment both inside and out, conviviality was the order of the day, and I even ran into my beer buddy Paul Mulshine, who makes his home at The Point. We chatted beer, politics, beer, government, beer, elections and beer. The beer discussions were the most memorable, and yours truly may have turned him on to Rodenbacher in a big way. I even got a chance to meet the “Captain” though his image will not be seen in any photos to your right.

Chris DePeppe and Martells’ did a masterful job with Beers on the Boards. The Pubscout can’t wait for the next one. Check out the pics here.