Just Another Day at the Artisan’s BeerFest

For thirteen years, the good folks down at Artisan’s have been providing great food, drink and service in a classy setting with an exceptionally friendly staff.

And that’s on a normal day.

When Oktoberfest rolls around, they pull out all the stops. Irishman Steve Farley’s Special German Menu, German Dave Hoffman’s beers, and in a hat tip to his chef, a classic Irish Red Ale, a stunning, efficient waitstaff prancing around in dirndls and even an oompah band called the PolkaDelphians to enhance the atmosphere. Add a joke or two from a demented emcee, and the recipe is complete.
And for the past thirteen years, the main order of the night is fun. Repeated choruses of “Ein Prosit” with steins hoisted skyward, vigorous ein, zwei, drei g’suffas and ziggy-zoggy-oy-oy-oys are standard.

Farley’s food and Hoffman’s beer never disappoint, served Beer Hall style at long tables, with Der Braumeister offering tasting notes before each beer, as he does each year. But this year saw some new wrinkles, at least cosmetically.

Three rookie Dirndl Beauties joined the “seasoned servers” of Mandy, Karinn and Meghan. Dominika, Victoria and Mark, the first male ever to serve in the hallowed halls of Oktoberfest Artisan’s. Of course, he wore a wig and dirndl costume to better blend in with his female partners, but most revelers—and I emphasize MOST—were able to discern that he was actually a male. Not that there’s anything wrong with that. 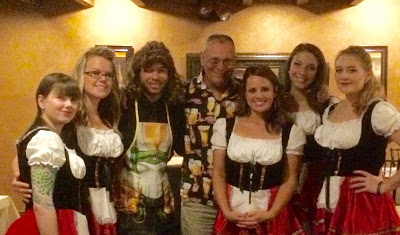 This annually big crowd was so bent on fun and frolic, that when the emcee left for a moment to visit the loo (beer does that, you know), a guest jumped out of his seat and led the assembly in a spirited version of “Sweet Caroline,” played in a previously unheard and rather avant-garde oompah-style.
The Polkadelphians themselves were also new (one bore a remarkable resemblance to Troy Aikman), though part of the same organization that has performed in the past. Their repertoire was interesting and eclectic, to say the least; and the “Petes” (who are the owners) got so into it that Panagiati kept demanding that they play “Never on Sunday,” and “Zorba the Greek.” At one point, he jumped up and called out “Stairway to Heaven,” until he was led away by his concerned family and security.

He did stay long enough to watch the traditional Tapping of the Oktoberfest Keg by a handsome lass named Emily, a former soccer star at St. Peter’s College. Exhorted by the crowd to “Whack the Tap,” she did just that and Dave’s classic Oktoberfest Lager spewed forth into waiting pitchers.

One might ask how this particular Oktoberfest dinner could reign supreme in NJ in terms of  attendance, and one might find those answers in the details above.

But the best way is to go to an Oktoberfest Dinner and become part of the special atmosphere that Artisan’s generates for this event.

Unfortunately, you’ll have to wait till next year now for that.
And I’ll need that time to recover.