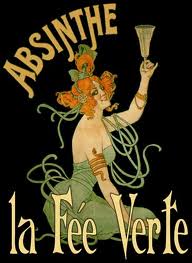 I had occasion yesterday to visit Easton, PA, and my usual stop when there is at Porters' Pub, a quintessential tavern with a remarkable beer list, a neat mug club and superlative food.

But this visit was a few blocks away at yet another tavern owned by Larry Porter called Black and Blue. It is one of the neatest drinking emporia I have ever patronized.

With a decor reminiscent of La Belle Epoque, the place exuded character and depth. The bathtub in the vestibule containing beer-related periodicals (like NJ Brew) lets the visitor know early on that this is not your buddy's sports bar. Dimly lit, except at the bar, the drinking areas had overstuffed chairs at a fireplace as well as tables for two and four.

And it has absinthe. Once illegal in this country (due mostly to temperance movements and myth), it is no longer, and entrepreneur Larry Porter jumped on the opportunity to stock it, making Black and Blue the largest purveyor of la fee verte--the green fairy--in the tristate area. Unsurprisingly, this pub also has an extensive and admirable beer list.

Hence, it was not difficult at all to imagine Edgar Allan Poe at one of these tables with a glass of absinthe, his marvelous pen and mind busy at work (though whether he actually imbibed it at all is questioned by serious biographers).

Technically, of course, Poe died long before La Belle Epoque, but Black and Blue is a place in which his brooding melancholy would likely have found solace. I know I found it, especially with a wide variety of absinthe, which I had never tried, on the menu. For the record, mine tasted like licorice skim milk. It was quite good.

Many people think Poe was a drug addict and an alcoholic (read this link for more), but, being a student of his work, I seriously doubt that the precision of his poetry and complex sentences could be accomplished while under the influence of anything much stronger than tea. And the reality is that his constitution was not well suited for alcohol consumption at all, hence a small amount could have a large impact on him. That's especially possible with absinthe, which is notorious for high alcohol content. The one I ordered (and thoroughly enjoyed) was called Vieux Carre, and it was 138 proof. That's kick-ass by anyone's standard, and it would have absolutely rendered Poe both inebriated--and literarily incapacitated--had he romanced it.

In any event, Black and Blue, located right across from The Courthouse, also boasts a very creative and delicious array of foods to have with your absinthe, beer or tea. I opted for an appetizer called Wild Boar Brat with a fig mustard that was delivered on a slab of polished granite, topped by a house made large pretzel. It was absolutely fabulous, though not overly large in portion, which would allow room to sample the other delicacies on the menu. Porter is a devotee of fine food as well as fine beers, absinthes and spirits, and he shares that passion with his customers.

I sat in an overstuffed chair in a darkened room near a fireplace on the night I visited, and there were five decorative skulls on the mantel. I asked Larry if this deco was for Halloween, and he responded no, that it was "year round." I suppose I can be forgiven if Poe and The Raven came to mind. But it was neat as heck to sip my absinthe and recall some of those famous lines which I have committed to memory:
"Ah, distinctly I remember, it was in the bleak December, and each separate dying ember wrought its ghost upon the floor..."

Be advised. Though its food and beverages are varied and delicious, this is not your typical pub. Interaction among customers is encouraged, as is personal reflection if you are there alone. It was oddly comforting to me to sit alone and absorb the unique ambiance of this establishment. In fact, it made me want to write this column.
And as I was finishing it, I realized that yesterday (October 7) was the anniversary of Poe's death. Spooky, no?

But will this column do for my career what The Raven did for Poe's?