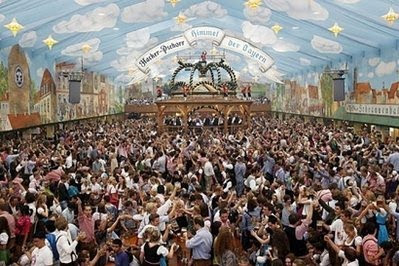 There are some occupational hazards to being a beer writer, apart from owning a wardrobe of pants for the Big-Butted Man. Not that I'd ever complain, mind you. But with the enjoyment of craft beer exploding around the state, logistics alone can sometimes be tricky.

Two sterling craft beer events in two distinctly different parts of the state took place. Uno's Cask Fest near Menlo Park and Beers on the Boards in Pt. Pleasant are both exceptional beer events and both run by guys named Chris.  Percello at Uno's and DePeppe at Martells' in Pt. Pleasant have solid beer pedigrees, so a dedicated beer guy would want to attend both, taking precautions, of course, to sample responsibly during one to safely make the other.

The Uno's event featured some outstanding cask offerings, delineated here in an earlier column. They must have had great appeal, because when I walked in at 1:15 PM, the joint was packed so tight you couldn't have fallen down if you wanted to. And you know you're in the right place when NJ's Beer Cognoscenti are already there to greet you.

The packed house was also good for  another reason beyond recognizing Percello's commitment to craft beer. As they have done for so many groups before, Uno's was donating 20% of each tab to the Jimmy D'heron Memorial Fund, a cause which remembers the sacrifice of this brave firefighter and the causes close to his heart--like a Burn Camp For Children.

In addition to the regulars, it was good to see the Pro Cure group from the Cancer Center in Somerset, another establishment and group of folks that are dear to my heart.

I wish I could have stayed longer, but Beers on the Boards beckoned, and I answered the call. For more Uno's pics, go here.

Heading down the GSP, stopping only in Manasquan to pick up my pal Harvey--who was just cleared to drink beer on Thursday after his brain surgery--I got to Martell's in Pt. Pleasant safely in advance of the 6 PM opening. Good thing, too, because the hordes that came for the evening session stretched out the door to the boardwalk. And that's AFTER 500 beer nuts attended the earlier session. Clearly, Chris DePeppe knows how to attract a crowd. 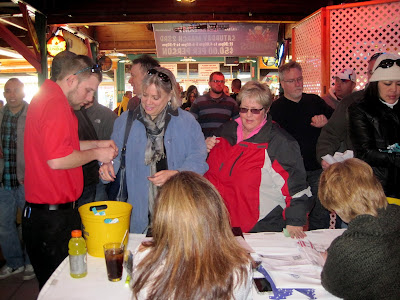 Unlike last year's event which saw temps so balmy parts of the fest were held outside on the Tiki Bar, this year's chilly weather precluded such an arrangement for the evening session. No one, however seemed to mind. Breweries from Cricket Hill to Starr Hill were there with their excellent wares for sampling. My friends from the Brewer's Apprentice were also on hand to give aid and comfort to those who are thinking of taking the plunge into homebrewing. The event also brought out guys like Michael Scofield, chef extraordinaire of Fox & Hound fame, who shared this tidbit with me: April 22 is his next beer dinner at the Fox, using the beers of Samuel Smith. He shared a secret about something positively sinful he'll be doing with that exceptional Chocolate Stout of SS. And with tongue firmly planted in cheek, swore that there would be no calories attached to the creation.

DePeppe's events are well-organized and attract a large variety of beer lovers--some who came all the way from Connecticut. But what makes this event unique beyond the variety of  breweries attending is the excellent food--all included in the $50 price. Martell's makes all the victuals, and believe me when I tell you this is not ordinary buffet fare. My pal Joe Skelly, who lives a stone's throw from Martell's was enjoying what he calls Irish Surf and Turf--Corned beef and Clams.


The layout of Martell's allowed for slightly freer mobility than at Uno's--but only slightly, because the sheer numbers of beer nuts trying to hold their beer and their food plates while sampling posed good-natured navigational challenges for all. Most of my beer buddies would certainly not want to bump too hard into ladies like those above or like those below.

In all, a most rewarding, albeit exhausting, day. I suppose I should consider myself lucky that the events were relatively close. I don't know what I'd do if such events were taking place at The Mohawk House in Sparta and in Cape May on the same day.

For more pics, go here.
Posted by Kurt Epps-The PubScout at 7:59 AM