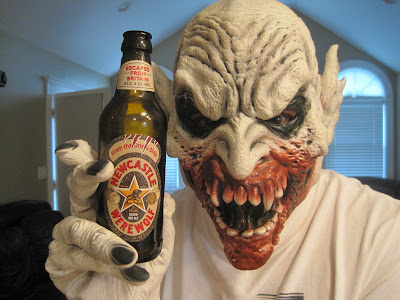 The subtle, almost imperceptible  changes in sunlight and temperature serve notice that my favorite season of the year—Autumn—approaches. Apart from the meteorological changes, the Fall also heralds a change in beer to perhaps my favorite style—Marzens. There’s just something about that malty lager that strikes a primeval chord in these aging bones, and it almost always occurs in mid-August. We start to notice that it’s getting darker sooner, and that wakes some ancient rhythms in us as well—a longing for heartier fare, heartier beer and a glowing hearth itself.
But it also kindles an ancient fear—fear of the dark. Not the dark in beer, of course, but the dark outside, because that is where the creatures of the night lurk, waiting to do us psychological, if not bodily, harm. Bogeymen on an October night seem much more plausible than those same chaps in Spring and Summer.
So if I’m waxing poetic  about the lagery pleasures of Autumn and Marzens, what the heck is that beer that odd-looking fellow above  is brandishing? It’s a “Blood Red Ale” called The Werewolf, and therein lies the tie-in. I sampled this brew at—of all places—a Wegman’s liquor store during a special beer-tasting event held in Woodbridge, and The Werewolf, with its clawed artistic label and its “Escaped From Britain” stamp drew me in visually. Billed as a “dual character” ale for Fall, this 4.5% ABV brew is actually a perfect session beer, and not only for Fall. I was struck immediately by its malty nose, its smooth, chewy mouthfeel and a sizable malt presence on the palate. Perhaps some will detect the sweet berry fruit notes indicated on the label, and they may notice a “bite” of bitterness as well, though I suspect any bite is “Comin’ through the Rye” as it’s made with Rye Malt.
I’m happy to see that Newcastle made this attempt, because they have excellent brewers as anyone familiar with their Flagship Brown knows. They may have to get to work by crossing the moors that surround Newcastle, possibly inviting one of Lon Chaney’s relatives for dinner, but if they're making beer like this, I say, "Run like Hell."
Regardless, it’s a great-tasting beer you can enjoy all through the Season of the Witch. The word “formidable” means one thing in English, and yet another in French.  Far from  being an English “Formidable (dreadful or fearsome) Beast,” this beer does deserve to be called “Formidable” in French—great or terrific.
Don’t be afraid, even if its blood red color reminds you of full moons and wolf howls. If this is what the Werewolf drinks, he won’t have the time or inclination to rip out your innards.