To Beer, or Not to Beer? 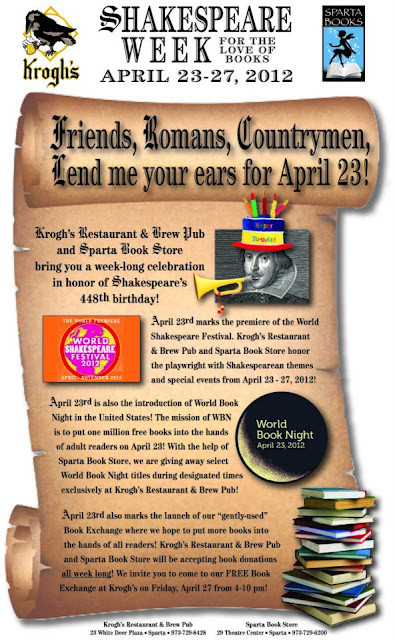 Dude, is that even a legit question?

There aren’t many pubs that could pull off live Shakespeare instruction on a busy Friday night, but thanks to the efforts of Bard-and-bookophile Andrea Taylor, Krogh’s Brewpub in picturesque Sparta, NJ did just that.
In fact, the Friday evening performance of a visiting “RichardBurbage” was the culmination of a week’s worth of activities dedicated to the memory of Stratford-upon-Avon’s most famous resident. Those activities saw a variety of cultural events, including a visit from a troupe of Shakespeare Players and an event called World Book Night, which endeavors to put free books into the hands of twenty thousand non- and light readers. Donna Fell of Sparta Books was the prime force behind that effort, and she and Andrea worked together to set up what looked to be a small bookstore along the back wall of the pub.
And what better place than Krogh’s, which is startlingly and comfortably  Elizabethan in interior décor and decidedly Elizabethan in its focus on ale? What the patrons of the pub learned last night—for free, mind you—is just why Elizabethan society was so often “in its cups.” They drank ale for breakfast, lunch and dinner because it was far safer and healthier than the water available to them.  That it made for a rather raucous society which included “groundlings” at the theater who might pickpocket and brawl occasionally during performances was just added “spice.”
The very British-sounding Mr. Burbage held the Krogh’s diners enrapt with little-known facts about Shakespeare, like the possibility that he may have secretly signed the 1610 King James version of the Holy Bible, and the likelihood that his marriage to Anne Hathaway (some eight years his senior) was officiated by a gun-toting father, if you catch my drift. Burbage even included a memory recitation of Macbeth’s famous “Tomorrow and tomorrow and tomorrow” speech with its pessimistic view of life itself. The presentation ended on an up-note however, with the classic Irish prayer that includes the line: “That we might recognize them by their limping.”
The patrons within earshot of Burbage gave up a solid round of applause, and those at the bar who couldn’t hear quite as clearly raised their pint glasses in appreciation—which they would have done had there been no presentation at all.
Because in some of those pint glasses, The PubScout’s included, was a delightful maibock which had won a homebrewer’s Contest as Best of Show at the NJ State Fair in Sussex County in 2011. Produced by Dave Pobutkiewicz, a Shakespearean name if ever there was one, it was very nicely balanced with a sweetish, though not cloying, taste. Dave himself was supposed to be on hand to oversee the “unveiling” of his beer at 5 PM, but was unable to attend. So the rest of us “unveiled” it for him. Stage Manager Larry took home a growler, as many others likely did, so if there’s none left when you go there, just remember the classic dictum by Shakespeare—“If thou snoozest, thou losest.”
Andrea Taylor allowed that this was her first attempt at melding a very cultural theme with the storied brewpub, and she promised to do the event again next year, perhaps on a grander scale which may include live performances of more Shakespeare scenes by costumed actors.
Shakespeare, good beer and good food in an Elizabethan-looking pub?
Count The PubScout in.

Check out the pictures here.
Posted by Kurt Epps-The PubScout at 9:08 AM