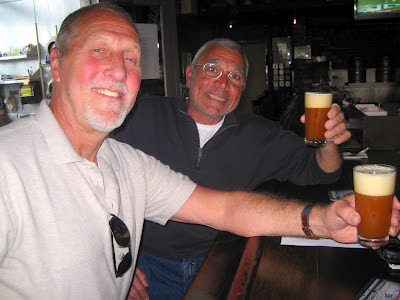 Chris Percello, Uno's brewer, put together a star-studded lineup of brews on cask today at the Metuchen Uno's, and the event was attended by an equally star-studded clientele. Mark Haynie, Jeff Linkous and Karl Mende represented the beer cognoscenti, while regular Joes like Dave Bruneyko, Gary McGrane and a reinvigorated Uncle Frank himself lined the bar to sample Chris's wares. Mike Kivowitz of  the beer savvy site NewJerseyCraftBeer.com was on hand with sidekick Ozzie, wife Lori and three-month-old son Holden. Natalie, Alexis and Alina were there to add a distaff touch to the affair, and they performed their roles superbly. Chris had two of his own beers on hand--the outstanding Ike's IPA and his own Weizenbock, which rang in at 8.3% ABV. Three other IPA's were available as well: Kane's Overhead IPA, Flying Fish HopFish IPA and Cricket Hill's Hopnotic IPA. Cricket Hill also offered and American Ale and Colonel Blides Cask Ale. Sixpoint Brewing sent an outstanding Otis Oatmeal Stout and a brownstone Brown Ale, while old Faithful Dave Hoffman proffered his clean, crisp Golden Ale.
In all, it was a quality selection, and all who attended seemed to concur. Now all Uno's needs to do is bring back those legendary beer dinners. Check out the rest of the pictures here.
Posted by Kurt Epps-The PubScout at 1:27 PM