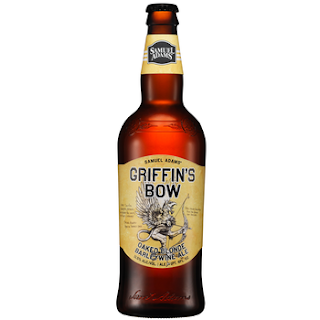 Thanksgiving at The PubScout's house is, by law, a happy, family time. The Missus outdoes herself in the kitchen, and the lads are as loud with raucous laughter and kibitzing as they were when they were tykes. It's a certain music that brings pleasure to a parent's ear (however overgrown with pinna it becomes as we age, which nobody warned us about).

The difference now is that two of the lads (who have been accompanying their father to brewpubs and breweries for many years) can legally consume, and hopefuly enjoy, the fruits of Ninkasi, the Egyptian beer goddess; and we had some outstanding examples yesterday.

We drained an entire five-litre keg of Hofbrau's Munchen Oktoberfest I had been saving for the occasion, and despite its much lighter color from that of previous years, it was delicious, on-style and Kazzy's favorite. Brett's a hophead, and he thoroughly enjoyed Hop-Shock IPA from SanTan brewing in AZ (H/T to buddy Ty for sending it) and Dave Hoffman's Climax IPA. The PubScout enjoyed a Thomas Jefferson Tavern Ale or three with Tom Turkey, and after dinner and cigars, but before dessert, I uncorked A Sam Adams American Kriek. That cork, BTW, is VERY tough to get out of the bottle, but very worth it when you do.

But the real treat of the night--with dessert--was Sam Adam's beautiful blonde barleywine called Griffin's Bow and pictured above, right. Bear in mind that barleywines are a different kind of brew and certainly not to everyone's liking. Even on the various beer rating sites, this beer gets both praised and panned. But not from The PubScout, who loved it. Poured in a snifter glass, this may be one of the prettiest beers you'll ever see, and its nose will have you sniffing far longer than customary. Fruit notes, vanilla notes oak notes all come together to make a most memorable impression--until you actually taste it. That's when the smoothness and complexity of this oak aged barleywine really shines, and for this beer drinker, guaranteed a return trip to Dan Ratti's to get more. This is simply an outstanding Fall/Winter beer, and I'd be anxious to hear reports from other lovers of the barleywine style as to how you rated it. Don't forget to use olfaction and retro-olfaction in the process, because that's when the multiple flavors explode.

In all, a most fitting ending to a wonderful day, made even better by knowing I have another Griffin's Bow in my quiver, and while everyone else is out fighting Black Friday, I'll be nurturing a blonde...

...Barleywine, of course, just in case the missus is reading this.
That's one blonde she won't mind putting under the tree.
Posted by Kurt Epps-The PubScout at 7:09 AM