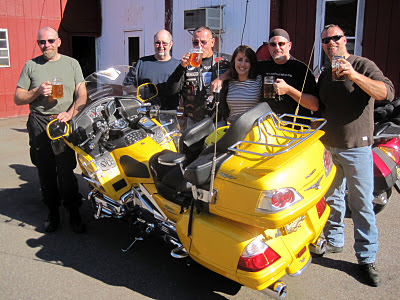 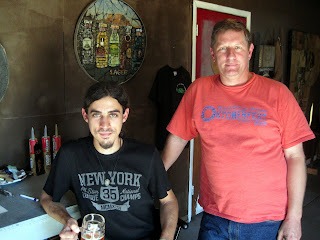 On yet another "10-best day" in October, the Wilde Hogges struck out for the hypnotic, sun-splashed roads of gorgeous central Pennsylvania. Our route took us to Jim Thorpe, then Beaver Meadows, then Mahanoy and onto the legendary PA 339. We emerged near Rt 80 and Mifflinville, and Larry decided to check if nearby Berwick Brewing was open. It was, and it was just six miles away. I confess I had no experience with any product from Berwick, but the thought of a marzen on an Indian Summer day after a great ride appealed to me. And to Larry, Ron, Steve, Tom and Jesus as well. Yes, Jesus rode with us this day. And hopefully, every day.

The Hogges pulled into the place, actually around back and dismounted our trusty steeds. Laura came out to meet and greet us, and ushered us into one of the tap areas where Berwick was just concluding its 8-day Oktoberfest celebration. She filled our mugs with an exceptionally delightful –and on-style--Oktoberfest beer, and after a few pictures, we wound our way back to the Biergarten tent to slake our thirsts and enjoy some music.

Tom Clark, the owner and a brewer for a quarter-century was on-site, and I found my way back to him where I met his young brewer, Steve Zourides. We chatted beer and took a pic, and Tom suggested I try a beer called Hondo—BB's flagship beer. It was a keller-bier and very well made, though so impressed was I with the O-fest that I had a second. My mates enjoyed their IPA and a stout named High Town, expressing their approval in glowing terms.

Tom doesn't do the GABF as it's quite costly, but I hope he does other, more local beer festivals, ad his products are good. So good, in fact, that Larry and I had to stop in an ice-cream store of Rt. 80 on the home trip to say goodbye to them. It's amazing how short a 26-mile rest stop is when you don't need it, and how far it is when you do.

In all, a super day on the bikes and in Berwick Brewing.
We will be back.