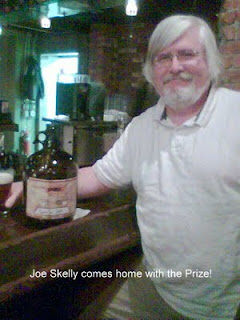 Radical Leftist gets it Right…

Joe Skelly is a hopeless liberal, so far left in his political views that George Soros probably doesn't trust him. But when it comes to beer, I sure do.

Joe visited the Sunshine State recently—probably on the government dime—and contacted me to find out some information about a brewery and beer I had reported on in my blog. I gave him the info, and Joe did the rest. He traveled a couple hours out of his way to Tampa, and located Cigar City Brewing, the brewery no larger than a garage, that just shocked the beer world by winning a Gold Medal at the GABF for its Humidor IPA. And, after emailing me to tell me this may be the finest IPA he has ever had, he arranged to bring back a gallon (which he had to personally chaperone on the train) for his buddies to sample.

And sample they (we) did. Mike Sella, Joe and I anxiously waited for the first pour from the gallon jug (Cigar City only does gallons and quarts) and the wait was well worth it. A real treat, this IPA is aged in cedar (like fine cigars) instead of oak, and the result is a remarkably smooth, eminently drinkable and superb beer which has gentle olfactory notes of cedar and tobacco dancing through the hops. One glass and you'll know why it deserved the Gold at the GABF. Being a cigar and beer man myself, this beer and a good cigar is a perfect marriage.

If you fancy yourself an IPA man or woman—with or without cigars attached, you can do one of two things: 1. Find a place that sells this stuff, or 2. Befriend Joe when he visits Florida again. Joe was kind enough to procure a quart of this godly nectar for yours truly, and I am most grateful.